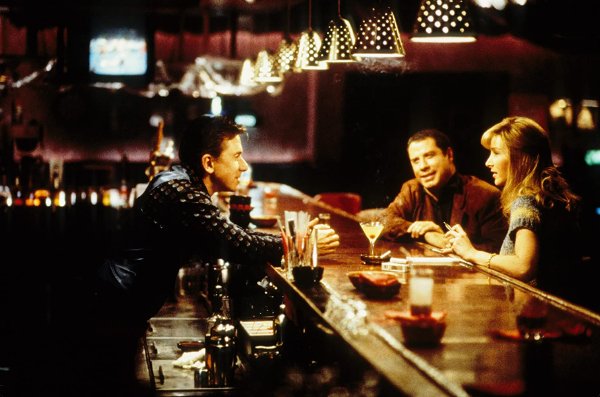 Russ Richards is the TV weatherman at WPTA in Harrisburg PA and a local celebrity who has his own, reserved table at Denny's. He is also about to lose his shirt in an unsuccessful snowmobile franchise as the city basks in the spring-like December weather. Russ, desperate to avoid financial ruin, teams up with the station's Lotto girl, Crystal Latroy (Lisa Kudrow), to pull off a scam and rig the state's lottery. Everything works out, initially, but the scheme unravels in a big way in "Lucky Numbers."

Nora Ephron, director of such sentimental schmarm as "Sleepless in Seattle" and "You've Got Mail," takes a turn with "Lucky Numbers" and enters the realm of the caper flick. Other such crime comedies, like the 1951 marvel, "The Lavender Hill Mob," or the 1972 Robert Redford starrer, "The Hot Rock," set the standard for the genre with their mixture of action/suspense, satire and broad comedy. The charm of these films lay in their strong build-up of the caper and the gyrations the principle must undertake as the well-laid plans go awry.

Ephron's entry into the genre of crime caper movies, while not at the same level as the older films, is a solid, entertaining flick that benefits from a superb cast that transcends the formula of the script by Adam Resnick. Based on the 1980 Pennsylvania State Lottery scandal, the story is by the numbers as we meet Russ Richards, a man on top of the celebrity pile in his little burg who enjoys the perks of his minor fame. His big ambition is to get out of Harrisburg and head for the big times - host of his own TV game show. But, bad investments, unseasonably warm weather and a taste of the good life are driving Russ to bankruptcy.

First, Russ tries to get a salary advance form his hard-ass boss, Dick Simmons, and is unceremoniously turned down. He next tries to hit up his old buddy, Gig, a strip club owner, but gets turned down by him, too. Gig does offer some advise, though it is highly illegal - find a beard to play a particular Lotto number and rig the daily lottery to come up with that number. And, it looks like it may be an easy thing when Russ approaches Lotto girl Crystal, a sexy and greedy young lady, with the plan and she jumps at the chance to make millions. The ball is in play, so to speak, as the couple conspires to rip the state off for a fortune.

The inept pair, against all odds, is able to pull the scam off without a hitch. Crystal's cousin Walter (documentary filmmaker Michael Moore) is pulled in to be the front man, purchasing the winning ticket. Everything seems to going fine as they successfully rig the drawing. Then things start to fall apart. Walter, realizing the ticket's worth, is no longer happy with the paltry $20000 he was first offered. He wants an equal share of the winnings and won't give up the ticket unless he gets it. Gig also wants a piece of the pie and demands a 20% cut of the total. Then, a local bookie gets wind of the scheme, prompting Gig to have the guy bumped off by his crony, the loony Dale the Thug (Michael Rapaport). Once Dale finishes his lethal task, he demands $500000 from the hapless, now scared, Russ. Things are further complicated when a malingering cop, Pat Lakewood (Bill Pullman), and his gung-ho partner Chambers (Daryl Mitchell) are put on the case of the missing bookie. Another wrench hits the works when station boss Dick figures out the crime and wants half of the money. Soon, Russ is financially worse off than before he committed the crime.

Despite the large cast of characters, the movie moves along at a brisk pace as the crime and its aftermath of greed unfold and Russ finds himself in a place, among ruthless people, that he just wants out of. Travolta, who seems to be beefing up to Marlon Brando proportions, plays Russ Richards with a mix of confidence of a big fish in the small pond of Harrisburg TV and fear of losing everything when his plans backfire. He's fine while in control of things, but breaks down quickly when they go to hell in a hand basket. Travolta is the straight man of the cast, but gets good moments as he tries, and repeatedly fails, to get out of his predicament.

The rest of the cast ably handles their various tasks. Kudrow plays completely out of her usual ditzy characters as the hard-bitten, greedy Lotto babe who thinks nothing of using her body to get what she wants. It's a different kind of roll for Kudrow, though not one I necessarily liked - Crystal may be good looking, but she is no Mother Theresa. Tim Roth and Ed O'Neill lend their professionalism to their perfs as Gig and Dick. The real comic relief, though, comes from Michael Rapaport and Bill Pullman. Rapaport's Dale is over-the-top crazy as a very loose canon. Dale, and his World Series commemorative baseball bat, does drastic damage to the various players. He's all hopped up on wine coolers and anti-depressants and will not take "no" for an answer. He's also not very bright as he tries to get rid of Jerry the bookie by taping a small brick to his wrist and dumps the body in the river. Pullman has some goofy fun as the inept cop who unwittingly breaks the case.

I have never been a fan of Nora Ephron's film work, but I have to admit that the lady does surround herself with top-notch talent behind the camera. The capable and varied lensing by John Lindley ("Pleasantville") gives the film a crisp look. Production designer Dan Davis, a three-time Ephron collaborator, catches the 80's feel, though that period is less distinctive than the 60's and 70's. Other tech tasks are also well handled.

"Lucky Numbers" isn't hurt by the formula story and benefits greatly from the talented cast. There is ample humor, though little suspense. Nora Ephron proves herself a competent filmmaker and takes on the crime caper with professional ability. It's not as wild and wacky as "The Hot Rock" (a film I highly recommend), but it has its moments and its laughs. I had a good time.