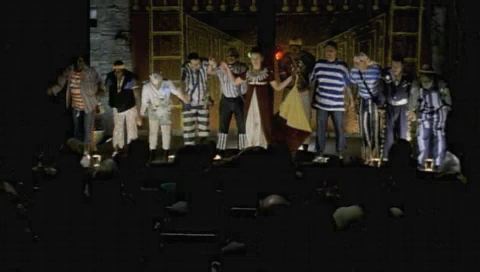 Jimmy (James Nesbitt) is a small time crook with big aspirations. He plans, with his childhood friend and fellow thief, Rudy (Lennie James), to graduate to the criminal big league - bank robbery. When things go totally wrong (even the bullets fall out of their gun) they are caught and packed off to prison. Jimmy is not one to stay idle and he gets himself into the good graces of the prison governor (Christopher Plummer) when he agrees to stage the warden's own musical play, and a breakout, in Peter Cattaneo's "Lucky Break."

Helmer Cattaneo's sophomore effort, "The Full Monty," received worldwide acclaim back in 1997 with its English working class story of some on-the-dole blokes who want to have their own piece of the pie and are willing to bare all to get it. Though the story was slow to build, the snappy, funny climax proved to be worth the price of admission in the feel good film of that year. Unfortunately, Cattaneo's third time out of the gate proves to be far less endearing than his previous effort.

Basically, Jimmy and Rudy are dolts who have no right trying to be bank robbers and their imprisonment is justified. Jimmy befriends Cliff (Timothy Spall), his cellmate, who is the put upon all the time by a cruel guard, Perry (Ron Cook), who Cliff caught in a compromising circumstance involving porno mags and self-gratification. When Jimmy discovers that Governor Mortimer, the boss of Long Rudford Prison, is a devoted fan of musicals who has written an homage to his hero, Lord Nelson, the wily con ingratiates himself to the gullible warden. With the promise that he will put on the governor's play, he also spawns a daring escape to take place concurrently with the show.

There is a fly in the ointment, however, in the guise of a pretty anger management specialist employed by the prison to help rehabilitate the inmates. Annabel (Olivia Williams) is not charmed, at first, by the blarney of the easy going Irishman, Jimmy, but, as time goes on, he slowly and steadily breaks down her resistance. Meanwhile, he recruits various member of the prison population, but only a very few at first, including Cliff, Rudy, Darren (Raymond Waring) and Roger (Bill Nighy). In order to get more to participate, Jimmy resorts to using phone calling cards to bribe other and the production takes off - but always with the hidden agenda to use the play to cloak their plans to escape. Love and loyalty gum up Jimmy's plans and he is torn with staying, to be with Annabel, and escape to freedom and it all comes to a head when the play is finally staged.

The main problem with this prison/musical/escape comedy is that it is short on laughs and long on tedium. Director Cattaneo, with "The Fully Monty," was lucky enough to have a sharp, bombastic ending that overshadowed the slow pace and over-long setup. With "Lucky Break" he is not nearly as fortunate. There is still the slow pace, an obvious plotline that offers virtually no surprises and, unfortunately, everyone keeps their clothes on in the end. It tries to be a romantic comedy bundled with a let's-put-on-a-play story used to cloak a prison break and goes through the motions for each part, but without any heart.

There are lost opportunities and underutilized characters in the script by Ronan Bennett. Darren, for instance, is serving time for arson, a point that is made several times, but his talent is not used to aid in the breakout. A menacing bad guy, John Toombes (Frank Harper), who has it in for Jimmy, is introduced into the prison but, except being an expected fall guy, the character offers little to the story. A sidebar about Cliff, a hapless victim of circumstance that landed him in prison, has him estranged form his wife and the son he adores. His is a sad, tragic note that is supposed to lend drama and angst to the proceedings but, instead feels like a tacked on extra. Even the preparation for the play is given perfunctory treatment with the finale feeling like an amateur production - and a pretty dull one, at that.

James Nesbitt, as Jimmy, does not have what it takes to lead the ensemble of characters to their destiny. The actor comes across as an average kind of guy you might know and, as such, has a problem filling the lead role as either a breakout artist or romantic interest. Olivia Williams doesn't put all too different a spin from her schoolmarm character in Wes Anderson's "Rushmore." The actress has, so far, been a one note player and, while pretty enough, doesn't provide any depth to her character, Annabel. Bill Nighy does his patented poncey character to amusing effect. Timothy Spall, as the put-upon convict with a tragic past, present and future is mis-utilized and, unfortunately, hinders the film as Cliff's plight undermines what little comedy there is in this confused tale. Christopher Plummer gives a preoccupied air to his warden character, Graham Mortimer, who would rather listen to his records and write his musical than run a prison.

The idea of having the inmates stage a musical about Lord Horatio Nelson must have been a riot on paper, but as a backdrop for a prison break it falls flat. "The Simpsons" episode where Sideshow Bob (voice of Kelsey Grammer) sings "The Pirates of Penzance" has more theatrical quality than the governor's musical, "Nelson." The play, like most everything in "Lucky Break," is slight and underdeveloped. Overall the film feels like a low-budget TV pilot that could not find a buyer to play it on the tube.