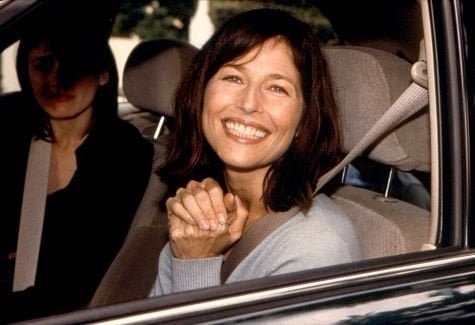 The Marks ladies are a nearly dysfunctional clan suffering from an odd combination of poor self-esteem and prideful vanity. Matriarch Jane Marks (Brenda Blethyn), long-estranged from her husband, has saved up the money to pay for liposuction treatment at the hands of handsome cosmetic surgeon, Dr. Crane (Michael Nouri). Eldest daughter Michelle (Catherine Keener) is an unambitious artist/housewife trapped in a boring marriage. Number two sister, Elizabeth (Emily Mortimer), is a budding young actress who doubts her abilities and sex appeal. Adopted Annie (Raven Goodwin), an 8-year old African American girl from a broken home and a crack head birth mother, rounds out the cast of fems in the feminine movie, "Lovely & Amazing."

In her followup to 1996's "Walking and Talking," where Keener's single Amelia had to deal with best friend Laura's (Anne Heche) marriage, Holofcener continues to delve into what makes women and their relationships tick, with the additional nuance of heredity. While the production is far from lavish, Holofcener's ensemble get big results realistically portraying life's little truths.

Michelle's a frustrated artist who designs fanciful miniature chairs that no one will buy and her husband continually steps on. Michelle's frustrated and embarrassed by the successful women around her. Bill reinforces his subconscious aggression by reminding Michelle that she's not doing her part financially, so she takes a job at a one hour photo where her teenage boss Jordan (Jake Gyllenhaal, "Donnie Darko") becomes enamored of her.

Elizabeth constantly looks for reassurance from her boyfriend Paul (James Le Gros, "Enemy of the State"), who tells her to find a girlfriend instead. She manifests her own feelings of rejection by bringing home stray dogs (whether they truly need a home or not). A chance meeting with the big movie star she lost a costarring role against (Dermot Mulroney, "My Best Friend's Wedding" and husband of Catherine Keener) turns into just the kind of date she's always wanted.

Annie is always looking for an excuse to eat. She loves to swim, but when she's teased at the pool for being fat she gets aggressive (just like Michelle, who has a mean case of sibling rivalry with the little girl), and recently she's taken to dead man's floats. When she tricks a friend into straightening her hair, mom's upset, but she finally begins to attract the kind of attention she's been looking for.

Meanwhile Jane lies in a hospital bed, stoking a fantasy that has her liposuction doctor (Michael Nouri, "Flashdance") attracted to her, while reacting to all the sibling squabblings with irritated tenderness.

Holofcener has a terrific ability to conjure breathing characters out of the quirks and ticks of human foibles. A woman sees herself through her doctor's eyes as the 'after' until she's reminded that he's more familiar with the ugly realities of the 'before.' A vain movie star becomes interested in a woman who is willing to have the veneer stripped away. Trying to sample success on the coattails of a relative, a woman painfully finds herself alone in the midst of a cocktail party. A child uses the words of her older sister against her and the shock startles. A teenage boy's mother sees a vastly different woman with her son than he does. With one (huge) exception, where she tries to be too cutely symbolic in her plotting, Holofcener's script is a winner. It should be noted that each of her adult female character's shows their maternal side by adopting strays and all require the admiration of a man for self esteem.

Catherine Keener is the standout of a strong ensemble. Keener's not afraid to play unlikable, yet because of the truth of her acting, she's always sympathetic. While Michelle complains to Bill about their nonexistent sex life, Keener makes it clear that it's self-affirmation she wants, not sex, with an impatient shrug and roll of the eyes. Blethyn finally tones it down, making Jane a breathy female who hints at a former seductress. Mortimer is sweet and shy, quite miscast in the career she's chosen for herself. Goodwin is a natural, trying to make a stand against the past that's no longer hers while trying not to drown in the present she's inherited. Mulroney gives the unexpected in a vain star who may actually be a nice guy underneath. Gyllenhaal is puppyish as the awkward yet sexy teen who goes for broke with a prickly older woman. Le Gros invests no emotion in his character.

While the technical credits aren't particularly noteworthy, set decoration in the homes of Michelle and Jane artfully reflect the characters who inhabit them.

I call this a "feminine movie" so as to not denigrate it with the less deserving handle, in this case at least, of "chick flick." "Lovely & Amazing" is an unnerving character study of a family sorely in need of a boost of positivism. Michelle, the former high school homecoming queen with an artistic flair, dabbles in her craft arts in a half-hearted attempt to turn her talents into wages. Her husband Bill (Clark Gregg) is tired of her lack of ambition and willingness to help contribute to the family's coffers. He is also cheating on her. On a whim, Michelle takes a job at a one-hour photo shop working (at $8 an hour) for teenager Jordan (Jake Gyllenhaal) who immediately becomes smitten with the 36-year old mother.

Elizabeth, with a small part in a soon-to-premier film ("you're picture is on the poster!" her agent enthuses), has a shot a regular gig on a TV series starring Kevin McCabe (Dermot Mulroney). She auditions for the part with the only instruction being that she has to be "hot." She doesn't get the part but soon attracts the advances of the hormone-driven movie star. There is a highly charged scene where she solicits McCabe's honest opinion of her body and he, bluntly, gives it.

Jane sees her pending outpatient surgery as a chance to reclaim lost youth and, in delusion, believes that her doctor harbors a mutual attraction to her. The routine surgical procedure does not go routinely and mom ends up, unconscious, for days. Meanwhile, Annie, now without her adopted mom present, asserts her individuality, has her kinky hair straightened, copes with her eating obsession and tries to press on with life despite her oddball family's ways.

Catherine Keener is terrific and nearly unlikable as the bored and boring Michelle. The character is sans ambition and walks about with an attitude of me-me-me. Her marriage is nothing, with only her daughter as a happy spark in a dreary home. Brenda Blethyn has the tough task of being unconscious for the bulk of the film. She still comes across as the neurotic source of the seeds that developed into lack of esteem in her daughters. Emily Mortimer is perky as Elizabeth and wears her burden of upbringing differently than her elder sister. She is pretty and talented, but the legacy of her family bears down to make her life unnecessarily complicated.

Little Raven Goodwin, as little Annie, is a natural and stands toe-to-toe with her far more experienced costars. Annie is the only one who is getting her act together despite the fact that she is the one who had two strikes against her from the start - being black and born to a crack head. Her story makes you want to smack her elders for being so shallow and selfish.

Helmer Nicole Holofcener's original screenplay does not give much shrift to the men in the story. This is a woman's yarn first and foremost and the guys are little more than stick figure symbols. Mulroney is arrogant and charming as the gets-what-he-wants movie star. James Le Gros is wasted as Elizabeth's live in boyfriend who has grown tired of her insecurity, self-esteem problems and narcissism. Clark Gregg is a cardboard cutout as Michelle's husband (though not, I think, the actor's fault.) Nouri is suave and reassuring as the surgeon that may have screwed up with Jane's operation and just covers his ass.

Straightforward techs don't call attention to themselves, leaving the spotlight to the team of very capable actors in this character-driven feminine tome. Sophomore helmer Holofcener tells a complex story of the lives of a nuclear, woman-dominated family that is wrought with neuroses. The feminine tone of "Lovely & Amazing" is not going to draw droves of guys, except to make points on a date. I, personally, felt emotional clobbered as the ladies, in the end, get through life's problems.