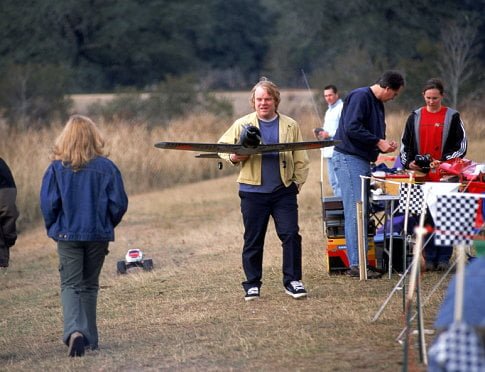 When web designer Wilson Joel (Philip Seymour Hoffman, "25th Hour") loses his wife to suicide he begins to numb himself from the pain by inhaling gasoline fumes. In denial from the real world, Wilson backs away from his professional life and mother-in-law Mary Ann (Kathy Bates, "About Schmidt"). As he latches onto the world of remote control hobbyists, Mary Ann covets the contents of the unopened letter he carries, signed "Love Liza."

While it is clear that there is a lot of talent both behind and in front of Lisa Rinzler's ("Three Seasons") camera, "Love Liza" remains an intriguing experiment which fails to fully engage. One can only assume that the jury who bestowed star Hoffman's brother Gordy with the Waldo Salt Screenwriting award at 2002's Sundance Festival were honoring an attempt to do something different over actually pulling it off.

Wilson retreats from those, like Mary Ann, who attempt to comfort him. His boss Maura (Sarah Koskoff, "That Thing You Do!") becomes concerned when she drops by and smells gas emanating from his home and Wilson manically concocts a story about 'having planes.' Maura then sicks her brother-in-law Denny (Jack Kehler, "Men in Black II"), a remote control geek, on Wilson, who scares up an assembled plane from a local hobby shop and goes along with Denny's enthusiasm. Maura then tells him 'something inappropriate' and Wilson panics, hitting the road and desperately attempting to hook up with a gathering of hobbyists. Denny comes to the rescue only to be alienated, like Mary Ann. When all Wilson's crutches have been pulled away, including a fantastical contracting position with businessman Tom Bailey (Stephen Tobolowsky, "Memento"), he's finally ready to face the truth and come up for oxygen.

"Love Liza" is meant to be a comedic look at grief, but the comedy is far too gentle to be recognizable most of the time. Tyro director Todd Louiso (most well known as the meek record store clerk of "High Fidelity") is too subtle in linking Joel's gas huffing to his wife's suicide (we're never told how she did it) and too obvious equating his grief to a reversion to childhood (Hoffman doesn't help matters in this regard. In an otherwise solid performance, his behavior at the remote hobbyists' gathering is too broad). There is no examination of the Joels' marriage after Wilson declares 'I loved well!' The script's insistence in pulling back Bailey's character, a potential client at Joel's old job, doesn't ring true and only works to remake a point that has already been made. Mary Ann's final action is completely over the top and unbelievably set up. The film's final shot is a twisted version from 1979's "Being There," but what worked for that protagonist's journey into an uncomprehending world doesn't here.

Hoffman is always interesting to watch, but this film only allows him to veer from outburst to stupor to false gaiety. He's most successful portraying the rationalizations and connivings of a drug addict. Likewise Bates seems caught between a desire to offer comfort and the greedy need of her own grief. Support is solid across the board, particularly from Kehler, who gives Denny an obsessive weirdness without losing sympathy for the character. Koskoff's Maura is a shy woman hiding behind her professional demeanor. Douglas Cullen ("Sunshine State") is fun as a ridiculous pancake house employee in a scene that is otherwise gratuitous.

"Love Liza" has some interesting ideas, but none of the focus Liza had constructing her last note.