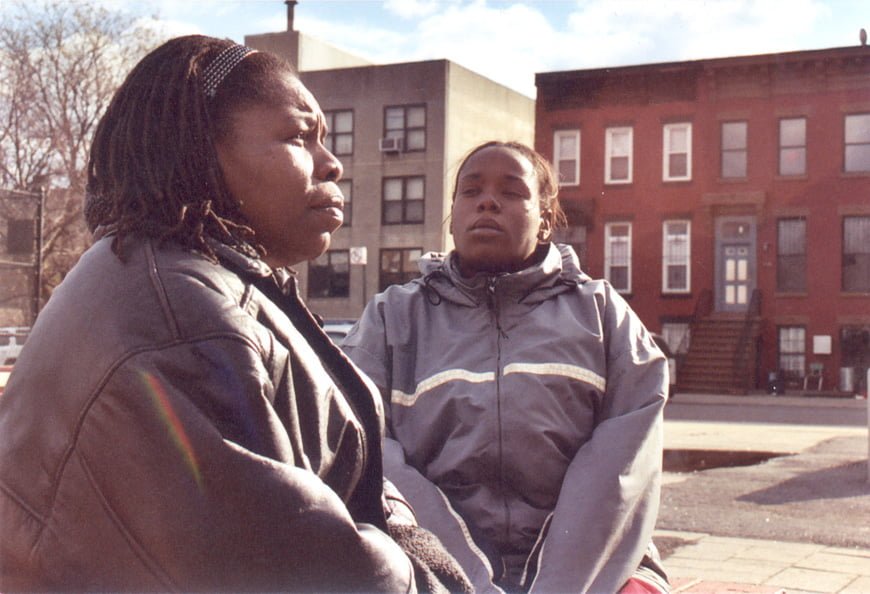 When director Jennifer Dworkin heard about former crack addict Diane Hazzard's attempt to pull her family of five children back together after having splintered it apart within New York City's child welfare system, she thought the family would make an interesting documentary subject. But she found a story within that story in the relationship of Diane and her second eldest daughter, Love Hinson, an HIV+ eighteen year old who, as the film begins, has just given birth to her first son Donyaeh in "Love & Diane."

With festival award winner "Love & Diane," Dworkin has created a film that is both intimate and epic, a compelling observation of the labyrinthine state welfare systems which frustrate with cross purposes and the cyclical nature of abuse and neglect. It is also the story of the indomitable spirit that is Diane Hazzard.

Things seem rosy at first, despite the bad history they've been built upon. Love and her sisters Trenice (16), Morean (14) and younger brother Willie (older sister Tomeka lives separately and older brother Charles has committed suicide) live with their mother and all dote upon the adorable Donyaeh. Donyaeh's status under Diane's medical care allows them rental assistance and the family moves into a larger, airier apartment and pray for togetherness. But Love suffers from the same clinical depression as her mother and her inability to forgive her mother as well as her guilt over her baby's potential HIV status makes her explode in rages. Diane seeks help in dealing with the family situation and ironically sets off a chain of events that cost her her new apartment and her daughter her child.

Dworkin stays invisible, documenting the drama from within and alternating with commentary from Love and Diane, who use the video camera as confidante. Using old black and white photographs and video footage that suggests home movies, the director fills in her subjects' backstories as they narrate. We learn that Diane only ever saw her mother three times and that she was drunk the second time and dead in her casket the third when Diane was only eleven. Love repeatedly ran away from foster and group homes and spent time on the streets. A photograph of Diane at sixteen with her first baby uncannily reflects the same startled expression of a picture we've seen taken of Love with Donyaeh.

While Love often appears to be her own worst enemy, we can't help but root for the troubled woman. An early bit of elation comes when Donyaeh's HIV test comes back negative - a positive event for people who are more used to being dealt crushing blows. As Love struggles for over a year to get her son back (all the while fitfully ditching mandatory therapy sessions when she apparently needs them most), Diane depends on her newfound faith to put the past behind her and soldier on. She's positively girlish picking out an outfit for a work training program she hopes will get her off of public assistance,
declaring her love for offices, suits, stockings and heels. Despite their lack of education, both woman not only understand their identities, they can effectively communicate what's making them tick.

If there's a fault with Dworkin's film, it is that it tends to accentuate the positive. The sisters who tease their mother on New Year's Eve when her resolutions apparently have been recycled for three year's running, show only affection. There is no sense of the dysfunction we hear so much about but only witness in a few heated arguments between Diane
and Love. Diane's acceptance of Willie's decision to leave her home and alternate between the streets and a group home is puzzling, as is her absence from Love's new home with boyfriend Courtney as Love slowly builds a foundation for Donyaeh's return. Only one small note of discord is evident between Courtney and Love and the impact of her disease on the relationship is never mentioned.

Still, with the focus on "Love & Diane" Dworkin delivers a strong portrait of a mother and daughter's guilt, love and determination.

Documentary filmmaker Jennifer Dworkin spent years on her work about a 40 something former crack addict, Diane Hazzard, and her family. Diane's story begins at the point where she has regained custody of her five remaining children from their foster home environment. Love, a 19-year old new mother and the eldest of the children, had just given birth to her son, Donyaeh, an HIV-positive baby. But this tragedy has a bright side as Diane can get public assistance for Donyaeh's care and leave East New York for a bigger, nicer apartment in Flatbush. For the next 2½ hours we are immersed in a critical period in the life of a struggling American family in "Love & Diane."

I found "Love & Diane" to be far too long for the theatrical venue I saw it in and thought it better suited for the small screen. But television, particularly PBS and IFC, is exactly where this fine observation of an American family belongs as we observe Diane's striving to turn her life around and bring back the family that she had nearly lost forever because of her years of addiction. Love is also a focal character in this drama, who, at first, embraces motherhood but, as time goes on, looses interest and shirks her responsibility to her wonderfully good-natured baby. As baby Donyaeh grows before our eyes we are taken on a personal journey of a family trying to mend its longtime, nearly fatal wounds.

The ensuing years - we attend two birthdays for Donyaeh - are wrought with, among other things, child welfare taking Diane's children away to foster care once again when she unthinkingly turns Love in for not caring for her child. She loses the rent subsidy that the baby's presence provided and Diane struggles to get back her family. She is also haunted by the suicide of her eldest son years before. In the meantime, Love gets legal assistance in her quest to get back her own baby but her struggle is a long upwards climb as she has to get her attitude under control and work with the system if she wants her child back.

Filmmaker Dworkin gets solid video footage of the life of this matriarchal family in inner city New York, keeping out of the picture and using the roving eye of the camera to keep things moving visually. The obvious comfort level with her subjects permits Dworkin to get sometimes gut-wrenching, raw emotion from her subjects who are at the bottom of society's food chain, depending on the governments for their support and rehabilitation. And this is what "Love & Diane" is all about - the rehabilitation of a woman and her family. When the credits roll and we find out what happened to the Hazzards it isn't all happily ever after but there sure are a lot of positive things in their lives.

The forthright honesty of Diane, Love and, to a far lesser degree, the rest of the family - Love's fiancé, Courtney, is present in much of the film but is nearly silent throughout - makes "Love & Diane" a mesmerizing watch. The inner strength and desire for a better life of Diane and volatility of Love are more than enough to observe and absorb. This is an ideal documentary for a two-part POV on public television and is a remarkable feature for docu-maker Dworkin.