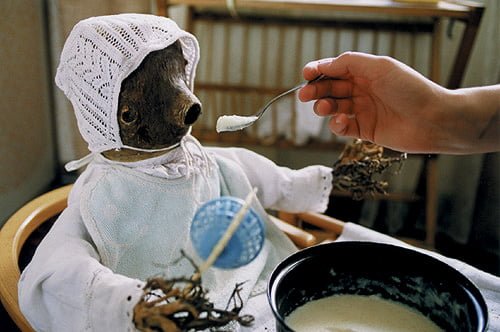 The Horaks yearn for a baby but their prayers remain unanswered until Mr. Horak digs up a provocatively shaped tree stump. Mrs. Horak's obsessive love for her Little Otik brings it to life, but the baby becomes the monster of a folk tale, devouring their postman in Czech filmmaker Jan Svankmajer's "Little Otik."

Surrealist animator Svankmajer ("Alice"), whose short films have been unsettling audiences and influencing filmmakers with dark sensibilities since the 1960s, understands that true horror is found when the ordinary takes on characteristics not found in nature. Combining stop motion animation with live action, Svankmajer recreates a fable that could have come from the blackest pages of the Brothers Grimm.

We immediately know we're in the hands of a true artist when the Horaks watch the lucky receive their babies. Lining up in the town square, a fishmonger-like merchant uses a net to scoop naked infants out of a tank beside his stall before weighing them and wrapping them in newspaper.

Mr. Horak soon regrets giving the anatomically correct log to his wife. He's embarrassed when she tells neighbors she's expecting as she wears the pillow paddings she's created, numbered 1-9. Otik is bonneted and blanketed but is still all bark and no bite. But Horak is horrified when he returns home one day to find his wife suckling the slurping sapling.

Divided by their differing feelings for their strange, now living child, the Horaks soon must face the infant's insatiable appetite. After their cat and then the postman disappear, Horak takes matters into his own hands, but a strange neighbor child, Alzbetka, lets Otik's reign of terror continue as she tries to find him food.

While Otik is truly a macabre sight, made even more horrific by Svankmajer's animation, this simple fable can't sustain it's run time. Still, as Lynch must surely have been influenced by Svankmajer, the Czech returns the favor by issuing his own warped take on the horrors of parenthood. It's a Czech "Eraserhead" featuring "Twin Peaks'" Log Lady.

Eastern European, especially Czech, animation from the 60's had a profound and disturbing affect on me during my formative teen years. The weird, eerie animation style, dark humor and harsh, cynical view of society bothered me to the point of nightmares, making me shirk the regional art form ever since. I was suspicious when I found out that we were going to watch a screener of a live action fairy tale, "Little Otik," by helmer Jan Svankmajer. My fears were realized when I learned that the director is considered the father of Czech animation, but, by this time it was too late and I already watched the strange little Pinocchio-esque monster movie.

When a childless couple is desperate to have a baby, what do they do? Well, if they are in a Svankmajer movie, they create, from nature, a child of their own devise. For the Horaks, it starts with a tree stump that Mr. Horak finds in the forest that looks, surprisingly, a lot like a baby. His despondent wife is willing to accept the leap of faith and, with, a little love the couple have an imaginary child of their own. But this grim fairy tale takes an unexpected turn. The new dad comes home one day to find their little splinter suckling hungrily at mom's breast. Soon, this isn't enough and the wee twig begins to require more and more food. Then the cat goes missing. Then, the postman is eaten. Now the Horaks have a real problem but motherhood is too strong a force and Mrs. Horak will brooks no harm to her ever-growing, always hungry "baby."

One thing I have to say about "Little Otik" is that it is certainly is different than anything else that is gracing the theater screens today. Actually, it's pretty different from anything on the screen in years. This is a work of weirdness that would make the Grimm brothers proud with its bizarre story and strange twists and sickening turns. Techs are marginal with a home-movie look that is quaint and fits my distorted vision of Czech animation - life is breathed into the collection of twigs and logs that is little Otik and helps reinforce my deluded attitudes about the genre.

The draw of "Little Otik" is for fans of the bizarre that can enjoy the medieval fairy tale and understand and sympathize how the Horaks can accept and raise the monster in their home. The sick humor may also have something to do with it.