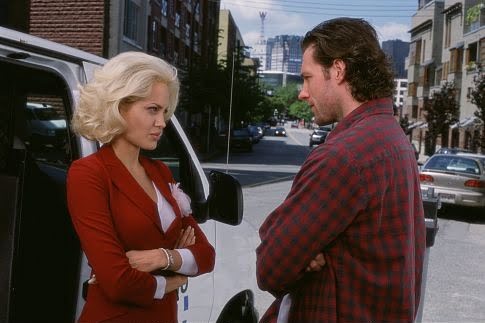 Lanie Kerigan (Angelina Jolie) has everything going her way - her boss at KQMO has submitted her as a candidate for a network morning show and she's engaged to pro ball player Cal Cooper (Christian Kane, "The Broken Hearts Club"). The fly in her ointment is Pete (Edward Burns, "Sidewalks of New York"), the cameraman she's assigned to work with at her Seattle affiliate. He introduces her to spot subject Prophet Jack (Tony Shalhoub, "The Man Who Wasn't There") who predicts that the Seahawks will win, it will hail in the morning and Lanie will die next Thursday. Suddenly, Laine's seriously assessing her "Life or Something Like It."

Director Stephen Herek ("Rock Star") captures the first natural performance from Jolie, who's finally not playing a weird, rebellious tough chick. The unusual pairing with Edward Burns, always a reliable romantic lead, clicks in this melding of "The Family Man" with "Serendipity."

It's unclear why Lanie dislikes Pete so much. Maybe it's the way he can pinpoint her motivations so well, saying that everything she does is calculated to foster an image. Maybe it's the way he brags that he's the only cameraman who can get her platinum cotton candy hair to look naturally blonde. Lanie shows a chink in her armor, though, when colleague and best friend Andrea (Melissa Errico, "Frequency") admits to having slept with Pete and liking it.

When the homeless street prophet proclaims her fate, Lanie first tries to prove him wrong. Failing that she begins to let her hair down in some serious ways, culminating in a hilarious drunken broadcast which results in two diametrically opposed lifestyle changes.

The screenplay by John Scott Shepherd (story and screenplay, "Joe Somebody") and Dana Stevens ("For Love of the Game") takes aspects of "It's a Wonderful Life" and blends them with every romantic comedy that rips its heroine from the arms of the wrong guy. Their attempt to flesh out Lanie's driven motivation by giving her an emotionally closed dad (a wooden James Gammon, "The Cell") and a grasping, competitive sister (Lisa Thornhill, "The Family Man") is weak and they play too fast and loose with their plot logic.

It's the lead actors who make this piece work. Jolie is appealing and believable as a hurt little girl masquerading as a shallow career gal. Playing Lanie Kerigan was a smart choice on Jolie's part, softening her own image. Burns is a natural as the caustic but supportive sensitive male who also happens to be a bit of a ladies' man. Gregory Itzin ("Evolution") gets some chuckles as Dennis, sound guy to the bickering couple. In a tiny role, Stockard Channing makes a strong impression as Deborah Connors, a Barbara Walters type journalist. Shalhoub doesn't appear to be particularly inspired with his role as the pivotal prophet. Kane provides the pretty face of Laine's equally shallow fiance while Errico is a fresh face as Laine's supportive and honestly noncompetitive friend.

Cinematography by Stephen H. Burum ("Snake Eyes") is crisp and bright and indulges in its bicoastal locations of Seattle and New York. Time lapse photography is well used to remind the viewer about the passing of Lanie's precious hours. In shaping the film, however, director Herek and his editor Trudy Ship appear to have left lots of Burum's lensings on the cutting room floor as some transitions are awkward. The score by David Newman ("Death to Smoochy") fits the bill.

"Life or Something Like It" is more like it for Jolie. Angelina is appealing doing the girly girl thing.

Lanie Kerrigan (Angelina Jolie), since she was a little girl, has dreamed of being a famous reporter for a major network news show. She is on the verge of just such an opportunity when a homeless street sear, Prophet Jack (Tony Shalhoub), tells her that her life is meaningless AND she will die in a week. When his other predictions come true, she realizes that she must re-examine her life, or, at least, what is left of it in "Life or Something Like It."

Helmer Stephen Herek has had an eclectic career, directing films as varied and different as "Rock Star," the live-action remake of "101 Dalmatians" and the critically acclaimed drama "Mr. Holland's Opus." So, I guess it's time he faced his greatest challenge to date - trying to keep star Jolie's breasts from upstaging the actress. I had said, after seeing her "Lara Croft: Tomb Raider," that her boobs should have received their own credit. And while "Life or Something Like It" is a better film than "Raider," Jolie's ta-tas are, even in a progression of well-tailored suits, once again prominent characters that should receive their own credit. But, I digress and obsess.

The platinum blonde, Marilyn Monroe-looking Lanie is an up-and-comer in the Seattle TV news business and has proved, time and again, that she is willing to give 110% to land her dream job on network TV. Reluctantly, she accepts a field assignment working with cameraman Pete (Edward Burns), a man with whom she shares a mutual loathing, especially after he introduces her to Jack, a potential human-interest story for her Seattle TV station. She initially disdains the soothsayer's dire prediction of her imminent death. Then, he accurately prophesies the night's big football game when the underdog Seattle team wins, 17-13, just as he said, and more of his predictions come true, too. The ensuing panic that Lanie feels forces her to take a long, hard look at her life. Things gotta change, that's for sure, and she only has a week to do it.

Beneath the main story of life re-examined, priorities changed and final redemption for Lanie, there is a routine but nice little romance between the ambitious reporter and Pete. They are always at odds and their bickering is non-stop, but everyone - the other characters in the movie, me, the rest of the audience and even the usher sneaking a peek at the flick - know right away that these two are destined to be together. I guess if they figured out they were in love right away then there wouldn't be a movie to watch.

Angelina Jolie gives a mixed-bagged performance. Sometimes she is annoying, affected and just plain selfish (not an attractive trait); other times she endearing and funny. This is the actress's first foray into comedy (some might say that she and her hairdo were the comic relief for "Gone In 60 Seconds) and, while she is no Lucille Ball, she does get some smiles (and her boobs are terrific, but didn't I say that already?). There is a neat little romantic comedy going on between Jolie and costar Burns that develops a chemistry by the end. Burns is charming as the working class cameraman with a wry and feisty sense of humor that puts Lanie off - at first.

There is little going on in the background, supporting character-wise, aside from the marvelously weird Tony Shalhoub as Prophet Jack and Stockard Channing as the bitch on wheels, Barbara Walters-like, network news superstar Deborah Connors. Jack is truly possessed by "something" and although he doesn't understand why, he knows he can foretell the future. Channing, in what is almost a cameo role, puts a solid spin to her perf as the powerful, but not too powerful, Deborah. After that, there's not a heck of a lot of thesping allowed for the background players.

Herek does an expected good job in harnessing, so to speak, the talents of Jolie and, to a lesser degree, Burns. The screenplay, by Dana Stevens, mixes romance and mirth in good measure with a little earnest earthiness and caustic humor from Prophet Jack. Other techs are up to the task with high praise, from me, for Jolie's costuming by Aggie Rodgers and frequent close up camera work by Stephen H. Burum, who seems fixated on the star's full lips. Hey, we all have our manias.