Life as a House 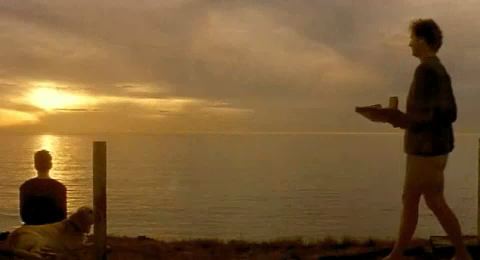 George Munroe (Kevin Kline) lives in a dilapidated house inherited from an abusive father. He's divorced, estranged from his teenage son Sam (Hayden Christensen) and hates his job. He's also learns that he's dying of cancer. Now, with only months to live, he decides to rebuild the house and his relationship with his son in Irwin Winkler's "Life as a House."

When we first meet George, he is coming out of his run down shack in a pair of dingy white briefs and nothing more. His neighbor, Colleen (Mary Steenburgen), and her daughter, Alyssa (Jena Malone), get an eyeful as he performs his daily ablutions in full view of everyone in the ritzy neighborhood. Right away, we know that George is a man who simply doesn't care about appearances. This uncaring attitude extends to his workplace, an architectural design firm, where he refuses to get with the new millennium and use computers to create his designs. He loses his job, rampages through the office destroying the miniature displays he so painstakingly created, leaves the building and promptly passes out on the street. We know that George has bigger problems than losing his job when he lands, alone, in the hospital.

George's sudden confrontation with his own mortality triggers a need within to resolve long-standing problems with his estranged family. He doesn't tell his ex-wife, Robin (Kristin Scott Thomas), of his plight, only that he wants to spend the summer with his son and rebuild his house. Sam is less than thrilled with the prospect of spending months with a father he loathes, especially when he has the chance to get away with his friends and spend his time getting stoned. George demands that his son forgo his summer plans and the boy moves into dad's shack, much against his will. As George begins to tear down, and then rebuild, the family manse, he also does the same with his relationship with Sam.

What keeps "Life as a House" from wallowing in maudlin melodrama is the performance by Kevin Kline and the chemistry that builds between the veteran thesp and Hayden Christensen's Sam. Kline has the unusual ability to switch between drama and comedy in the blink of an eye and that talent is what keeps the film from falling into the morass of unrelenting melodramatic earnestness. Kline is the glue that holds the film together and is the reason to see this film, especially if you are a fan of this talented actor. He shows the ravages of his disease via body language and needing a shave, without subjecting himself to massive weight loss and the actor is confident and comfortable in his role.

Christensen, the next Anakin Skywalker in the upcoming next entry in the "Star Wars" series, makes a solid big screen debut as Sam. We first meet the sullen, troubled young man as he huffs paint fumes and performs autoeroticism as he hangs himself from a closet pole. It is obvious that Sam has problems stemming from his parents' breakup years before and he vehemently resists George's overtures to make amends. The young actor works well with Kline and puts an arc on his performance as his relationship with George goes from angst-ridden to one of father/son bonding.

The supporting cast does its best to flesh out the ancillary characters around George and Sam, but is given little to do. Kirsten Scott Thomas is fair as George's conflicted ex whose current marriage has fallen on hard times. Mary Steenburgen, as George's neighbor and, briefly, girlfriend gets her own slice of the film as a middle-aged divorcee who has not given up on enjoying life. Jena Malone, as Sam's love interest, Alyssa, is a pretty little vixen that introduces sexual complications to both Sam and George. The rest, including Scott Bakula and Sam Robards, are given little do .

Techs are straightforward with a nice oceanside location and striking photography from veteran lenser Vilmos Zsigmund. The production design, by J. Dennis Washington, makes the phases of George's house, from destruction to rebuilt completion, an integral part of the film. I did find one significant continuity problem as we see the sun both rise and set to the west of George's home. Irwin Winkler, known mainly as a producer, helms the effort and directs his large cast without much panache, giving a yeoman's, rather than auteur's, effort in marshalling the crew on both sides of the camera.

The script by Mark Andus is steeped in the melodramatic and is saved, pretty much, through the acting efforts of Kevin Kline. The story has a cluttered feel with too many sidebars that are a distraction rather than making it dynamic. For example, Sam is not just a disturbed young man with a drug problem. He is also on the fringes of homosexual prostitution with one of his high school friends acting as his pimp. That same friend is also romantically involved with George's neighbor Colleen. Hell, they could have made a movie about the exploits of this kid, Josh (Ian Somerhalder). The script tries to prove that more is better, but this is not the case in "Life as a House."

The emotional levels attained in the telling the story of one man's waning life and the rekindling of the relationship with son and ex-wife are sure to jerk the tears from some of us more sentimental types. This makes "Life as a House" an obvious button pusher. Kevin Kline and solid production values raise it from the doldrums.