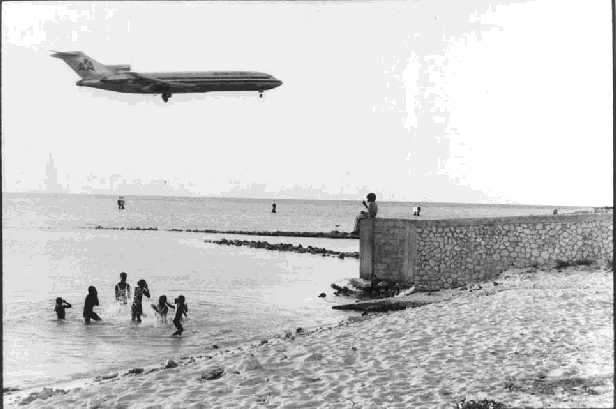 Immediately following World War II there was no Third World. The major powers that colonized and controlled the planet were forced to relinquish their hold, granting grudging independence to scores of new nations. When these budding states sought private funding for such things as education and medicine they were denied out of hand. Enter the International Monetary Fund, the organization that promised to save the former colonies, but documentary filmmaker Stephanie returns to Jamaica and tells a very different and disturbing story in "Life and Debt."

"Come to Jamaica and feel all right," says the song in the ads, but documentarian Stephanie Black makes the argument that little has really changed since the days when Jamaica was populated by European masters driving African slaves. Using Jamaica as a prime example of a third world country, Black shows how the World Bank and the International Monetary Fund, ostensibly working for reform, are destroying small nations' ability to be self sufficient and driving them further into poverty in "Life & Debt."

Black uses Jamaica Kincaid's non-fiction book, "A Small Place," for the narrative framework (spoken by Belinda Becker) of her film, which contrasts the tourist's perception of Jamaica with the reality lived by its people. Becker's melodic voice makes factual statements on the pleasures to be found there, then retorts with accusations of ignorance.

From this framework, Black alternates into a more traditional documentary style, first presenting former Prime Minister Michael Manley, who lays the groundwork of Jamaican independence and the bind he found himself in when economics forced him to ask the IMF for a loan. As the World Bank and IMF's biggest shareholders are the U.S. and other Western powers, their approval is essential. Money will not be provided unless trade barriers are lowered, flooding small countries with cheaper goods that gradually run local industries out of business. In the most disgraceful example, Black shows how imported U.S. milk powder crushed a thriving dairy industry, forcing farmers to let their fresh milk bleed into the ground. While the powder is cheaper, its processing is more expensive, so that ironically, when Jamaica is no longer able to produce fresh milk, the lower quality substitute will cost more.

Jamaicans are forced to find work in the Kingston Free Zone, where goods are shipped in for cheap assembly from foreign countries. The Free Zone is not under Jamaican jurisdiction and workers cannot unionize, resulting in sweat shop conditions. Unrest and soaring crime rates result.

While the subject is complex and sometimes difficult to follow, Black uses enough examples to get her message across loud and clear. Local music is used to comment on the subject "Circumstances made me what I am, Was I born a violent man" sings Buju Banton, while Bob Marley's "One Love" sounds more and more plaintive.

"Life & Debt" is a particularly powerful film in today's climate, when Americans are more open to questioning why their country isn't necessarily loved as much as they believe it should be. The biggest irony of Black's film is that it could have an unintended backlash, negatively impacting Jamaica's last flourishing industry - tourism.

In 1962, Queen Elizabeth of Great Britain granted the island colony of Jamaica its independence. Then England turned its back on the fledgling nation and left it with a struggling economy, little education and an antiquated medical system. The debt-ridden island, along with other Third World states, turned to the private banking sector for assistance only to be flatly rejected. The IMF and the World Bank had lots of cash that they are willing to part with to "help" those needing it. Desperate, many nations take the proffered cash, but there are many strings attached to the needed dough. Stephanie Black examines the enormous power these organizations hold over Third World nations, like Jamaica, in the scathing, eye-opening treatise on the New World Order.

The beautiful island paradise of Jamaica has long been a tourist destination for travelers to enjoy the inexpensive hospitality of this famous vacation retreat. Every morning, as the tourists enjoy the charms of the island, thousands of Jamaican women trek from their homes to Kingston's "Free Zone," where western corporations cheaply employ these workers to assemble the imported materials into expensive products shipped immediately to outside markets. The workers, whose minimum wages is $30 a week (say that to yourself: $30 a week), could not possibly afford the very things they make. Other under-educated Jamaicans flock to the tourist resorts to take the low paying, menial hotel jobs, while still other islanders, with no jobs at all, eke out a living selling souvenirs or braiding hair for the vacationers.

Black utilizes a variety of docu styles to convey her detailed, informative and well researched look at the cause and affect of the globalization of the world's economies. Former Jamaican Prime Minister Michael Manley is extensively interviewed to give an intelligent viewpoint and, I think, an honest one that is sometimes juxtaposed with newsreel footage of the PM back in 1976. We learn, through Manley and many others from all walks of Jamaican life, of how the IMF fostered the high-interest loans that the country needed so badly for education and medical reform. The only problem for the Third World countries is those darn strings held by the IMF: devaluation of local currency to increase exports (except, with local money devalued, it requires more of the country's limited resources to simply pay off the interest on a debt amounting to billions of dollars); cut social services, like the education and medical facilities that Manley and others worked so hard for, to cut costs; and keep the Jamaican government from interfering in potentially profitable international trade, like imposing local tariffs to protect the island market economy.

The impact of the IMF mandates on Jamaica (a microcosmic analysis of a problem plaguing many Third World nations) over the years has meant the demise of many local industries. Docu time is spent to clearly explain and show how the IMF "investment" resulted in the extinction of a thriving dairy industry in favor of under-priced, American-subsidized powdered milk. Agriculture, too, suffered greatly as shiploads of cheap produce is shipped in from Miami so the locals can't compete against the giants like Chiquita, Dole and Del Monte and when it comes down to machete versus machine, guess who is going to win. At one point an IMF spokesman advises the Jamaicans to grow peppers and, after all, they do have tourism.

Black dissects other aspects of the decaying Jamaican economy that has become a dumping ground for cheap goods. Even the chicken industry is not exempt from the intrusion from big business as shiploads of American-rejected dark meat parts are offered to the islanders at a fraction of the cost of local grown, high quality hens. But cheap has its own price when a shipment, estimated to have been frozen for 28 years (yes, that's years), arrives. When the deception is uncovered, the shipper declared that it was all a mistake, that the load was actually destined for Haiti. The Jamaicans did not release the ancient fowl to its dishonest owners to dupe yet another struggling country.

Besides the talking head quotes with Manley, Black utilizes extensive interviews with the farmers that lost their businesses because of "free trade"; the workers that work as near slave labor making the Brooks Brothers shirts that American pay exorbitant prices for; and the clinical analysis by IMF Deputy Director Stanley Fischer that gives a polished veneer to an institution that is more concerned with profit than the quality of human life and the dignity of man to work an honest job.

There is a relentlessness to "Life and Debt" that could have been tempered by a little judicial editing to cut the preach factor, but this is a minor quibble. It is an enlightening look at the state of the Third World as it struggles through the post-colonial world and into the new millennium. It also notes the incredible power and influence wielded by the IMF and World Bank as they strive for absolute control over the global economy. Little guys, like Jamaica and Haiti, are mere pawns in the perpetuation of this control and it will take a great deal to overcome the absolute uniformity the New World Order dictates.