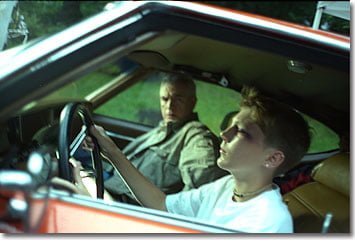 Fifteen year old Howie Blitzer (Paul Franklin Dano) is materially well off, but his mother's been killed in an accident on the Long Island Expressway, the road which leads out into the world, but where much is lost. His father's attentions are on a new girlfriend and covering up his construction firm's illicit dealings on a government project.  Adrift Howie's drawn to Gary, a pierced, tattooed bad boy who involves Howie in robbing homes much like his own.  When they hit the house of Big John (Brian Cox, "Rushmore"), who sees but does not catch the kids in the act, Howie discovers that his buddy Gary has a secret life selling himself to men on the "L.I.E."

Howie seems to be the only person unaware of Gary's extracurricular activities. His dad, Marty (Bruce Altman, "Girl, Interrupted") instinctively doesn't trust Howie's new friend and his guidance counselor (Marcia DeBonis, "Judy Berlin") is fishing for him to come out, as are Howie and Gary's fellow thieves Kevin (James Costa, "Joe the King") and Brian (Tony Donnelly, "The Sixth Sense").  While Howie may be innocent of Gary's secret, he does jump at the invitation to run away to California with him.  During this exchange Cuesta inventively films, from Howie's perspective, Gary looming over him, pinning him down, threatening him with regurgitated mucus much in the way a lover would come at him with a kiss.

But Gary's a self-preservationist who's deflected his own crimes onto Howie. Howie's shocked when Big John stops him in the street, demanding back the guns he and Gary stole.  Howie and Gary literally exchange places as Howie enters Gary's ramshackle bedroom to retrieve Big John's gun, while Gary finds his picture tucked inside Howie's diary before absconding with Marty Blitzer's slush money.  Howie returns a gun to the home of Big John, who makes it clear he expects to be paid in trade for the second, unrecovered one.  But when the law catches up with Marty Blitzer, Big John becomes a surprising father figure.

These are the most prominent, although not the only exchanges in Ryder's script, where characters don't always behave as we'd expect, but always remain real.  Big John, who claims to like women yet lives with Scotty (Walter Masterson), a dimwitted aging teen clearly resentful of Howie, is astonished by the sophistication Howie exhibits in appreciation of the arts.  Howie is in turn intrigued by Big John's vintage car and special forces, ex-Marine past ('like James Bond, except he didn't blow boys').

The kids are all terrific.  Billy Kay's a glamorous hustler and Dano's a naive dreamer trying to find himself amidst constant loss.  Costa's malaprop-prone, incestuous Kevin and Donnelly's jealous Brian make distinct impressions with little screen time, as does Masterson as the sullen Scott.

Brian Cox is the dominant force of "L.I.E.," though, a pedophile who lives in a garishly decorated home yet has an eye and ear for true beauty and a surprising capacity for tenderness.  It's a standout performance in a top notch ensemble and his character's fate should provoke mixed emotions.

"L.I.E." is like a suburban, humanistic "Kids" without the sensationalism.