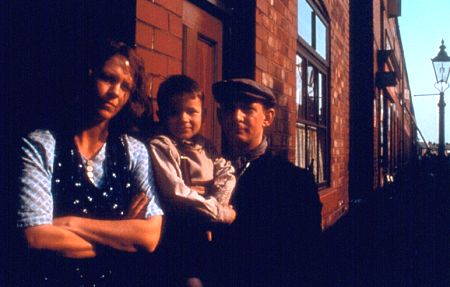 In 1930s Liverpool, seven year old Liam (Anthony Burrows) stutters under stress, a state he's in frequently at his Catholic school. His Dad's (Ian Hart, "The End of the Affair") proud to hold a job, but times are still tough Mam (Claire Hackett) is fiercely protective of her family and the potent love between her and her husband provides an aura of joy in dismal surroundings. The fragility of happiness is dealt a harsh blow, however, when Dad loses his job while maintaining his pride in director Stephen Frears' "Liam."

"Liam" is sure to suffer from its overwhelming likeness to "Angela's Ashes," the unsuccessful film adaption of the wildly successful Frank McCourt novel. While the Dad in this tale is not an alcoholic, his inability to swallow his pride in order to provide for his family has tragic consequences.

Dad would rather buy his former boss a beer he can ill afford, then hold out his hand for a work ticket with the others in his predicament. When his gesture is returned the next morning with a patronizing sneer and no work, Dad spits in the man's face. Mam sends daughter Teresa out to work for a wealthy Jewish family, admonishing her to refuse to clean the toilets (the first chore we witness her performing). Older brother Con (David Hart) works at the shipyards while Dad picks up cigarette butts and grows increasingly furious at the Catholic Church and the Jews whom he sees as bringing in cheap Irish labor to deny him of his rightful wage.

Liam faces a crisis of faith after accidentally seeing his mother naked and being too afraid to 'confess' his sin before his First Communion. His teacher Mrs. Abernathy (Anne Reid) brings in Father Ryan (Russell Dixon) to impress upon Liam and his classmates the ease with which they could damn themselves to hell, complete with graphic descriptions of hellfire and frightful metaphors for eternity. Teresa must face the guilt of preferring her kind employer, Mrs. Samuels (Jane Gurnett), to the mother who's growing increasingly pinched with the burdens placed upon her. To make matters worse, Teresa finds herself shielding the affair Mrs. Samuels is having, and, driven to the confessional, is told she can no longer work there.

Screenwriter Jimmy McGovern ("Priest") depicts a family being battered by the circumstances of its time and place, but even as he provides motivation for Dad's misplaced resentments, his transformation of the loving family man into a black-shirted Fascist is alarmingly abrupt. The fire bombing of the local Jewish pawnbroker's transports us out of Liverpool into Nazi Germany. For all its bleakness, "Angela's Ashes" often became quite funny during schoolroom catechism scenes while McGovern merely manages to elicit a smile or two. McGovern's horrifically ironic climax is too symbolic and coincidental, draining the scene of its intended emotional impact.

The cast is uniformly strong. Claire Hackett makes Mam more than just the strong survivor - she's a woman, too. Ian Hart shows how resentment can make a good man capable of horrible actions. Young Megan Burns conveys the conflict of liking a person but not their actions, while on the flip side, Jane Gurnett creates a privileged woman of kindness and understanding with an inexplicable weakness. The cherubic looking young Burrows is an adorable Liam, even if his stutter isn't entirely convincing. However, if it was the filmmakers' intent to have Liam act as our point of view, they don't succeed, as Liam's comprehension of events would be quite different than what's presented here.

"Liam" certainly isn't a chore to sit through, and it does have its moments, but its flaws and release behind a similar, higher profile work place it in the minor leagues.