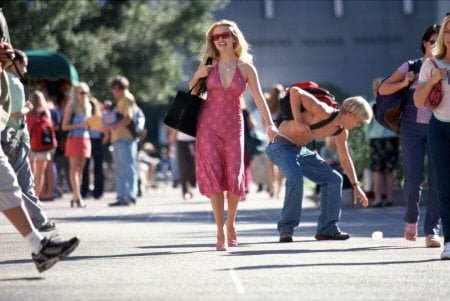 Elle Wood (Reese Witherspoon) is pretty, smart, popular and blonde. Her rich boyfriend, Warner (Matthew Davis), is heading off to Harvard Law School and he invites Elle to their favorite restaurant. But, instead of popping the question as she hoped, he unceremoniously dumps her. "I need a Jackie, not a Marilyn," he says, as he plans his future without her. You can't keep a good girl down, though, and Elle rises to the challenge and heads off to law school to win back her man in "Legally Blonde."

Elle Wood (Reese Witherspoon, "Election") is blonde, beautiful and about to graduate from her junior fashion retailing college. She's also preparing to receive an heirloom engagement ring from her East Coast boyfriend Warner (Matthew Davis, "Pearl Harbor"). She's shaken to her core when she discovers that instead, he's breaking up with her, as she's just not 'serious' enough for a future senator. Elle's mettle is up, so she gets a Copolla to direct a video essay and gets accepted to Warner's school. Harvard Law has never seen the likes of Elle Wood, but they turn out to be a surprisingly compatible combination in "Legally Blonde."

"Legally Blonde" is essentially "Private Benjamin" goes to law school, with liberal dashes of "Clueless" thrown in. Although Reese Witherspoon has charm to spare, first time feature director Robert Luketic, armed with an adapted screenplay by Karen McCullah Lutz and Kirsten Smith ("10 Things I Hate About You"), serves up a film that lacks focus.

Elle, with her California couture, pink pumps and color-coordinated chihuahua Bruiser, is out to dispel the dumb blonde stereotype without toning down her wardrobe. But she receives a double shock her first day at school, which is a lot tougher than she had expected (surrounded by black lap tops, Elle brings out a heart-shaped notepad and pink feather pen). She's ejected from her class by preppie Vivian Kensington (Selma Blair, "Cruel Intentions") and then discovers that Vivian's wearing Warner's family rock. An emergency manicure at the Beauty Oasis, where she meets pathetic Paulette (Jennifer Coolidge, "Best in Show"), gives her a boost, though, and she decides to stick it out.

The young fitness wife of a wealthy older man accused of murdering him turns out to be an alumnus of Elle's California college. The creaky plot mechanics don't hold a lot of laughs and take the focus away from Elle's plan to win back Warner. The romantic possibilities of pairing Elle and Emmett aren't explored and Vivian's scheme to show up Elle at a party is a visual joke done months ago in "Bridget Jones's Diary."

Still, Reese Witherspoon shines as the perky, pampered blonde, injecting the film with so much good will it's hard to dislike it. Moonie the chihuahua is a great find as Bruiser, a natural extension of Elle Woods' persona. No one else in the cast, with the exception of Brooke Taylor as tough as nails Professor Stromwell and Oz Perkins as Dorky David, really offers much. Raquel Welch has a flamboyant cameo as the murder victim's first wife.

Production design by Melissa Stewart ("To Die For") and costume design by Sophie de Rakoff Carbonell ("Crime + Punishment in Suburbia") mix elements of "Clueless" with those of "The Paper Chase."

Newcomer Robert Luketic makes his feature film debut and has the good fortune to hook up with the talented Reese Witherspoon. Overall, "Legally Blonde" is a lost opportunity that uses cliche instead of originality to make its point that just because someone is a blonde, it doesn't necessarily mean they are dumb. Fortunately, Witherspoon is a talented young actress who has strong comedic ability and is able to carry the film herself. This is a good thing as the script by Karen McCullah Lutz and Kirsten Smith doesn't get beyond the two-dimensional.

>From the very start of the flick, we are presented with a character, Elle, who is by no means a dumb bunny. When Warner dumps her because she's not smart enough, I began to have a problem with the story. How could this guy spend so much time with Elle and not see that she is not just a pretty face? When she gains admission, at the last minute, to Harvard Law School, it should be apparent, to all, that Elle is not just smart, she is very smart. But, if the characters in the film were as observant as we are, they would realize that Elle is special and there wouldn't be a movie here. So, we have to wait until they all come to their senses and see Elle for what she really is.

The burden of carrying "Legally Blonde" falls upon the shoulders of Reese Witherspoon and, with confidence and capability, she pulls it off. There is little beneath the surface of the story as we watch Elle prove herself smart time and time again. She is not just pretty and soon proves herself equal to any intellectual task presented her.. She is, of course, selected by one of her professors (Victor Garber) to be a law clerk on a high profile murder case. Her ex-boyfriend, Warner, and his new, serious (i.e. not blonde) girlfriend Vivian (Selma Blair) are also part of the team and Elle has to prove, repeatedly, that her blonde roots have not dumbed her down. Eventually, everyone gets the point.

There is little going on with the supporting cast, mainly due to the shallow script that develops no one besides Elle. Luke Wilson is an obvious romantic interest, but that whole development is left as a footnote at the end of the film. Selma Blair, who made such a funny, charming splash in "Cruel Intentions," is left out in the cold as non-blonde Vivian. Matthew Davis is clueless as Warner and it makes one wonder just what Elle would see in such a narrow-minded and not that bright a guy. The rest of the cast members are more symbolic than real.

Overall, production values are on the cheap side and, like the screenplay, shallow. Photography, by Anthony B. Richmond, looks murky and, except for some nice shots of Boston and Cambridge, is not notable. Kudos to Sophie de Rakoff Carbonell for her costuming of Witherspoon and her pet Chihuahua, Bruiser.

There is more than just a passing similarity to the comedy hit, "Clueless," as Elle goes about improving the quality of life for those around her, including making a dorky law student a babe magnet. We've been here before and seen it done better. But, Witherspoon holds her own and makes "Legally Blonde" watchable, at least.