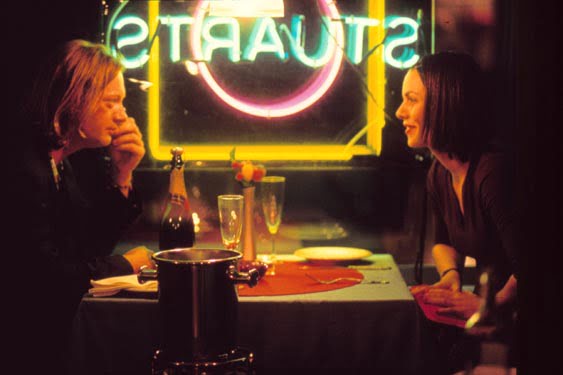 When the middle-aged restaurant owner of an English seaside village drowns, three men at his funeral begin to examine life and love. Dan (Bill Nighy, "Still Crazy"), Stuart's very married brother-in-law, meets a French woman he begins to obsess over. Nick (Tom Hollander, "Possession," bearing a strong resemblance to the young Peter McNichol), Stuart's younger lover, is amazed to find himself drawn to a woman in his grief. Tim (Douglas Henshall, "Angels & Insects"), a family cousin returning home for the first time in 8 years, sets his sights on a woman who has a startling secret. Each is about to discover he possesses a "Lawless Heart."

Writer/directors Neil Hunter and Tom Hunsinger ("Boyfriends") have crafted a circular triptych which changes audience perceptions of people, places and things depending on whose point of view we see them from. This warm and human film lets its audience settle in cozily with the denizens of a small English coastal village and watch their lives unfold. The experience is not unlike curling up with a sprawling novel.

The film begins three separate times as its three protagonists cross paths at Stuart's funeral reception. Dan is quite taken by the unusual conversation of local florist Corinne (Clementine Celarie, "Savage Nights") but panics at his attraction to her. He accepts a dinner invitation, only to be waylaid at the local pub by Nick, which is ironic given that Dan has been arguing with his wife Judy (Ellie Haddington, "Beautiful Creatures") about whether to give Stuart's money to Nick or keep it. He then ends up with another woman altogether who mistakes him for a cabbie. Corrine reenters the picture at Judy's birthday party in Stuart and Nick's restaurant in a scene that will resonate more deeply at the end of Tim's story.

Nick is alternately plagued by obnoxious house guest Tim and drunken party girl, Charlie (Sukie Smith, "Topsy Turvy"), who refuses to leave his house without tea and toast. When Nick runs into Charlie working as a cashier at the supermarket (where Dan also could not avoid Corrine), her simplicity charms him. Judy's good will is lost, however, when she believes her brother has been replaced too quickly by a woman.

Tim proves to be the biggest eye-opener, a disheveled charmer whose soft center was masked by Nick's aggravation. Tim is surprised to discover he wants to settle in the very place he's run from when he meets shop owner Leah (Josephine Baker), but she turns out to have a strong past connection to Tim's best buddy David (Stuart Laing) that muddles Tim's future.

"Lawless Heart" grows richer with each segment. Dan's story is a light tale of middle-aged angst from within a comfortable marriage. Nighy plays Dan as a hesitant hider who hems and haws with every woman except his wife and feels more comfortable with Nick when he 'starts playing for the home team.' Nick's bridging story is an unusually humorous treatment of grief which ends on a bittersweet note. Where Dan saw his wife as uncommonly altruistic through Nick's eyes we see an emotional bargainer. Tim's story is the most charged. He's the only one of the three not looking for love as a course of avoidance and our hearts break with his. Henshall's performance makes Tim all things to all people while always remaining true to his character. He's the best of a fine ensemble.

Hunter and Hunsinger's writing is clever, connecting stories with items as unlikely as a coconut and as mundane as the gift of a scarf, without ever seeming gimmicky. As directors they keep several balls in the air, juggling story strands without ever dropping one, ably assisted by the work of their editor Scott Thomas. Cinematographer Sean Bobbitt ("Wonderland") uses natural light for an unfussy look that calls attention to the people and their environment.