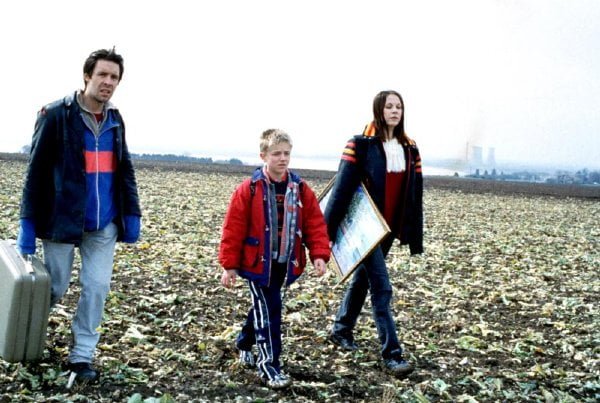 When Eastern European Tanya (Dina Korzun) leaves home with her 10-year-old son Artiom (Artiom Strelnikov) to meet her English fiance Mark, she instead finds herself a refugee with no money, no prospects and no passport in "Last Resort."

Artiom realizes that Mark is as neurotic as his mom and knows her hopes will be dashed before she does. Forced by circumstances to declare herself and her son refugees, Tanya and Artiom are trucked off to Stonehaven, a former honky tonk beachside amusement park, where refugees are housed in a cold, dismal, forbidding apartment building behind barbed wire fences policed by guard dogs. Without money, there's no escape - 12 to 16 months before being let out into English freedom, 4-6 months to be officially deported. The only money to be made is by selling goods, blood or yourself, if you happen to be an attractive young woman.

Tanya meets Alfie (Paddy Considine, "A Room for Romeo Brass"), the manager of the local arcade, in search for a phone card to attempt to reach Mark. Shaggy, hangdog Alfie, initially a suspicious character who appears to leech his living off the unfortunates of Stonehaven, changes our opinion of him in a nanosecond with the smile he flashes at Tanya. Once Tanya finally accepts the truth about Mark and sees the friendship that's developed between Artiom and Alfie, a tentative romance begins. However the self realization the whole humiliating experience has brought to Tanya means she won't allow herself to slip back into her old dependencies.

Polish writer/director Pawel Pawlikowski has created a small gem of a movie. His and cowriter Rowan Joffe's creative blending of an almost Kafkaesque political situation with both a gentle love story and a mother's journey to maturity is riveting storytelling. Visually, he and director of photography Ryszard Lenczewski combines jarringly close hand held camerawork with gorgeously framed, pastel character palletted landscapes. Original music by Max de Wardener adds melancholy with the ghost-like refrains of the shuttered amusement park.

Pawlikowski is also blessed with an outstanding, natural cast. Dina Korzun allows a gamut of emotion to play across her open, innocent face. She's resigned when she goes to pornographer Les (Lindsey Honey, the real life 'most famous pornographer in Britain'), then girlishly amused by the skit he pantomimes for her before ultimately breaking down with the shame of it when finally being broadcast over the internet. She works marvelously well with Considine,whose shaggy charm and reigned in hope make the viewer root for him. Considine makes the combination of a tough realist and a romantic work. Strelnikov is astonishingly confident in his screen debut as the ten year old street smart kid who adapts to a bad situation not of his making.

Thank goodness for the Shooting Gallery - while Hollywood continues to churn out very little of interest, they rescue great little films like "Last Resort" from obscurity.

Tanya (Dina Korzun) is a pretty Russian emigre who came to England with her 10-year old son, Artiom (Artiom Strelnikov) on the promise of marriage to a British citizen. She is shocked to learn that her would be fiance has stranded her and the boy and a happy life in London is nothing but a vanished dream. She and Artiom find themselves stuck in a desolate holding center for refugees with no passport, no money and no rights in "Last Resort."

Documentary filmmaker Pawel Pawlikowski makes his first inroad into feature length fiction with a tale (co-written by Rowan Joffe) about a naive young mother who digs up her Moscow roots with the hope of planting them in prosperous London. Tanya's plans are dashed at the outset, when stranded by the unseen fiance, and she and Artiom are left in the hands of the immigration authorities. She seeks asylum in England, not knowing it means internment in the rundown, former resort town of Stonehaven - for 12 to 16 months!

Alfie (Paddy Considine), an ex-con who runs the local video arcade, takes a liking to Tanya and Artiom and helps them out with food, a TV and friendship. He even fixes up their dreary flat with a lick of paint here and there. But, it is obvious to Alfie that the penniless woman is desperate to break out of her prison and escape her humiliation. When Tanya agrees to take a job with a cyberspace pornographer named Les (Britain's most famous real life porno king, Lindsay Honey), Alfie realizes this as a frantic cry for help. He makes it his mission to help Tanya and Artiom escape, even as he falls in love with the pretty Russian.

"Last Resort" is a little gem of a movie that captures a world not known to most - a refugee-inhabited land without hope of escape from its daily, desolate grind. But, this setting is a backdrop for the real tale about Tanya and Artiom and the misguided naivete that lands them in the bleak gray hell of Stonehaven. When Alfie comes into their life, things change for the better, but a prison is still a prison and escape is her only hope.

Dina Korzun, who looks like a Slavic Emily Watson, is perfect as Tanya. She is protective of her son, but is at the mercy of the authorities that interned her. Her one failed escape attempt is met with the threat of real incarceration, driving Tanya to even deeper frustration. Korzun gives a subtle performance as she realizes that her choices have put her and Artiom in such dire straits. Complementing Korzun is a truly likable performance by Paddy Considine as Alfie. The affection he feels for Tanya and Artiom is palpable and naturally rendered. Young Artiom Strelnikov makes an impressive debut as the savvy son with his own share of problems coping with the situation.

Helmer Pawlikowski, using a combination of static and hand held camera (by lenser Ryszard Lenczewski), creates a vision that is both cold and intimate. The backdrop of Stonehaven depicts a bleak, unforgiving world where security surveillance camera monitor every corner of the confined world, making escape near impossible. This changes when the film concentrates on the three principles and takes on a warmth that reflects the trio's respective feelings and mood. All in all, "Last Resort" is a little treat of a quality film at a time when Hollywood is releasing mostly dreck.