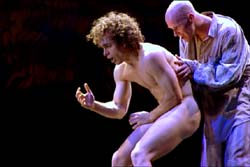 Legendary author-illustrator Maurice Sendak created a vision of the brutality of Hitler's Holocaust as it affected all of the children who suffered at the hands of the Nazis. He agreed to take his work into collaboration with the avant-garde Pilobolus Dance Theater. The result is a documentary work that weaves a tapestry encompassing rehearsals, interviews, rare Holocaust footage and, finally, the performance of the dance-theater piece, A Selection, in director Mirra Bank's "Last Dance."

Author/illustrator Maurice Sendak ("Where the Wild Things Are") and his partner Arthur Yorinks are the artistic directors of their own theatrical company, The Night Kitchen. Pilobolus is an experimental dance company comprised of 3 artistic directors - Michael Tracy, Jonathan Walker and Robby Barnett - and 6 dancers - Rebecca Anderson, Otis Cook, Josie Coyoc, Matt Kent, Gaspard Louis and Benjamin Pring - who develop their works as a collaborative authorship. When Sendak, a Jew haunted by the loss of much of his family in the Holocaust, wanted to revive Brundibar, a children's' opera written by Hans Krasa in the Terezin concentration camp, a collaboration was formed with Pilobolus. Words and visuals on one side clash with expressionistic movement on the other, but the resultant 'A Selection' is harmony itself in director Mirra Banks' "Last Dance."

Banks stayed with her subjects for a year, with DP Vic Losick shooting 125 hours of digital beta video. Her experience has been transformed into an 83 minute document of a project which started in a muddle, seesawed back and forth between controlling interests multiple times, then found its sweet spot. "Last Dance" is a fascinating look a creative process that overcame several obstacles.

All parties begin with good intentions and polite attempts to compromise and understand. Initially, watching the Kitchen duo with Pilobolus is like watching a left-brained individual trying to communicate with a right brainer. Pilobolus's directors describe their dancers as a jazz group. Improvisation and impressionism are their bywords. 'They're not used to being talked to by a graphic artist' says one. Sendak, who clearly has a specific story he wishes to tell, gets frustrated by the touchy feely nature of the dance company. (Banks edits in archival Holocaust footage of Terezin, focusing on the children, as accompaniment to Sendak's tortured recollections, giving her audience more background on Sendak's viewpoint.) When Sendak demands that a dancer separate the group into those who will live and those who will die, he's told that it's just too obvious. 'But it's what this is *about*' the author retorts.

Meanwhile, we watch the dancers contort themselves into seemingly impossible visual expressions. One, Otis Cook, grabs on to what Sendak is aiming for and emerges as the central character of the piece. Slowly (we can only imagine how repetitive this process must be, as Banks is very efficient in building her story) we see 'A Selection' evolve from ideas and confusion into the fully developed Holocaust dance performed before audiences around the world.

"Last Dance" expands and constricts like the dancers that populate it. Banks' work has a life of its own.

As you watch "Last Dance" unfold it becomes quickly clear that this is a stormy collaboration that, at first, seems destined to fail. Sendak provides the core material that will be the basis, hopefully for all the players, of a dynamic, intense dance piece that will translate the author's confrontation with the Holocaust to the stage. As the alliance between Sendak and the directors of Pilobolus (Robert Barnett, Michael Tracy and Jonathan Wolken) develops, the conflicts over the author's vision mount.

Sendak created a unique look at the Holocaust, punctuated in the film with rare archival footage revolving almost completely around the children that suffered at Hitler's blood drenched hands. Documaker Bank includes Nazi propaganda film of seemingly happy children playing and singing at the concentration camp at Theresienstadt, with Sendak narrating over the footage to tell us that, after the propagandists got their film, the children were shipped off to such death camps as Auswitcz for immediate extermination. The innocent faces of the kids and their fate is one of the most gut-wrenching aspects of the "Last Dance."

This incredibly moving archival footage paves the way for the collaboration that will give life to the author's words and ideas. But, for all involved, it is a rocky road as the author vies to have his narrative of the story kept intact while the Pilobolus creators maintain that a starkly visual rendition is best. It is a gloves off confrontation between Sendak and, primarily, Pilobolus's Robby Barnett as they battle over their artistic differences. Throughout the course of this conflict, the members of the dance company work hard to bring life and movement to the author's words while Bank elicits intriguing interviews from Sendak and the rest.

The culmination of the fights, pleas, pain and rehearsal is the staging of A Selection, which takes all of the seemingly disjointed bits and pieces that were presented in the first hour and creates a moving, fluid interpretation of Sendak's vision. The remarkable thing about "Last Dance" is how the creative process, at all levels, moves from disjointed conflict into a professional, though-provoking dance that captures the essence of the horror of the Holocaust.

The run time of "Last Dance," at 83 minutes, feels padded with the seemingly endless rehearsals, as the experimentation, success and failure of the dancers takes us through the nuts and bolts of their creative processes. This, with the arguments and compromises that are made, is interesting, but after an hour of it, I wanted to see what it all comes down to on stage. This, with the Holocaust footage, is where the film excels. The culmination of everyone's efforts is given life when A Selection appears in its final form. (The title, I must note, stems from when the Holocaust inmates enter the death camps and their lives are forfeit or temporarily spared by the Nazi selection of life and death.)

A dance documentary about the Holocaust isn't something that will attract most people, but if either or both of these peak your interest then "Last Dance" may be right up your alley.