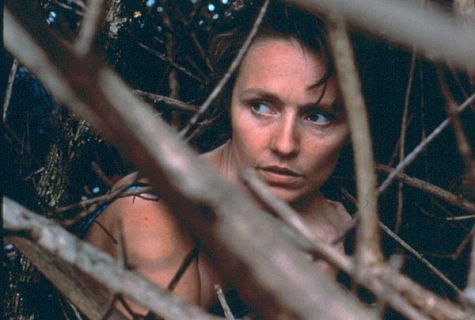 Detective Leon Zat (Anthony Lapaglia, "The House of Mirth"), distanced from his wife Sonja (Kerry Armstrong), has drifted into an affair with recently separated Jane (Rachel Blake) much to the disapproval of his single partner Claudia (Leah Purcell). Sonja's trying to make sense of her marriage with Dr. Valerie Somers (Barbara Hershey, "Portrait of a Lady"), a psychiatrist drowning in grief after the death of her only child. Patrick (Peter Phelps) tells Dr. Somers of his affair with a married man, who she begins to suspect is her husband (Geoffrey Rush, "Shakespeare in Love"). When Dr. Somers is reported missing, Leon's investigation crosses over lives as entangled as the tropical shrubs known as "Lantana."

Leon Zat's mid-life crisis is the jumping off point for an examination of four different marriages, each in a different stage and each facing a different stumbling block. Director Ray Lawrence, returning to film for the first time since 1986's "Bliss," saw a movie in Andrew Bovell's 1996 stage play, and together with producer Jan Chapman, the three developed the material together.

An overwhelming cacophony of insects is heard as we're made privy to the dead body of a women entangled in lantana. We see a wedding ring, but not her face. As Leon's missing person investigation will connect many disparate characters, we go into flashback, the beginning of an ordinary day for the Sydney policeman.

The one night stand Leon's had with Jane has him feeling guilty and her thinking she's beginning an affair. Leon's distance sends Sonja to Valerie, who'll run into Jane's ex Pete on the street before he strikes up a barroom conversation with Leon. Nik and Paula are young and lusty, but struggling to get by with only her nurse's paycheck to support them and their three kids. Jane's nosy intrusion into their lives will bring Leon back to her doorstep.

Four couples each face a different problem - midlife crisis, the death of an only child, separation and unemployment. All are explored as a mystery connects each one of them to that dead body the film's credits rolled over.

Lawrence and editor Karl Sodersten keep the strands clear and connected (I only noticed one small glitch involving Pete). Cinematographer Mandy Walker captures the actors and various outlying areas around Sydney with natural light, setting a distinct tone for the film. She keeps the different geographical locations, ranging from an inner city alley to a remote wooded area, feeling as connected as the disparate characters that inhabit them.

Director Lawrence also gets finely nuanced performances from a cast portraying a wide cross section of society. Lapaglia remains front and center and grounds the film with his best performance in years as his initial inability to feel slowly dissolves. Hershey's descent into despair is palpable, as her professional way of coping with her daughter's death (she wrote a book about the experience) doesn't jibe with the personal. Oscar winner Geoffrey Rush, strangely, is the weakest link of the ensemble, presenting too much of a blank slate. Rachel Blake is almost playful as the adventurous Jane while Kerry Armstrong, although still sexy, is a more mature, responsible woman as Sonja. Leah Purcell, in her first feature role, adds in a small role as Leon's partner Claudia and also enjoys the most charming and unexpected cross-connection.

This well constructed film will keep you guessing until the end, and even then delivers a surprising secret.