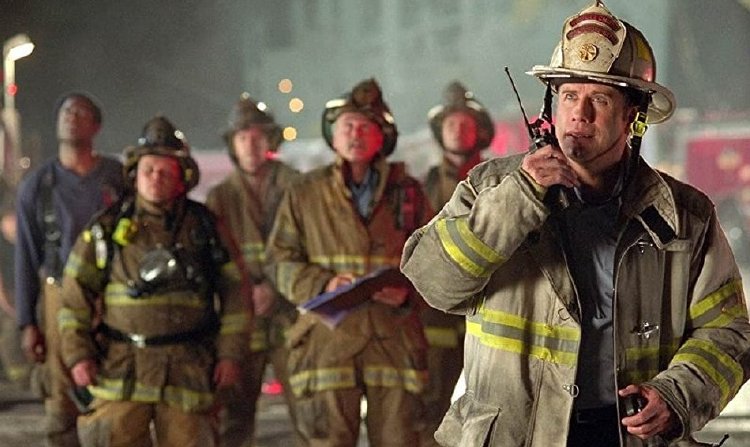 Chief Michael Kennedy (John Travolta) is a third generation Baltimore fireman who personally accompanies new rookie Jack Morrison (Joaquin Phoenix, "The Village") into his first burning building. Years later, when Jack, a 'pipe man,' tells Mike he wants to transfer to the more dangerous job of 'truck man,' Kennedy cautions him, but Jack has a talent for saving lives on
"Ladder 49."

This post-9/11 paean to those who risk their lives is obviously heart felt, but its ponderously by-the-numbers execution results in a film that is emotionally unengaging. Director Jay Russell ("Tuck Everlasting") elicits mostly pedestrian performances from his ensemble cast and taints good action scenes with overt dramatic rigging.

An old industrial building is ablaze and several firefighters are inside, trying to locate two men who are not accounted for. Jack finds the second man and persuades him to lower himself on a rope to a waiting rescue bucket poised outside, but an explosion sends Jack plummeting several floors to an unknown location. Severely injured, Jack maintains radio communication with his old friend, Chief Kennedy, who is coordinating his rescue outside.

Writer Lewis Colick ("Domestic Disturbance") uses Jack's suspenseful rescue attempt as a girder from which to string flashbacks of Jack's career from his first day as an Engine 33 rookie back up to his current predicament, but except for some humorous firehouse mischief and a few well done blaze battles these scenes play out like the Kodak moments in the life of a fireman. Jack's career highs and lows are interspersed with him shyly meeting his wife, getting married and having kids whom his entire coterie fetes at backyard birthday parties. Linda Morrison (Jacinda Barrett, "The Human stain") bonds with the boys at their Irish bar then settles down with cliched wifely worries about the danger of Jack's job. There are several strong scenes. Jack's first fire leading the charge with the hose is interrupted by a stream of rats fleeing the building's upper floors and the insidious nature of fire is well realized. The later saving of a young girl on Christmas Eve gets to the heart of the holiday and the loss of a young fireman in an abandoned, condemned building weighs more heavily for the senselessness of his sacrifice. Yet Russell undercuts a climatic rescue by placing two assisting firemen behind an office window Jack's just valiantly broken through on his own. In more intimate scenes, few of the firefighters stand out from the crowd and Jack and Linda lack chemistry.

Phoenix isn't bad in the role of Jack, proffering a quiet, regular kind of guy, but he never gets us to care about him enough either. The episodic nature of the script doesn't allow any of the actors to really achieve any kind of arc. Travolta projects the right kind of charismatic leadership but fails to disappear into the role, lending some of his scenes a stilted edge. Of the entire cast, which also includes Kevin Chapman ("Mystic River"), Morris Chestnut ("Breakin' All the Rules"), Balthazar Getty ("Deuces Wild") and Jay Hernandez ("Torque"), only Robert Patrick ("Terminator 2") presents a character, Lenny Richter, who has any real depth and human shading. Patrick's Lenny has the right level of humor and camaraderie to portray one of Engine 33's two hazing roles, but he invests the character with the slightest trace of nastiness, giving him a lone wolf quality that instead of repelling the others, make them want to draw him in. A bonding moment with Lenny is a well earned one.

Production design celebrates the blue collar neighborhoods of Baltimore. Art direction and set decorators nail the firehouse environs as well as the abodes of its working class. Early scoring (William Ross, "Tuck Everlasting") has underlying harpsichord, giving it a effective retro 60's feel, but quickly falls into the cliche of Irish tinwhistle.

"Ladder 49" ends on an unexpected note, but its over reliance on images too freshly familiar and frequent from September of 2001 disconnect the viewer from its more everyday heroism. Russell's use of a fire truck to juxtapose two of life's most momentous events is an effective piece of filmmaking almost lost in the ceremony.

It’s just another day in the lives of the firefighters of Engine House 33 as Jack Morrison (Joachim Phoenix) and his comrades rush into the upper floors of a blazing 20 story building to save three trapped people. They get two out and Jack is saving the third when disaster strikes and the floor caves in beneath him. Trapped, injured and dazed he flashes back to his first days as a rookie firefighter assigned to “Ladder 49.”

There are not a lot of surprises to “Ladder 49” but it is a good, old-fashioned humanist/action movie that focuses on the true heroes of the community. The unfortunate events of 9/11 helped us regain the due respect that firefighters have earned since Benjamin Franklin established the first volunteer fire department in Philadelphia back in 1735. Director Jay Russell, with the original screenplay by Lewis Colick, wears his heart on his sleeve with the heartfelt story of the life of one such fireman.

As Jack’s life unfolds before us, we meet the newly graduated firefighter as he walks into his first job at Baltimore City Fire Department’s Engine House 33. He is sent into the office of Captain Mike Kennedy (John Travolta) where he finds his new boss in a drunken haze. Then, he is told that the department’s priest is making his annual visit to hear confessions and, of course, as a good catholic Jack is expected to attend. When the shadowy cleric starts asking some very personal questions, Jack realizes he has been had and he has undergone his first ritual of becoming a member of the brotherhood. The life and times of Jack Morrison is the center of “Ladder 49.”

The story switches at appropriate times and stages in Jack’s life on Ladder 49 from his current harrowing dilemma to the events and landmarks that made up his being to that moment. He bonds with the others in the firehouse, an eclectic collection of amiable characters that are too broadly drawn but benefit from the efforts of the actors filling the roles. Soon, Jack meets and falls for pretty Linda (Jacinda Barrett) and the cycle of life unfolds - love, marriage, birth, danger, tragedy and death are all part of the fabric of the firefighter’s existence.

Joachim Phoenix is proving to be a talented and capable actor that has good range of character. As Jack Morrison he is a good-natured, likable everyman who loves his job, his wife, friends and family. The script affords his character to develop into a real person, giving his life-threatening plight in the burning building a real resonance. As Jack’s fate unfolds, you are both hopeful and fearful for the man in his hour of need.

The supporting cast doesn’t get the chance to fully develop their characters, unfortunately, but the actors give their under drawn roles their best shot. John Travolta, the name attraction for “Ladder 49,” keeps a step back and smartly gives the limelight to Phoenix. He is amusing and thoughtful as Jack’s boss and good friend and injects humor as a captain who is willing to take part in station shenanigans. Jacinda Barrett gives a yeoman’s performance as Jack’s girlfriend and wife, Linda. Hers is the kind of role that is usually thanklessly clichéd but the actress and the script make it better than the norm.

Of the firehouse minion, Robert Patrick comes across best as Lenny Richter, putting dimension into his role as a tough, pragmatic senior firefighter who accepts the dangers and losses of his chosen profession. Morris Chestnut, Kevin Daniels, Kevin Chapman, Balthazar Getty, Billy Burke, Tim Guinee, and an underutilized Jay Hernandez make up the rest of the Engine 33 team. The actors are put through their paces and little more as they fill in the background of Jack’s life.

Techs are traditional and solidly crafted. James L. Carter’s photography gives both the day-to-day life of a fireman and the fast-paced tension of fighting a fire (through the eyes of the fighter) a distinct look, cool and hot. Makeup neglects to show the changes the years bring upon the characters as the story spans a decade. A little graying at Mike Kennedy’s temples is the only clue that time marches on. Production design, particularly the mindless rampage of fire, does a good job in conveying the danger and confusion that a conflagration brings in its wake.

I heard mutterings of, “Well, it isn’t ‘Backdraft,’” as I left the screening of “Ladder 49.” My response is, yeah, it isn’t “Backdraft.” Nor is it meant to be. That Ron Howard film built up the inferno into a living, breathing being with malicious, hateful intent. Jay Russell and company tell a much more thoughtful story that expresses the deserved good feelings we have for the best of the best.