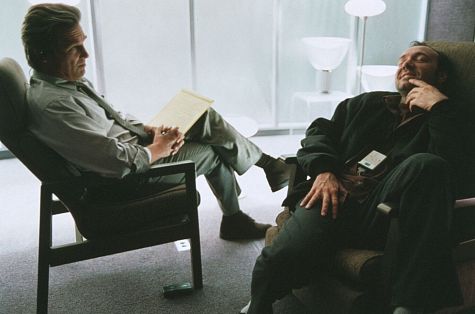 Prot (Kevin Spacey) claims to be a visitor from another world who lands on earth as an envoy from beyond the stars and Jeff Bridges is the psychiatrist assigned to determine if the man is really an extraterrestrial or just another earth-born loony in "K-PAX."

Dr. Mark Powell (Jeff Bridges, "The Contender") is juggling a large caseload at a Manhattan psychiatric hospital when he's introduced to new patient Prot (Kevin Spacey, "Pay It Forward"). Prot, who devours fruit and wears dark sunglasses due to light sensitivity, captures the doctor's interest with his inhuman response to drugs, his rational intelligence, and his claim to be from a planet 1,000 light years away - "K-PAX."

Director Iain Softley ("The Wings of the Dove") takes two of America's finest actors and guides them through this amalgamation of "Awakenings" and "One Flew Over the Cuckoo's Nest" with top notch technical competence. The story however, adapted by screenwriter Charles Leavitt ("The Mighty") from the novel by Gene Brewer, pulls a few fast ones in the fantastical fluff vein, in order to have its cake and eat it too.

Prot becomes very popular with the members of his ward, all quirky characters with non harmful, endearing problems. He upsets Mark by counselling them, but of course his methods work. He astounds Mark (and a panel of astronomy experts) with his knowledge of distant solar systems. His claim of returning to K-PAX on July 27, plus an ultimatum from hospital chief Dr. Villars (Alfre Woodard), inspires Dr. Powell to invite Prot to his home for July 4, hoping that family interaction may provide a breakthrough. It does, and after a series of increasingly stressful hypnotic regression sessions, Dr. Powell is finally able to attach Prot to an earthbound tragedy. Meanwhile, the ward residents write essays in order to win the prized spot of accompanying Prot back to K-PAX.

Jeff Bridges is fine as Mark Powell, a man so devoted to his patients he takes his family for granted. Spacey gives himself an odd appearance by loping about on the balls of his feet and eating bananas unpeeled. He should beware of typecasting, however, this being his second 'saintly damaged' persona (the other being Eugene Simonet of "Pay It Forward") he's played since winning his Best Actor Oscar for "American Beauty" (where he was also damaged, and certainly otherworldly!). Mary McCormack ("Private Parts") is supportive in the wife role (again). David Patrick Kelly ("The Crow") does a Michael Jeter turn as patient Howie. Saul Williams ("Slam") is Ernie, a patient with a phobia of air contaminants who always wears a surgical mask and latex gloves, almost normal behavior in these times.

While "K-PAX" does a fair job of tying up psychological loose ends, providing explanations for Prot's more pedestrian K-Paxian cultural traits, it's weak on working in logic for the fantastic ones. "K-PAX" never leaves the stratosphere.

A wheelchair-bound beggar sees, in dazzling white light, a man standing alone in a busy train station. When a woman is mugged and the mystery man tries to help, he is taken into custody by the police when he declares that he is from another planet. He is sent, eventually, to the Psychiatric Institute of Manhattan under the care of overworked shrink Dr. Mark Powell (Bridges). The strange visitor, named Prot (rhymes with dote), tells the doc about the perfect life on his home planet, K-PAX, a thousand light years away where there is no family, no laws and, proving the K-PAXians superior beings, no lawyers.

As Dr. Powell tries to unravel the delusional psychosis that he knows Prot suffers from, he has his logic questioned when his patient gives him exact celestial information about the K-PAX solar system. The doctor takes the information to a good friend, Dr. Steve Becker (Brian Howe), an astronomer, who devises a series of astronomical questions to ask Prot. The answers stun the experts in their accuracy and plant the seeds of doubt about his patient in Powell's mind. Prot continues to exhibit other worldly signs as his presence in the hospital introduces a therapeutic affect on the other patients. He also, convincingly, talks to the doctor's dog and shows a penchant for earthly produce - he loves to eat bananas, skin and all.

"K-PAX," despite its mysterious lead character, Prot, is, at its heart, a pedestrian drama that is derivative of a combination of films. There are obvious ties to "Starman" (starring, coincidentally, Jeff Bridges as the visitor from another planet) for the space alien perspective and films like "Awakenings" and "One Flew Over the Cuckoo's Nest" for the psychiatric institution viewpoint. As such, the script by Charles Leavitt (from the Gene Brewer novel) has a familiar feel that doesn't break new ground. The stranger-in-a-strange-land story uses clichéd concepts with Prot a mysterious savant who influences those around him. The amiable inmates of the institute are mostly cute, harmless little folk who just need someone to show them the way out of their psychosis - akin to Randal Patrick McMurphy in "Cuckoo's Nest." There is also a formulaic race against the clock as Dr. Powell is convinced that Prot's declared day of departure from earth, only weeks away, marks the limited time the doctor has to save his patient from himself.

Acting doesn't break any new ground, either. Oscar-winner Kevin Spacey gives a studied and mannered performance as Prot. He depicts the supposed alien being (or, delusional patient) with the cock of his head and a trotting shuffle walk that is to convey his extraterrestrial origins. Prot, though, is more of a symbol than a character and Spacey keeps us at arm's length, albeit amusingly so. Jeff Bridges does yeoman's work as the dedicated psychiatrist who is torn between believing that Prot is really an alien being and knowing that he is human, although a very special human. Bridges is, actually, the focus of the story as he uses his psychiatric skills as the basis of his gumshoe work to discover his ward's real identity. The actor puts a nice arc on his perf.

The rest of the cast supporting "K-PAK's" two stars are not permitted to flesh out their various characters. Alfre Woodard is wasted as the pic's authority figure, Institute boss Claudia Villars, casting bureaucratic doubts on Powell's endeavor to delve into Prot's mind. Mary McCormack has the tough job as the Powell's supportive, loyal wife, Rachel. The actress is able to put a believable spin on her role as the doc's second wife who worries over the effect Prot has on her husband. The ensemble that forms the clinic's patient pool a collection of harmless souls including David Patrick Kelly as myopic Howie who Prot assigns three tasks that will cure him, Saul Williams as germ-fearing Ernie who is the recipient of one of Howie's tasks, and Celia Weston as the elegant, reclusive Mrs. Archer - all of whom beg Prot to take them with him when he heads home.

Helmer Softley utilizes a collection of veteran technicians to convey his simple story. John Mathieson uses concentrations of light - Prot supposedly arrived on earth via a light beam - to pointedly accent many scenes. Production design, by John Beard, mixes the drabness of the institution with other unusual set locales like the New York Museum of Natural History's Rose Center for Earth and Space. Other techs fit the bill.

I had hopes for "K-PAX" but was disappointed by the routine story that breaks no ground and derives from other, better works.