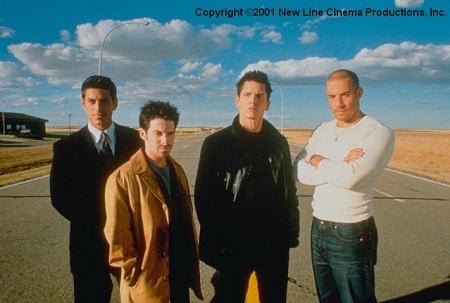 Matty Demaret's (Barry Pepper, "Battlefield Earth") never become a man in his father's eyes ever since dad's right-hand-man Teddy Deserve (John Malkovich) tried and failed to coach him through his first hit as a preteen. So, while Matty's never followed in dad's footsteps, he can't score a job as a sports agent either.  Being the son of Benny 'Chains' (Dennis Hopper) has its drawbacks.  Matty, with Teddy's help, convinces dad to allow him to handle a big money pickup, but is put in a pickle when his childhood buddy Johnny Marbles (Seth Green, "Austin Powers") loses the bag at a rural midwestern airport in "Knockaround Guys."

Matty gathers cousin and ladies man Chris (Andrew Davoli, "The Yards") and hulking tough guy buddy Taylor (Vin Diesel, "Boiler Room") and make their way to Wibaux. They formulate a plan to intimidate the town's toughest guy and get him to nose out who has their money. Taylor quickly accomplishes part one and they begin to tail two stoners who've been lavishly appeasing their munchy attacks, but just as they're about to nail the potheads, they discover that the town's Sheriff (Tom Noonan, "The Pledge") is a) one step ahead of them and b) is corrupt. Matty must face dad's wrath, his friends' apparent disloyalty and the humiliation of being bailed out by Teddy.

Writers Brian Koppelman and David Levien ("Rounders") also make their directorial debut with "Knockaround Guys." They should have worked on sharpening their script writing skills first. "Knockaround Guys" starts with an unexpected jolt (it's disarming to see a pudgy kid handed a pistol to take out the guy who taught him how to ride a bike) and eases into what seems like a black coming-of-age comedy, but the film never finds its tone becoming all too serious as it reaches its climax. The lack of humor pervading the final reels lays bare the unoriginal workings of a plot that could have been camouflaged, or at least forgiven, taken less seriously. Were these guys responsible for Malkovich's marvelously skewed lines ('I could beat his ass carrying a lawn chair in my left hand.')? The rest of the script, unfairly or not, implies Malkovich was improvising.

Cinematographer Tom Richmond ("Waking the Dead") fails to give the film a fresh look and, while one wouldn't expect much flash from a town like Wibaux, the interiors are so uniformly drab the entire film looks bland and murky.

There is pleasure to be found in some of the performances. Barry Pepper is a plus as the conflicted Matty, a capable guy let down by the placement of his allegiances. Vin Diesel has yet to disappoint, and his tank shirted muscleman with a grinding-gears voice is no exception. John Malkovich, too over the top in "Rounders," nails his mafioso here. He throws us off kilter with his wacked (or is that whacked?) line readings and can be reassuring to Matty one moment and ruthless the next. Dennis Hopper never bears any resemblance to a feared mob boss, however, and even the usually creepy Tom Noonan seems uninspired here.

"Knockaround Guys" (a euphemism for the mob) leaves an interesting cast rattling around an empty structure.