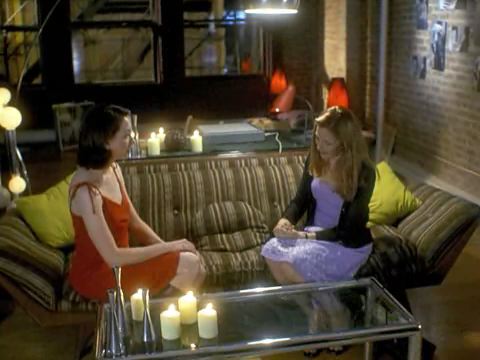 Neurotic New Yorker Jessica Stein (Jennifer Westfeldt) is a troubled single surrounded by committed relationships.  When an ad-fueled dating spree only makes her situation bleaker, Jessica throws caution aside and responds to an intriguing “women seeking women” personal.  While she connects with Helen Cooper (Heather Juergensen), her emotions are in upheaval when Helen wants to become the next in line to be “Kissing Jessica Stein.”

‘Would you shut up? I’m atoning,’ Jessica informs mom (Tovah Feldshuh, “Happy Accidents”) at synagogue.  Jessica’s sandwiched between a mother who’s pointing out eligibles and a grandmother who’s appraising their sex appeal as this delightful romantic comedy begins.  Formed from a skit developed on a New York stage, “Kissing Jessica Stein” may garner the type of attention for its costars and authors that Matt Damon and Ben Affleck received a few years ago.

The costarring screenwriters not only have an ear for dialogue, they work their affinity for language into their plot.  Jessica is drawn to Helen’s ad by a Rilke quote and is further delighted by Helen’s use of the word marinate outside of a cooking context.  Jessica makes her living weaving words together as a journalist (although she’s really a frustrated painter) and her biggest romance to date was with her current boss Josh (Scott Cohen, “Private Parts”), her older brother’s college roommate and an aspiring but blocked writer.  Visual puns are made of old sayings (Jessica’s abandoned on the sidewalk wearing a bridesmaid dress she’s being fitted for) and song lyrics make a point via a well-timed record skip.

Westfeldt and Juergensen use the tried and true concepts of the hellish dating montage and matchmaking Jewish mother, but throw some curveballs into the mix to keep things interesting.  While Jessica’s amazed to learn that lesbians use accessories in their sex lives, she never discovers that Helen is giving the same sex a try for the first time as well.  Helen’s gay friends Martin (Michael Mastro, “The Night We Never Met”) and Sebastian (Carson Elrod) are at odds over her new sexual direction.  Jessica’s mom possesses far deeper insights than her stereotype would suggest.

Jennifer Westfeldt’s Jessica is uptight and neurotic, a female Alvy Singer with Annie Hall’s vocal inflections.  She’s almost annoying, but Westfeldt plays it well against her costars’ exasperation.  Juergensen, who resembles Ileanna Douglas, makes Helen a committed risk taker who confidently navigates Manhattan’s art gallery scene.  She’s slightly Bohemian, but can blend in with the bourgeois.  Scott Cohen does a nice job transitioning Josh from aggravated former lover to confused and hopeful yearner.  Feldshuh steals every scene she’s in.  Mrs. Stein is a hilarious manipulator, but also a warm and supportive parent.  This is an early contender for Best Supporting Actress recognition.  Also entertaining, albeit in a more broadly comedic vein, is Jackie Hoffman (“Mo Money”) as Jessica’s best office friend Joan.

Director Charles Herman-Wurmfeld makes a strong debut, delivering a very polished looking and sprightly paced film.  “Kissing Jessica Stein” is the type of indie that could connect with audiences and become a mainstream hit.