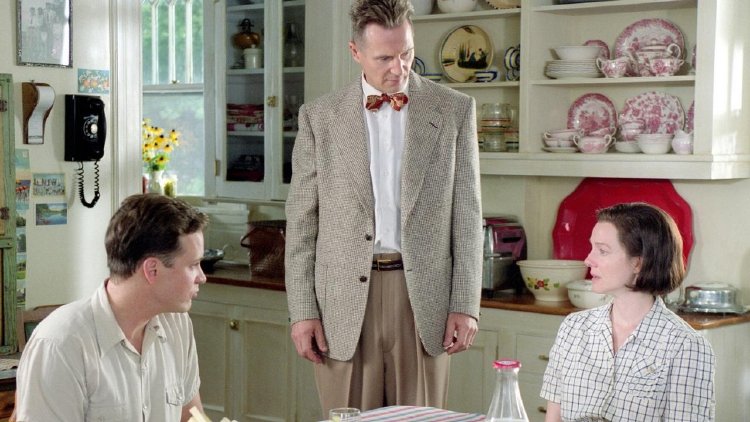 Alfred Kinsey (Liam Neeson, "Love Actually") was raised by a Methodist minister (John Lithgow, "Shrek's" Lord Farquaad, TV's "Third Rock from the Sun") so puritan he believed the zipper was the work of the devil. Alfred rebelled against his dad and went on to obsessions of his own, gathering a million samples of the gall wasp while teaching entomology at Indiana University. Prok, as his students called him, found his new calling after discovering the ignorance of his students in sexual matters. After teaching a wildly popular marriage class, Prok establishes the Institute for Sex Research with funding from the Rockefeller Foundation. In 1948 he published "Sexual Behavior in the Human Male" and what is considered normal in sexual behavior has never been the same because of "Kinsey."

Writer/director Bill Condon ("Gods and Monsters") follows up his wildly imaginative debut with a thought provoking examination of the life of the well know sex researcher in an ironically more buttoned-down style. Liam Neeson gives a rich performance as a man who can speak frankly about sex, yet is rebuffed in a marriage proposal for being 'too churchy.' Neeson lets us see what made Kinsey tick, but when the man's research institute turns into a hotbed of free love two decades before its time, the Kinsey marriage - the film's anchor - becomes obscured.

Kinsey goes on to win over the forthright young student, Clara (Laura Linney, "p.s."), who is intrigued by the professor's sense of wonder (a delightful scene has Alfred gifting her with a pair of sturdy lace-up shoes). Ironically, the couple have a hideous wedding night experience, but rather than hide from the problem, they address it outright, discovering that a simple surgery will enable Mac to enjoy Prok's over average size. Their wedding trip encompasses a stop at Kinsey's home, where Mac is horrified by his father's behavior, giving her a deeper understanding of her new husband and the ability to recognize history repeating itself. The Kinsey family, with three grown children, has unusually frank discussion at the dinner table, which irritates son Bruce (Luke MacFarlane, "Tanner on Tanner") in a photo negative mirror image of the earlier generational conflict.

Condon neatly segues the establishment of Kinsey's home life to his more provocative future with a stuffy reception for the publication of one of Kinsey's biology texts. Accepting the fact that others find his life's work boring, Kinsey is rejuvenated with the idea for his marriage class, which overflows with students shocked at the explicit photos and straightforward language Kinsey employs. A chance meeting with student Clyde Martin (Peter Sarsgaard, "Garden State") is the genesis for the sex institute and Kinsey's classroom surveys evolve into field trips across the country, Kinsey's passion for copious research samples visualized with hundreds of talking heads across a map of the U.S.A. Kinsey becomes famous with the publication of his report in 1948, but his 1953 followup on the human female upsets family values. Faced with rumors of voyeurism and wife swapping among other suspect practices, Kinsey loses his funding and support.

The R-rated "Kinsey" features pictures of an erect penis, full frontal male nudity (Sarsgaard) and 'home movies' of people engaged in sex, but the film is never puerile or titillating. Kinsey is portrayed as a man with genuine curiosity, obsessed with gathering data. The film's biggest failure is that it does not adequately contrast male and female feelings about sex, particularly within the Kinsey's own marriage. Mac is devastated when Prok confesses that he has tried homosexual sex with Clyde when the two were away on a trip and he cannot understand why she sees this as a betrayal of their marriage. Later, when Clyde tells Kinsey in his kitchen that he's asked Clara to have sex with him, her light-hearted admission that she might like that comes across as a joke given what has come before. She carries through, though, and it is unclear whether Mac has undergone a change of heart or whether she is getting back at Kinsey, whose feelings are also unclear. When an affair between Clyde's new bride Alice (Julianne Nicholson, "Tully") and a married coworker (Timothy Hutton, "Secret Window") causes a fight to break out between the two men, Kinsey only appears to see the practical solution, not the emotional fallout. Yet Kinsey clearly states later, when interviewing an incestuous pedophile (William Sadler, the Grim Reaper of "Bill & Ted's Bogus Journey"), that he remains non-judgmental unless an activity is not consensual or causes harm.

Although Condon allows this aspect of his film to go a little out of focus, he sharply captures the seismic shift of popular thinking that occurs as the result of Kinsey's work. In addition to the sensational press attention Kinsey and his Sex Institute is seen receiving, Condon uses two personal scenes to great effect. In one, Alfred stands up to his bitter father at his mother's wake, challenging him to one of his interviews. What is revealed is a breakthrough, allowing father and son to connect for perhaps the first and last time. Later in Alfred's life, a stranger ("Gods and Monsters'" Lynn Redgrave) tells Kinsey how his work allowed her to see there were others like herself, giving her the courage to find happiness in a lesbian relationship.

"Kinsey" is a well-acted, admirable film, but not a particularly memorable one. When questioned by a journalist about her husband's work, Mac responds 'I hardly see him since he's taken up sex,' a comment Linney delivers with no irony. Like the film itself, its earnestness overshadows a sense of playfulness.

Alfred Kinsey (Liam Neeson) was a dedicated, though unassuming, biologist whose claim to fame was his extensive study of the gall wasp. But, when his students at the University of Indiana seek out his advice about sex, he realizes just how little is known about the forbidden fruit. This prompts the researcher to begin his investigations that will change the sexual makeup of the post-war world in “Kinsey.”

Helmer/scribe Bill Condon takes on the former taboo – serious, academic sex studies on a massive scale at a time when prudery ruled America in the 1940’s and 50’s – and tells the story of the man who broke convention. Kinsey not only talked about sex openly and taught the subject in a formal course at the university. He began a research project that eventually compiled interview material on male sexuality from thousands of subjects and was funded by the Rockefeller Institute. His first work, Sexual Behavior in the Human Male, broke new ground and opened the eyes of America. But, his second tome, Sexual Behavior in the Human Female, caused a hue and cry across the nation that nearly killed the controversial Kinsey.

Condon tells Kinsey’s story starting as a young man living under the iron hand of his prudish, arrogant and opinionated father (John Lithgow). The restrictive environment and his father’s narrow mindedness – he believed the zipper to be the work of the devil - forced Alfred to pursue his own interest and he immersed himself in his zoological studies, becoming a world expert (maybe the only one) on gall wasps. While teaching, he meets and marries one of his students, Clara McMillan (Laura Linney), a bright, equally dedicated young woman. The couple’s sexual awakening becomes the basis for Kinsey’s interest in things sex.

Kinsey,” though it has the look of an ensemble film with its large cast of notable actors, is really owned by its three principles – Neeson, Linney and Peter Sarsgaard as Clyde Martin, Kinsey first recruit as an interviewer. Liam Neeson gives one of his best performances to date as the sexual studies pioneer as he moved from an obscure insect expert to one of the most controversial figures in America. Laura Linney has the tough role as Kinsey’s loyal wife but the actress gives a full dimensional performance and comes across as Kinsey soul mate and equal. Sarsgaard, always a good performer, does so again here but takes a back seat to the leads. The rest of the cast is unexceptional with Timothy Hutton and Chris O’Donnell phoning in their roles as Kinsey’s other researchers. Oliver Platt, Tim Curry and John Lithgow do likewise. One pleasant surprise is a small but effective cameo by Lynn Redgrave as Kinsey’s final interview subject. In the space of about a minute or two, her character puts all of the scientist’s research efforts into perspective and points out the incredible changes he evoked in America and the world.

Technically, you can’t fault “Kinsey.” Production design, by Richard Sherman, and costume design, by Bruce Finlayson, does a fine job of setting the late 1940’s period mood for the film. Frederick Elmes lends his experienced eye to the cinematography tasks at hand and gives a crisp look to “Kinsey’s” earth tone hues.

Kinsey” is a well-paced film whose subject matter is, at least, academically interesting. It deals with the societal mores and moods of the time and shows the opening shot of the sexual revolution that would explode across the land over the next decades. Helmer/writer Bill Condon crafts a story that depicts this revolution from a clinical viewpoint that strips away emotion as it deals with the physical aspects of sex. He also delivers some mirthful moments that make the characters all the more human.