Keep the River on Your Right: A Modern Cannibal Tale 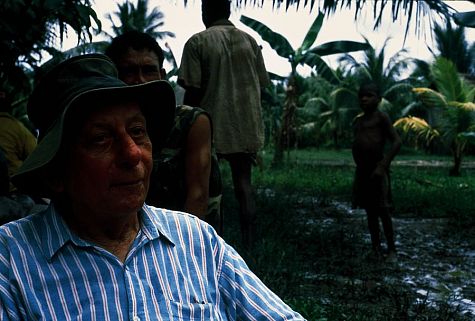 In 1950's New York City, Tobias Schneebaum was an artist who became an anthropologist, an out gay man at a time when most were closeted ('He was our house homosexual,' recalls author Norman Mailer). When Schneebaum heard about the Incan ruins of Macchu Pichu, he decided he had to visit
Peru. With an art grant, he did so, but a restlessness of spirit, an emptiness of the soul, took him even further. With only the clothes on his back and only a river to guide him, Tobias walked into the jungle for eight days, where he found the headhunting tribe of the Amarekaire and lived among them for a year. Directors David and Laurie Shapiro convinced Schneebaum, at the age of 78, to make the trip once more in "Keep the River to Your Right: A Modern Cannibal Tale."

Tobias Schneebaum is a fascinating subject. Artistic, intellectually curious, a great storyteller, he is above all a humanist with a spiritually uplifting outlook on life. The Shapiros not only found a compelling, charismatic subject, but a unique way to capture it, shaping their film the way a great
conversationalist talks, playfully following side threads that always weave back into the big picture.

As the film's credits roll, we follow senior citizen Schneebaum through a grocery store, immediately bringing to mind the cannibalism of the title.  While this is the sensationalistic aspect that may draw some viewers in, it becomes insignificant in the scheme of things (even though
Schneebaum says that the four words 'I am a cannibal,' haunt him every day).  Amusingly, the Shapiros illustrate that as people recoil from this part of Tobias' experience, they inevitably follow up with 'How did it taste?' (Like pork, if you're wondering.)

Today Schneebaum makes his living by lecturing on the Asmat people of Papua New Guinea, another headhunting tribe with whom he lived. Forty-five years later, Tobias travels back, and is not only recognized, but finds his lover, Aipit, whose photograph he had just shown as part of a cruise ship talk.  (Asmat men all take a male lover in addition to procreating with women.)
The gentle treatment these people show the old man speaks volumes (Schneebaum is worried about breaking his hip a second time) and the filmmakers capture poetic images from such mundane occurrences as feet trudging through mud.  It's here, in New Guinea, that we begin to here Tobias' philosophy, as he reflects on finding inner peace after 50. The melancholy projected as he takes leave of Aipit is palpable.

The filmmakers flit about present day New York City, as Tobias visits with Mailer, recalls a childhood exposure to the Wild Man of Borneo at Coney Island and takes a gondola ride in Central Park with a much younger lover.

The return to Peru, which Tobias clearly dreads, caps this lifelong journey with great drama. Schneebaum begins to have nightmares every day. He contemplates death as the camera records his profile in shadow against the stones of Macchu Pichu. It was here that he went on what he thought was a hunting expedition with his friends that turned into the massacre of another
village (he never witnessed headhunting in New Guinea). Lightning strikes twice as Tobias is again recognized after almost half a century and welcomed with open arms. The old people make jokes about wearing clothes now while the younger generation tell us that, although their people used
to headhunt, they don't like to talk about it - the same reaction we got from the Asmat almost a half a world away!

In the end, Schneebaum professes to be glad that he returned and so are we - not only because we were allowed to take the journey with him, but because in getting to know him, we've come to care about him.

Artist, anthropologist, archaeologist and writer Tobias Schneebaum has led, to say the very least, a colorful life. 45 years ago and funded by a Fulbright grant, this renaissance man walked into the jungles of Peru in a pair of canvas sneakers and the clothes on his back and spent a year living
with a cannibal tribe. But there is a lot more to tell about the man in documentary filmmakers David Shapiro and Laurie Gwen Shapiro's thought provoking work, "Keep the River On Your Right - A Modern Cannibal Tale."

I knew nothing, a few days ago, about Tobias Schneebaum, his fascinating life and studies about primitive cultures. "Keep the River?" opened my eyes to the story of this incredible man who, at age 78, is brought back to those places he explored, alone, so many years ago. We learn, early on,
that Tobias was, at one time, an accomplished painter who gave up his art to study anthropology. Taking his new knowledge and the Fulbright money he cast aside the trappings of civilization to enter the primitive, cannibal culture of the Harakambuit tribe of the Amazon.

This journey, though, is not all that "Keep the River?" is about. Tobias made a similar trip, some years later, into the jungles of New Guinea to live with another cannibal tribe, the Asmat. He is taken, by the Shapiros, on a new trek that will bring him back to his past lives in those distant
places. At first, the septuagenarian is reluctant to make the arduous trip.  He's afraid that his frailty may betray him and the possibility of breaking a hip, again, is genuine. More telling, though, is his fear of facing his past. It has been so long since he ventured to those distant places, he is sure that nothing and no one from that past is even left.

One of the many joys of "Keep the River On Your Right" is to see Tobias's reluctance to take the journey replaced with a real satisfaction and happiness for having made the enormous effort. Almost miraculously, in both Peru and Borneo, he meets old friends from his time in the jungle decades before. Most striking is his reunion with Aipat, an Asmat tribesman who was
Tobias's best friend and lover those many years ago. The wash of emotions that Tobias feels are palpably depicted and both gladness and sadness come through. Another poignant moment happens when Schneebaum returns to Peru and meets, again, a tribesman who remembers him from 45 years ago. It's an amazing story all around.

The Shapiros have crafted a docu work that utilizes modern footage (shot terrifically by Jonathan Kobel), archival file film recordings, excerpts from Tobia's files, clips from the feature film "Trader Horn" and the anthropologist's interview on The Mike Douglas Show from 1969. The Douglas
show, in particular, is most revealing as Tobias tells the emcee and his guests that he did, in fact, eat human flesh when living in Peru. The reaction, universally, is one of revulsion by the host and his panel, with the almost instantaneous follow-up question, "what did it taste like?" showing our morbid curiosity about such things. ("It tastes like pork" according to Tobias.)

The unbridled honesty of Tobias's telling of his story - he pulls no punches when he talks about his homosexuality or of eating another person - is an unexpected treat. He shares his years of experience with us as he talks about life and its wonders, of death and aging, and about living life
to its fullest. You can't help but come out of the theater feeling the positive vibes of this fascinating little man.

There have been some first rate documentary films making it to theaters in recent years. "One Day in September" is a gripping document about the Jewish hostages taken by Arab terrorists during the 1972 Munich Olympics.  "Sound and Fury" chronicles the real controversy of curing deafness in
children. "Keep the River On Your Right - A Modern Cannibal Tale" brings us into the life and times of Tobias Schneebaum, a truly remarkable man. Even is you don't like documentary films, this is one worth seeing