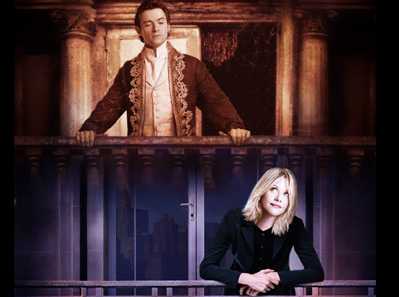 When NYC ad exec Kate McKay (Meg Ryan) investigates a commotion in her ex-boyfriend Stuart's (Liev Schreiber, "Scream 3") apartment directly beneath her own, she meets a stranger there.  Stuart informs her that he's found a hole in the time-space continuum and accidentally brought back Count Leopold, the Third Duke of Albany and inventor of the elevator, in cowriter (with Steve Rogers) director James Mangold's ("Girl, Interrupted") "Kate and Leopold."

James Mangold is building an interesting career, from his moving independent "Heavy," to the Stallone comeback vehicle "Cop Land," to a bio adaptation "Girl, Interrupted" and now romantic comedy that also crosses the sci-fi and period costumer genres.  He's proving himself adept as an actors' director, getting Hugh Jackman to shine as a romantic lead (Meg Ryan being an old hand at this genre) and coaxing a charming turn from Breckin Meyer ("Road Trip").

In true time-travel fashion, New York's elevators stop working when their inventor is displaced and Stuart literally takes the fall.  Desperate to return Leopold to his proper time before he himself disappears, he's instead carted off to the hospital with broken bones and put under psychiatric care while raving about his relative from 1876.  Kate, having not believed Stuart's tale either, unleashes a terrified Leo into the streets of NY when she finds Stuart's abandoned dog in the hallway needing a walk.  Her brother Charlie (Meyer), thinking Leo is a fellow actor staying in character, befriends the guy and invites him to dinner, much to Kate's chagrin.

In 1876, Leo was unlucky in love, but soon the courtly Leo is borrowing white horses in Central Park to save Kate from muggers, helping Charlie woo a woman, and helping Kate turn around a sagging ad campaign.  Leo even calls out Kate's boss J.J. (Bradley Whitford, TV's "The West Wing) when a business dinner to discuss a promotion veers into sexual harassment. What's a girl not to love?

The script is sweet, but not sappy, and attempts to stay within the bounds of time travel logic (although Stuart's given a bit too much leeway).  New York of old is nicely contrasted against the modern city with touchstones in the East River bridge and the still standing home of Leopold's uncle. Nostalgia for a less hectic time is further evoked by the use of standards "Someone to Watch Over Me" and "Moon River."

Comedy is not neglected with witty touches like Leopold's butler being named Otis and inventor Leo battling with the modern toaster.  After Leo delivers a lecture on the culinary arts having tasted his first modern meal, Charlie comes back with the McKay family's rendition - "Shake, shake the ketchup bottle.  None'll come out and then a lot'll."

The cast is uniformly excellent with some of the most satisfying screen time surprisingly going to Jackman and Meyer.  Ryan's less crinkly-nosed cute than usual making for a believable, stressed-out career woman.  The always dependable Schreiber shows a bent for physical comedy while Whitman gives J.J. a lot more depth than his type of role usually sees.  As Kate's assistant Darci, Natasha Lyonne ("Slums of Beverly Hills") is fine if underutilized.

"Kate and Leopold" takes a little too long wrapping up, but delivers a satisfying conclusion with its sentiment that love truly can transcend time.

Kate McKay (Meg Ryan) is a go-go-go Manhattan marketing exec who has her eyes on the top spot in her company's New York office. But, her ambitious plans take a very different turn when her ex-boyfriend Stuart (Liev Schreiber) announces that he has discovered a time/space portal that allowed him to go back to 1876, but he didn't expect to come back with, Leopold, the Duke of Albany (Hugh Jackman), in tow in director James Mangold's shot at romantic comedy with "Kate and Leopold."

We first meet Leopold on the day of a posh New York society party that is to be held in his honor. The event revolves around the empty-pocketed duke who, as arranged by his uncle, will pick one of the city's most eligible (read: wealthiest) maidens to become his wife and save the family manor. Leo is about to make his choice when he spots an odd man pointing a tiny box at him. The ever-curious aristocrat pursues the man in a rain-sodden horse chase to the newly built Brooklyn Bridge. The duke is about to stop the man when they plunge off of the bridge into the frigid East River. The next thing he knows, he is a stranger in a strange land. Welcome, Leopold, to the 21st century.

His noisy arrival at Stuart's apartment attracts the attention of downstairs neighbor (and Stuart's former girlfriend), Kate. The extremely focused and cynical ad exec resists the obvious charms of Leo but he soon wears her down with his chivalry, manners, dignity, intelligence and, oh yeah, tremendously handsome looks. As the romance between the two builds up, Stuart introduces a note of danger and urgency - Leopold has to get back to his time before the portal closes for good. You can guess how things will proceed in this cute, predictable, time-travel charmer.

Meg Ryan is getting too long on tooth for the light romantic comedies that made her reputation when she was young. She is starting to show her age and, here, is not the fresh faced young thing that graced the screen in "When Harry Met Sally" or "Sleepless in Seattle." If anything, the actress looked a little haggard and not in her best form. I also question the pairing of her with the much younger Jackman for the romance interest. There was little real chemistry between them and her Kate comes across more as Leopold's older sister than as the love that spans centuries.

Hugh Jackman, on the other hand, is Leopold in the flesh. The penniless aristocrat puts forth a romantic aura that women swoon over. He is also a handsome, heroic and gallant figure whose old-fashioned sense of right and wrong is refreshing to see at a time when cynicism is the norm. The actor captures the elegance that Leopold's noble birth would instill on the man as, penniless, he puts his own wants and desires aside so he can meet and wed a wealthy woman whose money can save his floundering family estate. Jackman is a genuine heartthrob and is the honey that will attract a sizable fem audience to this sweet little chick flick.

The supporting cast, though small, is up to the task of fleshing out the surroundings. Liev Schreiber, a much under-rated character actor, is solid as Kate's ex-boyfriend and time-traveler Stuart. Unfortunately, he is pulled from the picture for an extended period of time before being dropped back in time to set the space/time continuum straight. Breckin Meyer has found a niche in the role of Kate's brother Charlie, a young actor who tries so darn hard with the opposite sex but always finds himself alone. Leopold, whom Charlie thinks is also an actor and not a mid-19th century English aristocrat, mentors the likable young guy and teaches him how to get the girl. Natasha Lyonne is wasted as Kate's assistant, Darci, and given little to do.

James Mangold, whose previous works, "Heavy," "Girl, Interrupted" and "Cop Land," aren't exactly calling cards to romantic comedy, moves things along at a brisk, light-as-air pace that tends to gloss over things like Leo's assimilation into the new millennium with minimal shock over the differences of technology, then and now. Airplanes, TV, automobiles, microwaves et al are taken in stride by Leopold (he is touted as the inventor of the elevator), who seems to be comfortable whenever he is. The director, who co scripts with the story's author Steven Rogers, doesn't break new ground, except to give Hugh Jackman his first real lead role in the U.S. Time travel is a plot device that doesn't do anything too horrible to the science fiction concept.

We saw a work print of "Kate and Leopold," making it difficult to really judge many technical aspects of the film, like cinematography, editing and score, though the ample use of Gershwin song works well with the New York locale.

Hugh Jackman is worth the price of admission for a night out with the girls or as a date flick. It's a decent alternative when you find all the big event movies are sold out. You won't need a hankie, either.