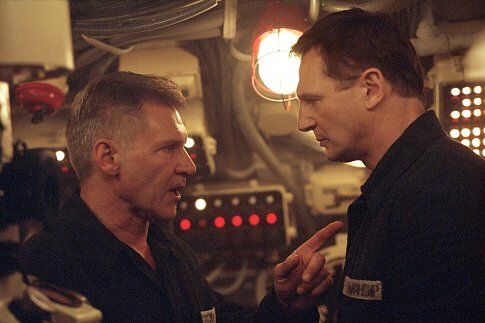 In 1961, with the United States and the Soviet Union on the brink of nuclear war, the Eastern Bloc leaders upped the ante when it launched its own nuclear missile submarine to counter the growing American Polaris sub fleet that lay, hidden by the sea, within easy striking distance Russia. The Communist response to the Yankee threat is doomed from the start because of the incompetent political system, shoddy, even criminally negligent, construction and the possibility that the submarine is fatally cursed, earning the new vessel the moniker "K-19: The Widowmaker."

The film opens with a tense moment as the crew of the K-19 prepares to launch one of its deadly missiles. Things go terrible awry as equipment fails and the captain, Mikhail Polenin (Liam Neeson), calls off the "attack" which is really a drill. He is disgusted with the rotten quality of his ships components and publicly (well, as public as you can in the Soviet Union without being sent to a gulag) declares that the vessel will not be ready to launch in the ridiculously short time the Communist bureaucrats demand. Polenin is unceremoniously relieved of command and a veteran, politically obedient captain, Alexei Vostrivov (Harrison Ford), is put in charge of launching K-19. Mikhail is retained as executive officer for his in-depth knowledge of the boat.

Vostrikov turns a blind eye to the bad construction, cheap, unreliable equipment and a bevy of reasons the boat should not be put into service. He also fires the ship's vet nuclear reactor officer for being drunk on duty and brings aboard a young lieutenant, Vadim Radtchenko (Peter Sarsgaard), fresh out of the academy with no practical nuclear sub training. As the crew feverishly works to prepare their new home for its first mission, one tragedy after another befalls the crew with 10 men killed before K-19 even hits the water. When the champagne bottle fails to break on her christening, we know that nothing good is going to come from "K-19: The Widowmaker."

Helmer Katherine Bigelow seems an unlikely selection to direct this near-all male, Cold War action thriller but, when you consider an eclectic career that includes "Near Dark," "Point Break" and "Strange Days" (though the latter I did not like), it makes some sense. Bigelow shows an assured hand here and does a credible job of sustaining suspense in a film where the ending is a foregone conclusion. Even though megastar Ford is the draw, the focus is not on him and she draws a real ensemble performance from her capable cast. Christopher Kyle's screenplay, from the story by Louis Nowra, does a solid job in laying out the brief history of K-19 in a taut, often gut wrenching way.

This leads me to why this is a good, well-crafted film and not a great one. As the disasters that occur aboard the K-19 pile up, earning the widowmaker handle from the crew, I found my jaw steadily tightening and stomach knotting. When the biggest mishap happens and a nuclear reactor meltdown seems a sure thing, I found myself cringing in preparation of the "yeech" factor that was about to happen. The disaster sustains the tummy clenching for long periods of time and, while well depicted, was not fun to watch, if you get my drift. This is not to detract from the quality of the film or the dedication of the filmmakers to make an honest accounting of true events. "K-19: The Widowmaker" is good filmmaking but the sustained clenched jaw aspect may be a turn off for some.

Techs are first-rate across the board. Lenser Jeff Cronenweth captures the close quarters of submariner life and his cameras are constantly on the move during the plentiful action. Production designers Karl Juliusson and Michael Novotny do a superb job of creating the retro tech of the Soviet submarine that has "made in Russia" stamped all over it. Costuming by Marit Allen is severe but accurate looking throughout. The score, by Klaus Badelt, has the appropriate ominous sounds as well as the heroic, inspirational moments.

The ensemble cast has a homogenous look, as one would expect in a navy that gave the best jobs to white Russians and Ukrainians and not to the more exotic peoples that made up the USSR. Ford only puts a little bit of accent to his speech while most of the rest, especially Neeson, don't try too hard. There isn't a Boris Badinov accent to be found anywhere. Peter Sarsgaard gets the best chance to put an arc on his character as he goes from novice to coward to hero.

For a film that revolves around the Cold War, "K-19: The Widowmaker" has little to do with the big picture and more to do with heroism, duty, loyalty and the family nature of a nuclear submarine crew. It is an inspiring film but one that is, at times, tough to take.