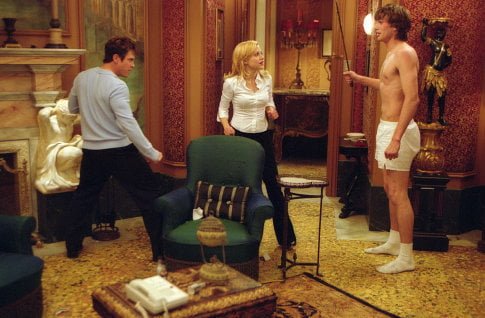 Sarah McNerty (Brittany Murphy, "8 Mile") is a free spirit from a wealthy, snobbish family who disapprove when she's swept off her feet by blue collar radio traffic jock Tom Leezak (Ashton Kutcher, "Dude, Where's My Car?"). The McNertys team up with Sarah's ex-boyfriend Peter Prentis (Christian Kane, "Life or Something Like It") and send him to Europe in an attempt to break up the couple who are "Just Married."

Director Shawn Levy rachets up the pain levels of his debut film "Big Fat Liar" in his sophomore outing. The opening scenes of an estranged, angry couple returning from a honeymoon feature physical abuse so nasty (a husband purposely knocks his wife down with a baggage cart) that one can't imagine anything worth seeing will ensue. Surprisingly, Murphy and Kutcher do develop some chemistry, although the relationship presented is too immature to make a believable marriage.

Keeping the violent slapstick front and center, the couple meet 'cute' when Tom beans Sarah full in the face with a football on the beach. Soon they're in exploratory conversation before hitting the sack. Screenwriter Sam Harper, who used his own disastrous Italian honeymoon for inspiration, gets points for some creative dialogue amidst the pratfalls ('You're dreaming Wellesley, I went to day care in a pool hall'). They announce their unpopular engagement, then get hitched, each with a big fat lie on their conscience (Sarah let Tom believe she'd never slept with Peter while Tom invented an alternative accident to the one he caused which killed Sarah's dog).

Italy shows off Sarah's worldliness and Tom's American boorishness. He destroys the electrical wiring in a 5-star castle hotel trying to utilize a sex toy, then insults the owner and they're thrown out. When they run out of gas in the Alps, his aggressive ploy to flag down help lands them snowed into a ditch overnight. His suggestion of a pensione in Venice turns out to be a rat trap. When Sarah intervenes with daddy to get them into elegant lodgings, Peter arrives and misunderstandings pile up. The couple have broken up by their return flight, but there's never any doubt that 'true love' will prevail.

Ashton Kutcher prevails at the slapstick element and has some truly funny moments, such as when he's attacked by pigeons in San Marco Square as Sarah sight sees, but otherwise his is of the sitcom style of acting. He does spin some extra effort into the faux drama of his radio announcements and the final desperate McNerty estate gate intercom pleadings. Brittany Murphy, however, bubbles with her kewpie doll brand of charm and adds a layer of down-to-earth social sophistication that makes her a pleasure to watch.

Kane is a bland rich white boy type as Peter. Singer Valeria is tarty as an American sports bar partier in Venice who wants to get into Tom's pants. David Rasche (TV's "Sledge Hammer") and Veronica Cartwright ("In the Bedroom") are two-dimensional as Sarah's wealthy parents (thankfully a joke about Tom now calling Mrs. McNerty 'Pussy' isn't overplayed the way such things usually are in movies of this calibre). Raymond Barry, so excellent in the independent "Interview with the Assassin," makes a late surprise appearance as Tom's dad.

California locations, including the McNerty's palatial estate are obvious and dull, particularly compared to the Italian Alps and Venice. Inexplicably, the nuptials of the daughter of a multi-millionaire sports team owner are held in a chapel which seats about twenty.

"Just Married," the first release of 2003, isn't totally awful. It just manages to squeak by as awfully average.