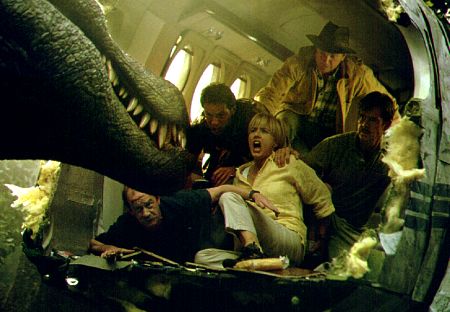 Steven Spielberg has relinquished the directing reins of his successful dino franchise and gives Joe Johnston ("Jumanji") a chance to play with the big boys in "Jurassic Park III."

Dr. Alan Grant (Sam Neill, "Jurassic Park") is becoming disillusioned. Paleontology is no longer the sexy science it once was since the Ingen Corporation cloned his subject matter. His lectures bring people interested in his adventures on Isla Nubla rather than his research and funding dollars are drying up. When the Kirbys (William H. Macy, "Fargo"; Tea Leoni, "The Family Man") ask him to be their guide for an anniversary flyover of Isla Sorna (the notorious Site B of "The Lost World") he's disdainful, but once they wave their checkbook, he reconsiders. However the Kirbys haven't given Dr. Grant their real agenda in "Jurassic Park III."

Of course, we, the audience, have been tipped off, given that the film begins by showing us Eric (Trevor Morgan, "The Patriot"), a young boy, and Ben (Mark Harelik, "Election") going for a paragliding adventure off that same island that goes awry (and looks like cheesy rear projection). Grant's established back home with a new right hand man, Billy Brennan (Alessandro Nivola, "Love's Labour's Lost") on site at a dig in Montana sorely lacking funds. He also pays a visit to old flame Dr. Ellie Sattler (Laura Dern, "Jurassic Park"), now married to another with a young son who calls Grant 'the dinosaur man' apparently for the sole purpose of dredging her up again for the film's poorly imagined finale.

Grant takes Billy along on the Kirbys trip, which is really an illegal gambit to save their son, that young paraglider. The couple aren't millionaires, making Grant's check bogus, and they're separated as well (Eric was with Amanda's new boyfriend, not that that makes much sense), meaning we're in for some gooey family dynamics while waiting for the dino dining. The Kirbys hired hands (and obvious bait) are a threesome led by Mr. Udesky (Michael Jeter, "The Gift"). (Didn't anyone consider that casting Michael Jeter and William H. Macy together and not having them be related was a little odd?)

As directed by Joe Johnston ("October Sky," "Jumanji") (Spielberg only produced this one) from a risible script by Peter Buchman and the "Election" team of Alexander Payne & Jim Taylor, "Jurassic Park III" is nothing more than a quickie monster flick with a couple of new dinos (a Spinosauraus, which goes head to head with the T-Rex, and Pteranodons). The plot, as it were, is a series of coincidences combined with extreme leaps of faith and a trifecta of stupid cell phone tricks. The effects are no longer new, and, as shot by television cinematographer Shelly Johnson, rather murky looking at times. Film Editing by Robert Dalva ("October Sky") was presumably done by machete, to keep this down to a 90 minute run time. I know of no other reason to explain the ridiculous ending which features the survivors confronting a pack of raptors, then being saved by the most ludicrous of logic jumps within a few minutes. 'Original' music by Don Davis just repeats John Williams' original themes.

While Neill and young Morgan attempt to inject some humor and humanity into the proceedings, the rest of the cast are plodding unexceptional.

"Jurassic Park III" will probably provide some quick entertainment for those who go into it knowing what to expect, the same crowd who maybe liked "The Lost World: Jurassic Park."

A friend described "JP3," for me, without seeing it: Adventurers (with Dr. Grant (Sam Neill) in tow) arrive clandestinely on Monster Island - it's called Isla Sorna, here. They meet a big, mean dinosaur - introducing the new kid, the Spinosaurus - have some of their number eaten, then run away. They see big, cuddly dinos, are chased again by another meanie, and run away. They make their way to "the compound," where more mean dinos try to eat them. Get chased, run away, get chased, run away, get chased, run away. My friend was dead on describing this cookie cutter effort from start to finish. Now, that's scarier than the monsters.

The neat thing about the first "Jurassic Park" flick was the fresh, never-before-seen prehistoric world created by Michael Crichton and put up on the big screen by Spielberg. It was exciting to see T-Rex for the first time or chew your nails as the raptors hunted down the youngsters. Sure there was a lot of hokum with the kids being the heroes, saving the adults from being eaten, but, we could get over the Spielbergian clichés and have a good time. This brave new cinema world was visited again, sadly, with the mishmash that was "Jurassic Park 2: The Lost World." A cross between the original, "The Road Warrior" and "Godzilla," the second outing just rehashed the new technology, poked some fun at itself and monster movies, but was pretty routine, and sometimes boring, with its "more is better" attitude.

This third (and undoubtedly not the last if this makes money) in the series uses formula, rather than originality, to convey its conventional man-against-monster yarn. The newness has worn off the franchise and it is now more of the same. What caused us to wow and wonder in 1993 has become commonplace in 2001. The F/X developed nearly a decade ago have been improved and made even more seamless, but there is not the quantum leap that Spielberg and company made with the debut of the original "Jurassic Park."

The story - the first of the franchise not adapted from a Michael Crichton book - doesn't try to invent anything new as it tells its tale of man against nature, albeit a nature artificially designed by man. The team of writers - Peter Buchman, Alexander Payne and Jim Taylor - provides an action/adventure yarn that is exactly as my friend described it to me. There are no surprises and few logical ties to the original. For example, in "JP1" there were no Spinosaurases or flying Pteranodons, but, a few years later, they have miraculously evolved from nothing. A T-Rex is going to make little T-Rexes, not Spinos. It is insulting to the fans of the franchise to be talked down to by the filmmakers. Don't they realize that fans notice these details? Some of us do have an attention span longer than 15 minutes, we should tell them.

I hope Sam Neill gets a good paycheck for this outing. The actor goes through the motions as Dr. Alan Grant and is left to mouth such lines as "Nobody move!" And that is about it for this veteran thesp. William H. Macy and Tea Leoni, as the divorced couple looking for their lost child on Monster Island (that's the basis for the "GP3" story), are adequate. Handsome Alessandro Nivola is conflicted (or constipated, it's hard to tell) as Dr.G's assistant. There is, of course, a kid - Trevor Morgan - as the focus of the search and, yes, he's smarter than the adults. The rest of the cast members, including Michael Jeter, are simply items on the dino lunch menu. Laura Dern reprises her role as Dr. Ellie Sattler and, with about 10 seconds of screen time, saves the day, long-distance.

Technically, as one would expect in a film with Steven Spielberg as an executive producer, this is a high-tech wonder of CGI and animatronics. The glitter has worn off since T-Rex first thumped his foot down, but the craftsmanship given to putting life into these prehistoric creatures should be lauded. The mechanical F/X, like a Spino attack on the adventurers trapped inside the wrecked fuselage of their plane, are first rate. Production design, by Ed Verreaux, does a fine job creating the lush jungle and dangerous compound sets for the monsters to play in.

Maybe it's time for the "Jurassic Park" park franchise to join hands with Toho and Godzilla. I can picture it now. The dinosaurs have taken over the United States and its up to Godzilla, Mothra, Rodan and the rest of the boys from Japan, to save the world and kick some Jurassic butt. I'd go to see it.