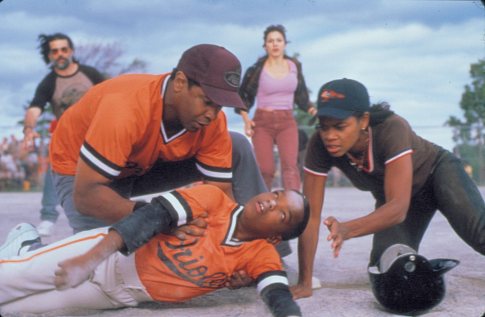 John Q. Archibald (Denzel Washington), his wife Denise (Kimberly Elise) and son Mike (Daniel E. Smith) are living through some hard times - his factory job has been cut to 20 hours a week, Denise's car is repossessed for missing payment and money is tight. But, for all that, they are still a close-knit and happy family until, during a Little League game, Mike collapses on the field. He is diagnosed with an enlarged heart and, if he doesn't get a transplant, he is going to die. John's insurance won't cover the expensive operation and the hospital administrator (Anne Heche) won't lift a hand to help. The desperate father decides that extreme measures are necessary and takes the hospital emergency room hostage in order to save his son's life in "John Q."

It's "Dog Day Afternoon" meets "Hospital" as the HMO industry comes under scrutiny in this politically correct, heart on its sleeve tome that, at its base, is a plaintive cry for health care for everyone. John Archibald, before his family tragedy, has faith in the system. Even though he is under-employed and over-extended fiscally, he is sure that his son will get all the care and treatment he needs after being diagnosed as terminal by Dr. Turner (James Woods). But, because he only works 20 hours a week, he is told that his health insurance that he has paid into for years will only afford him "second tier" coverage. Instead of getting the quarter million dollars needed for the critical operation, John learns that he is eligible for a mere $20000, no where near enough to save Mike's life.

His distraught wife, watching her son slowly slipping away, demands that John "do something!" to save the boy. Archibald runs into bureaucratic barrier after barrier and resorts to seeking help from family, friends and their church. It's not nearly enough, though, and the hospital administration announces to Denise that Mike is being released from care - a certain death sentence for the boy. Well, John does do "something" and takes Dr. Turner and all who are in the emergency room hostage, threatening to kill if his son does not get a transplant. Suddenly, the entrance to the hospital is swarmed by police, led by veteran hostage negotiator, Lt. Frank Grimes (Robert Duvall).

A standoff ensues as Frank works with John to defuse the situation. Archibald, calling himself John Q, agrees to release some of his hostages and it looks like Grimes may be able to end the crisis without bloodshed. Then, Chicago police chief Gus Monroe (Ray Liotta) enters the scene and, in a typical movie plot device, takes over the hostage scene and decides to use deadly force against John Q. Things move in the expected direction to a routine, but tense, conclusion.

There is not a lot new to the original screenplay by James Kearns, which is the weakest aspect of the film. It is often trite, manipulative and derivative of other films, but the craftwork behind the camera and the solid acting on many levels in front of the lens make "John Q" a sometimes gripping and entertaining diatribe against the health care industry, but at a very personal level. Denzel Washington, once again, proves himself to be one of America's top thespians and he does not hold back in his blue-collar portrayal of the title character. There is an emotional quality to his perf that makes you believe the actions the man is forced to take to save his son, even if the script is merely a button pusher.

The supporting cast, and it is a large one, does an exemplary job in filling out the character space around John Q. Kimberly Elise is a powerhouse in the role of John's wife and Mike's loving mother. Her utter despair over the pending death of her son is a palpable quality and she propels her character beyond the routine suffering spouse one would expect. Young Daniel Smith, as Mike, plays well off of Washington before being relegated to the role of the dying little boy. Other acting strength comes from the characters being held hostage by John. Shawn Hatosy is exemplary as a wise-ass, girlfriend-abusing guy named Mitch who gives his captor a lot of attitude before getting his just desserts. Fast-talking Eddie Griffin makes his mark in a small and, in the end, pivotal role as emergency ward patient Lester. Duvall doesn't get the chance to put much spin on his hostage negotiator role and veterans Ray Liotta and Anne Heche could have phoned in their two-dimensional characters, especially Heche, who has the unforgiving role as the uncaring bureaucrat ("People get sick and they die," she tells the despondent John at one point early on.)

Helmer Nick Cassavetes musters his cast and crew with an assured hand. Rogier Stoffers's lensing is in keeping with the film's overall high technical qualities. The rest of the tech crew, including editing by Dede Allen, helps keep things moving along at an energetic pace that belies the near two-hour run time. The actors and technicians help to elevate the screenplay above its source material. You may groan a time or two over the obvious script machinations, but this is minimum complaint. I wonder what would have happened if a more experience screen scripter had been given the task instead of TV writer Kearns.