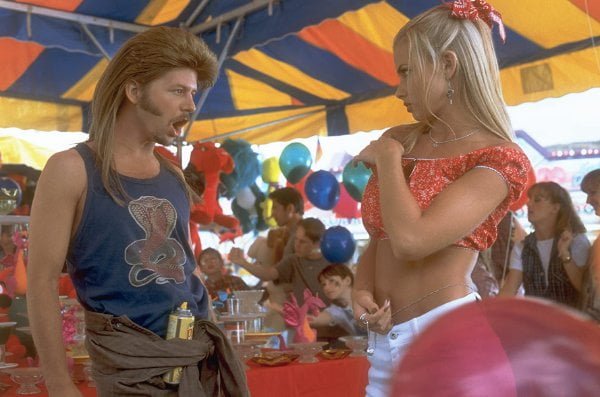 In 1985, little Joe Dirt (Eric Per Sullivan) was abandoned by his white, trailer-trash parents at a Grand Canyon tourist stop. He has had to fend for himself ever since and, even though he has lived a life of hard knocks, he has not forgotten his mom and dad. Now, 15 years later, Joe (David Spade) decides it is time to find his roots and begins his quest in "Joe Dirt."

David Spade, since the death of Chris Farley, has not been able to break out on his own in feature films - see "Lost & Found" for bad starring choices. Usually, he plays the caustic, wise-cracking smartass - a routine that gets tired outside of his Dennis Finch character on TV's "Just Shoot Me." In "Joe Dirt" there is a kinder and gentler Spade in the role of Joe, a not-too-bright but genuinely nice guy. Unfortunately, the movie isn't too good.

Joe Dirt is a pathetic little guy who sports a 70's style shag hairdo because, when he was a baby, his skull did not close correctly, so his mom put a wig on him. When his head finally closed up, she forgot to remove the wig and he has been burdened with the out-of-date hairpiece ever since. But, he has an intense joie de vie that keeps him going even when he gets covered in pooh-pooh or picked on by school kids. Joe firmly believes that if you are a good person, you will get what you want from life.

Joe begins a cross-country, crisscrossing journey to dig up clues and track down the parents that dubbed him "Dirt." This consists of a series of disjointed, short incidents involving various wacky characters. Some help him, some hinder him and you get the whole story via a radio talk show hosted by the sarcastic Zander Kelly (Dennis Miller). Joe is brought onto the show by the bored emcee to discuss what a loser he is and Joe tells his story. As the tale of his search unfolds it is so compelling Joe instantly gets a huge listener following.

The script by Spade and Fred Wolf is a mishmash of goofy slapstick scenes, emotional moments, an oddball love story (Joe gets the beautiful girl, Brandy (Brittany Daniel)) and a whole bunch of positive messages to the audience. Joe's life, as we see it, is a string of mishaps ranging from falling out of a balloon shaped like a molar to sleeping in a house being fumigated. There are laughs along the way, but most are forced and none too funny.

This Adam Sandler produced effort attracts a whole bunch of comedy figures to it, mostly in small, fleeting performances. Christopher Walken plays Clem, a school janitor in a witness protection program, who helps Joe, dignifies the film with his presence. The rest - Rosanna Arquette as an alligator rancher who hates gators; Joe Don Baker as an abusive, drunken parent to Joe's girlfriend (funny, huh?); Fred Ward as Joe's greedy, stupid father; Carson Daly as Carson Daly; and others - walk in and out of their scenes without note.

At the end of the screening for "Joe Dirt" I chatted with one of the patrons and asked what he thought of the movie. His response was, "If you want a no-brainer, it's just what the doctor ordered." Now, I see enough no-thinking-required movies as it is without wanting/needing to see yet another one, but I know what the guy means. I, personally, prefer to be challenged to think about a movie, but, if you want to leave your brain at home, maybe "Joe Dirt" is the prescription you need.