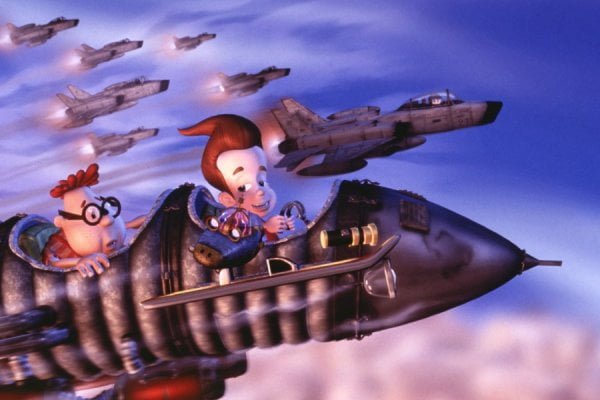 James Isaac Neutron (voice of Debi Derryberry) is a child genius capable of creating incredible inventions but, at heart, he is just a regular kid with regular needs. When his homemade satellite attracts the attention of an alien race of yucky creatures called Yoakians he doesn't know that he is putting all the parents in town in peril. But, when disaster strikes, Jimmy and his friends are up to the challenge of an interstellar rescue in "Jimmy Neutron: Boy Genius."

Jimmy Neutron (voiced by Debi Derryberry) launches a communications toaster before breakfast one day never imagining that the alien race who receive his message will think his parents look tasty!  Jimmy and his buddies Carl (voiced by Rob Paulsen) and Sheen (voiced by Jeff Garcia) sneak out one school night to attend opening night of a carnival.  The next morning they discover that the whole town's parents are missing.  Joyous prepubescent anarchy turns to misery within 24 hours and saving everyone's parents becomes the job of "Jimmy Neutron: Boy Genius."

This delightful Nickelodeon computer animation is colorful, clever and fun.  "Jimmy Neutron: Boy Genius" is that perfect combination of bright adventure to entertain the kiddies and clever jokes and retro cultural references to amuse the adults.

Jimmy, who resembles the Big Boy restaurant logo, is a brainy short uncool kid who treats everyone with respect.  While he draws up a new schematic for his robodog Goddard during class, his buddy Carl fumbles an inexpert rendering of a frog which Jimmy admires nonetheless. But classmate Cindy, formerly the smartest kid in school, enjoys seeing Jimmy humbled and has a big laugh when his miniaturizing laser fizzes during show and tell.  The audience is treated with seeing it work, reducing Jimmy's teacher Mrs. Fowl (voiced by Andrea Martin) into a pitched battle against the worm in her apple.

Both Cindy and her crush, cool cat Nick Dean (both voiced by Candi Milo), will come to depend on Jimmy as he retrofits amusement park rides for space travel and the entire class take off.  They find their parents under the alien mind control of Yokian King Goobot (voiced by Patrick Stewart) and his henchman Ooblar (voice of Martin Short), shapeless creatures formed by the egg-like domes they reside in.  Can Neutron save them all from being sacrificed to Poltra, God of Wrath?  Can they withstand the horror of seeing their parents do the Chicken Dance?

Screenwriters John A. Davis, David N. Weiss, J. David Stem and Steve Oedekerk ("Ace Ventura") may borrow from oldies like "Invaders From Mars" and newbies like "Mom and Dad Save the World," but their characters are fully realized and their details often inspired ('Not on the porch, Goddard!' exclaims Mr. Neutron as the robodog loses some scrap).  In fact, I had a grin on my face throughout most of this picture and would watch it again just to see if I could connect all the poultry references.

The computer animation creates a non-realistic world of its own and some of the images are beauts from Carl delighting in touching a llama at the petting zoo to the strange convoy of park rides soaring through space.

We first meet Jimmy as he, his robot dog Goddard and best friend Carl (voice of Rob Paulsen) are preparing to launch a satellite to investigate some strange readings Jimmy has seen on his home radar. Little does the young genius know that his space-born invention attracts the attention of the evil Yoakians who are looking for a planet to raid. When Jimmy and his friends sneak out one night to attend the opening of kid-oriented Retroland, the alien invaders deem the time as right to kidnap all of the unwitting parents in town to be sacrificed to their god, a giant chicken-like creature named Poultra. When the kids discover their parents are all gone, it is cause for celebration by all! But, when the reality sinks in and the bellyaches begin, it is obvious to Jimmy that he has to save the day. With the help of the rest of the kids in town, Jimmy converts the amusement park rides into space ships and they all head off into space to thwart the bad guys.

The filmmakers put an obvious fifties retro spin on "Jimmy Neutron" that twists the modern day sensibilities and technologies with an old-fashioned look and feel that harkens back to a less hectic time. Young Neutron's inventions take on Rube Goldberg proportions at times with a little bit of Buck Rogers cheesiness beneath the surface of the slick CGI effects. Retroville, Jimmy's hometown, is a mix of old and new with cars sporting chrome bumpers and big tail fins and the kids playing with their Gameboys. The Yoakian invaders, led by the powerful, petulant and childish King Goobot (voice of Patrick Stewart) and his churlish, cheeky assistant Ooblar (voice of Martin Short), are given character that is reminiscent of the Warner Bros. cartoons starring Bugs and Marvin Martian. Of course, the modern computer imagery allows the makers to really flesh out the background action so the icky comedic creatures from the cosmos can be considered full-fledged members of memorable cartoon bad guys club.

The vocal performers give life to their computer-created characters as Jimmy and his friends must brave the dangers of space to save their parents. Neutron's best friend Carl Wheezer isn't anywhere near Jimmy's league, brain-wise, but he is a good and loyal friend that goes along with his best buddy's outlandish adventures. Cindy Vortex (voice of Carolyn Lawrence) is, outwardly, Jimmy's opponent and competitor for brainiest child, but there is something else there as the two bright kids resist becoming friends. Mom and Dad (voices of Megan Cavanagh and Mark DeCarlo, respectively) are clueless to their son's genius and consider his wild, sometimes explosive, inventions as the normal activities of a normal kid. Sheen (voice of Jeff Garcia) is another nerdy kid who Jimmy befriends and Nick Dean (voice of Candi Milo) is the tough kid in school, a la Fonzie.

The set design, if that's what it is called in the computer-generated world, is lively and colorful for the younger kids' visual entertainment and inventive and witty enough for the older kids and adults. For instance, the space ships of the aliens resemble giant chickens and bear a strong relation to the Klingon Birds of Prey from "Star Trek." Yes, "Jimmy Neutron" is kids' fare but it is well made and intelligent enough for the parents to enjoy themselves, too.

There is little in the way of "messages" embedded in the framework of "Jimmy Neutron." There is an almost perfunctory "lessons learned" of "children: obey and honor your parents" and "parents: listen to your children." When mom and dad tell you not to mess around with evil aliens, you'd better pay attention to what they are saying. And, dad, when little Jimmy tells you that he almost broke free of the earth's atmosphere with his robot dog, check it out. This matter of fact moral to the story is refreshing in its brevity and conciseness.

While "Jimmy Neutron: Boy Genius" is not intended to compete with the likes of "Monsters, Inc." it will have a lot of appeal for the kids who went ape (like me) for the Disney/Pixar animation classic. It fits the need for rug rat entertainment for the holidays and beyond.