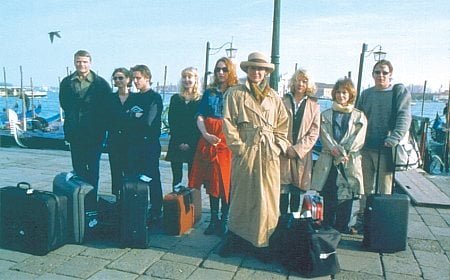 When a new pastor arrives in Copenhagen, he's encouraged to join an evening Italian class by the receptionist at his hotel. Writer/director Lone Scherfig follows the Dogme 95 rules (no director's credit on the film, only natural surroundings, music and light used, etc.) to present her story of intersecting lonely hearts in "Italian for Beginners."

Italy and Venice in particular have been erotically charging the blood of Northerners in film for some time, as can be seen in such differing films as "Summertime," "Don't Look Now" and "A Room with a View." When a group of troubled Danes begin to practice the language of love, the results aren't surprising.

Scherfig casts her class with suffering singles. Pastor Andreas (Dogme vet Anders W. Berthelsen of "Mifune") has recently lost his wife to schizophrenic suicide, but we know he has a passionate heart because he drives an Italian sports car. Hotel receptionist Jorgen Mortensen (Peter Gantzler, "Smilla's Sense of Snow") has been impotent for four years. He's under pressure to fire his best friend, rude restaurant manager Halvfinn (Lars Kaalund), who employs the film's only true Italian, non-Danish speaking Giulia (Sara Indrio Jensen), as a waitress. Halvfinn tries Jorgen's recommendation of hairdresser Karen (Ann Eleonora Jorgensen), but never gets past the sink stage due to Karen's problems with her alcoholic mother. Klutzy bakery worker Olympia (Anette Stovelbaek) lives with an abusive father who enjoys pointing out her shortcomings. Three other women attend the class, but they appear well adjusted, and so do not, apparently, seek romance.

Scherfig throws one surprising relationship of the non-romantic kind our way while gradually removing the obstacles that will allow three couples to form during a climatic trip to Venice. She mixes stark realities (euthanasia) with humor (a series of cross-scheduled funerals) that results in a humanistic comedy resembling "Celebration" crossed with "Bread and Tulips."

Scherfig's ensemble cast is pitch perfect, careening into and colliding off one another as effortlessly as the cast of the Swedish film "Together." Berthelsen's compassionate warmth contrasts beautifully with Kaalund's self-defeating surliness while the kind gentle nature of Gantzler is also found in the confused, almost frenzied, naivety of Stovelbaek.

"Italian for Beginners" is a real charmer that speaks a universal language.