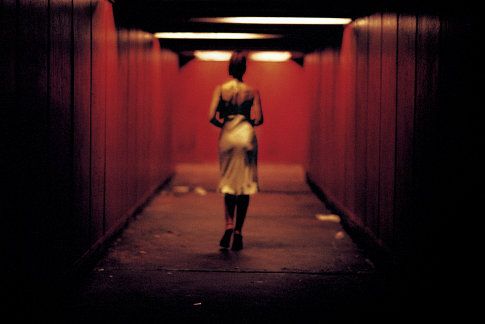 'Time destroys all things' the naked butcher of "I Stand Alone" (Philippe Nahon) tells a friend before police and ambulance sirens draw their attention to a commotion outside at The Rectum, a notorious Parisian gay club. There, Marcus (Vincent Casell, "Brotherhood of the Wolf") is being wheeled out on a stretcher, his friend Pierre (Albert Dupontel) following handcuffed by police. In revenging the rape of Alex (Monica Bellucci, "Malena"), they have taken actions which are "Irreversible."

Much has been made of two scenes of shocking violence since "Irreversible" debuted to walkouts in Cannes, but in a time when the beheading of journalist Daniel Pearl can be viewed on the Internet, one must remember that director Gaspar Noe is presenting fictional images to support his cynical response to Stanley Kubrick's hopeful "2001." Working, like "Memento," with 10 ten minute scenes shown backwards (Noe even has fun with his audience by beginning his film with its end credits scrolling backwards) and like Hitchcock's "Rope," in uninterrupted takes cut together against dark backgrounds, Noe proposes that rather than advancing, humankind has regressed to a bestial state.

Scene two may be the more horrific of the film's two visceral assaults. After wrapping the first scene by floating his camera out of Philippe's window to spiral above a whirling police light, Noe takes us on a descent into hell visualized like an amusement park's horror house and scored with a riff on the portentous opening music from "The Shining." An out-of-control Marcus interrogates men engaged in various sex acts as to the whereabouts of Le Tenia/the Tapeworm (Jo Prestia, "Femme Fatale"). Pierre trails behind, trying to reason with his friend. The dungeon-like interior is lit by strobing red light as Noe's camera jerks around, giving us just enough of a view to understand what's going on. Marcus goes downstairs and discovers a suspicious couple of men and attacks, but his arm is broken viciously in the melee. Diminutive Pierre then picks up a fire extinguisher and literally bashes the face off of Marcus's attacker, wielding his weapon like the bone used by "2001's" ape. Not until the horrific rape of scene six do we discover that Pierre killed the wrong man as Le Tenia watched from behind.

The camerawork throughout the rest of the film is more conventional, although no less artful. Thomas Bangalter's drill hammer score announces the part of the film we've come to dread, having already seen its bloody aftermath. Noe follows Alex from behind, then fixes his camera as a witness to the gut-wrenching violence visited upon her. The only diversion is the appearance of a male pedestrian at the end of the tunnel whom only we see appear and just as quickly leave, perhaps symbolizing both Noe's further disgust at the human race and his premonition of a likely reaction by his audience to bolt from the theater.

Now we can breath a sigh of relief and see how Marcus's misbehavior at a party caused Alex to leave without her men and cross beneath a busy street using an underpass a stranger ironically indicates is safer than crossing aboveground and the playful conversation amongst the three on the metro on the way there. Intellectual Pierre despairs over his inability to please Alex sexually and teasingly (or not?) calls Marcus an ape while Alex informs them both that women make all the decisions in the area of procreation, an advanced notion considering Noe began the film with a character who impregnated his own daughter. The film's ending/beginning shows domestic bliss between Marcus and Alex and Alex discovering she's pregnant after taking a home test straddling a toilet (another Kubrickian reference?). Noe tips his hand with the poster of "2001's" star child over the lovers' bed before his last idyllic scene ends with a spiralling camera over a children's lawn sprinkler that evolves into the eye of a galaxy.

Noe's disturbing and provocative film presents a simple idea in so bold a style that one is forced to reflect upon it. If the purpose of art is to elicit emotion, "Irreversible" delivers.