In The Mood For Love 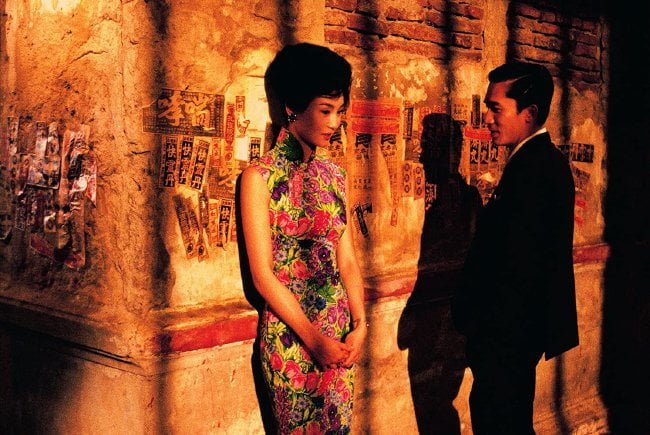 In 1962 Hong Kong, Mr. Chow (Tony Leung Chiu-wai, "Happy Together") finds out from Mrs. Suen (Rebecca Pan, "Flowers of Shanghai") that the room she had for rent was just taken by Mrs. Chan (Maggie Cheung Man-yuk, "Irma Vep") and directs him just down the hall, where another room is available. Within these crowded quarters, Mr. Chow and Mrs. Chan frequently cross each others paths, alone. When they gradually realize their spouses are engaged in an affair, the two begin a friendship, vowing to be 'nothing like them' in director Wong Kar-wai's Cannes Prix du Technique (editing, cinematography and production design) winner "In the Mood for Love."

Writer/director Wong Kar-wai, known for his hip, visually stylized, modern films like "Chungking Express," steps back in time not only for his story but for his presentation.

His Hong Kong of 1962 is a memory of a golden age where neighbors formed mini-communities in close quarters, observing bourgeois proprieties. The elegant beauty Mrs. Chan is married to a man usually away on business trips to Japan (he, like Mrs. Chow, is never really seen, just heard). He brings back foreign goods such as pocketbooks and rice cookers to the delight of all, although the uniqueness of his gifts betrays his affair. (In a beautiful foreshadowing scene, Mrs. Chan asks her husband to bring back two pocketbooks for her boss, Mr. Ho (Lai Chin). When her husband inquires as to why he needs two, she wearily replies, 'you know,' referring to the general ways of men rather than personal experience.) Handsome Mr. Chow's wife is a modern woman working as a hotel receptionist who frequently calls her husband with stories of having to work late that eventually give way to visits to a sick mother.

The lonely two cross each others' paths on rain slicked streets fetching dinners-for-one at a local noodle stall. Their hesitant relationship begins as they compare notes before confirming what they each already knew. They practice what they will say to their spouses with each other, then begin spending more time together collaberating on writing the martial arts serials they both love. Soon neighbors begin to talk and the emotionally restrained Li-zhen withdraws forcing Chow to declare his love and ask her to leave with him for Singapore.

This heartbreaking tale of unrequited (or is it?) love is an elegant romance for the ages and a masterpiece of its genre. Kar-wai's cinematographers Christopher Doyle ("Days of Being Wild," "Ashes of Time," "Fallen Angels") and Mark Li Ping-bin ("Flowers of Shanghai") brilliantly set their camera as an interloper viewing his subjects on the sly, creeping along halls and from behind objects. Slow motion is used several times to underline the melancholy aspects of the moment. The cheating spouses are shown in shadow, from behind, or via obstructed view.

Hyphenate William Chang Suk-ping, (production design, costume, editing) who's worked on all of Kar-wai's films, is a maestro here, from his recreations of 1962 offices, apartments and restaurants to the stunning dresses worn by Cheung (all of the same design, all boasting different shades of personality in their fabric, always consumately elegant).

Western musical choices, such as Nat King Cole's Spanish version of 'Perhaps, Perhaps, Perhaps' and other Latin music strongly aid in rushing us back to another era while setting the stage for love.

Tony Leung, who won Best Actor at Cannes for this role, is an honorable man of the time whose romantic nature is engaged by Mrs. Chan's natural beauty, quiet nature and companionship. Maggie Cheung evokes the pathos of a splendid woman who, unjustly treated by her husband, continues to cling to respectability even as her emotions are being pulled to the surface for what may be the first and only time. Never has a more elegant creature (Cheung cites the costumes as a great aid to her physical interpretation of the character) graced the screen. The two have enormous chemistry without needing any histrionics to convey their depth of feeling.

Wong Kar-wai has created a classic of the genre with "In the Mood for Love" that can stand alongside David Lean's "Brief Encounter." He's capable of moving your emotions with a shot of a woman's embroidered slippers left abandoned on the floor.

1962 Hong Kong is a city in transition both economically and socially. Director/writer Wong Kar-wai uses this time and place as the stage for a very different love story starring Tony Leung and Maggie Cheung as a star crossed couple that falls in love, but a love that will forever remain unrequited, in "In the Mood for Love."

The Hong Kong economy is about to take off and housing is at a premium. Chow Mo-wan (Tony Leung Chiu-wai) is a journalist who has taken a room, with his wife, in a building in the predominantly Shanghainese community. Coincidentally, on the day he moves in, without his wife's help, Su Li-zhen (Maggie Cheung Man-yuk) faces the same task in the adjacent apartment. Mr. Chow's wife is a hotel receptionist working late and Mrs. Chan's husband works for a Japanese firm and is abroad. Chow and Mrs. Chan are alone and lonely, most of the time, in their rooms.

Though physically at close quarters, Chow and Mrs. Chan never even have a conversation until Chow realizes that their respective spouses are having an affair and tells Mrs. Chan. Shocked by the discovery, the cheated upon pair begins to find excuses to spend their time together. First, they share meals, rehearsing how they plan to confront the spouses with the facts of their infidelity. The two grow closer and Chow invites Mrs. Chan to collaborate on a martial arts series for his newspaper. Mrs. Chan is reserved in showing her inner feelings toward her confidant, but Chow falls in love with her anyway. They are destined to have their love go unfulfilled.

This simple tale is deceiving. While the story is uncomplicated, there is a complexity in the number of pieces used to tell the tale, both visually and audibly. Maggie Cheung is a statuesque beauty who has an incredible amount of talent that allows her to say volumes with silence. She gives an elegant, understated performance as the forlorn Mrs. Chan, a woman who is tied to her society's views of formality and propriety. Her relationship with Chow is both intimate and stilted as she opens her soul to the man, but keeps her heart locked away.

Tony Leung Chiu-wai complements Maggie Cheung's perf with a fine one of his own as the cuckolded Mr. Chow. He's a mostly passive man who has a great deal of emotion within but lives in such a tightly packed society he can never really vent his feelings. As the betrayal of his wife sinks in and his quiet friendship with Mrs. Chan grows, Chow is cast into emotional turmoil. He eventually makes plans to leave Hong Kong, but only includes Mrs. Chan in his plans as an afterthought. The star-crossed couple keeps coming close to culminating their love over the ensuing years, but never close enough.

There are other, assorted characters around the leads, but they are for background and color only, acting as the couple's monitor against impropriety. Of note, one of the household members is Chin Tsi-ang, playing the building's Amah, the first martial arts heroine in the history of Chinese cinema, appearing in the 1925 film, "The Heroine of Jiangnan," when she was only 16-years old.

There are other pluses to the film besides the marvelous performances by Cheung and Leung. The screenplay, by the director, is simple, with just two characters - the sneaking spouses are never shown, just heard off camera or seen from behind - but is lush in its emotional appeal. I, the viewer, want Chow and Mrs. Chan to be together and feel the anguish at every missed opportunity. There is fine attention to detail, especially when they rehearse what each will say to their respective spouses about the affair. In one practice session, Chow play-acts Mrs. Chan's husband as she confronts him about his infidelity. The seen concentrates on Chow, camera behind him, as he noisily eats, playing the crude buffoon while his "wife" challenges him. The play-acting become important to Chow and Mrs. Chan as the game binds them even more closely.

The cinematography, by longtime Wong collaborator Christopher Doyle and Mark Li Ping-bin, is stunning. The voyeuristic quality of the lensing brings us, intimately, into the action as we watch the subtle interplay between the two leads. Oftentimes, the camera shows only half of the action, with a wall or a door blocking our view of one or the other of the two characters. This technique draws us into the scenes and makes you feel a part of the film. The style is reminiscent of Gordon Willis when he collaborated with Woody Allen in some of his best films.

High praise needs to be given William Chang Suk-ping. In addition to being production designer on all of Wong Kar-wai's films, he has also dabbled, to critical acclaim, in costume and editing. For "In the Mood for Love" the talented craftsman performs all three tasks and does them with aplomb. The close quarters of the sets and the use of retro-60's chic materials gives a bold and kitchy period look to the film. Costuming is splendid, especially for Maggie Cheung. The traditional/modern look of her attire, coupled with her lithe figure and grace of movement, is memorable and distinctive. Editing, like the camera work and direction, is superior. A Western style string score, by Umebayashi Shigeru, and the use of Nat King Cole's Spanish rendition of "Perhaps, Perhaps, Perhaps" round out the terrific techs for the film.

My only criticism of "In the Mood for Love" is that the sad, melancholy story of ships passing in the night carries through to the end. It all makes sense in the context of the story, but I really wanted the couple to be happy. That's the American moviegoer in me, I guess. But, I can't deny masterful filmmaking when I see it.