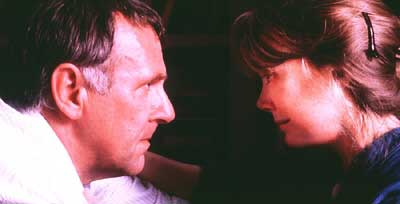 Dr. Matt Fowler (Tom Wilkinson, "The Full Monty") sneaks out of his office every lunchtime to meet his son Frank (Nick Stahl, "The Man Without a Face"), toiling for the summer in the patriarchal job as lobsterman to earn money for graduate school. The boyish collusion between father and only child exasperates Ruth Fowler (Sissy Spacek, "The Straight Story") who strongly disapproves of Frank's relationship with older, divorcing, mother of two Natalie (Marisa Tomei, "What Women Want"). When Frank tries to protect his lover from her jealous husband Richard (William Mapother, "Mission Impossible: 2"), he's murdered and his bereft parents' relationship strains to the breaking point "In the Bedroom."

Actor Todd Fields ("Eyes Wide Shut") makes a stunning directorial debut with his and cowriter Rob Festinger's adaptation of an Andre Dubus short story. This shattering examination of a family tragedy is powerfully acted at every level.

The Fowlers live a comfortable life in the yuppie enclave of Camden, Maine (also the home of "Peyton Place"). While they respect the Yankee labors of Matt's fisherman dad, their friends are wealthy local businessmen like restaurateur Willis (William Wise) and his wife Katie (Celia Weston, "Snow Falling on Cedars"). Ironically, when they throw a birthday party for blue-collar Natalie's son, it is local established Strout business's son, Natalie's soon to be ex-husband Richard, who is not welcome. Tension is also palpable when Natalie tries to connect with Ruth through the Eastern folk music Ruth teaches.

The first time Frank's relationship results in violence, Ruth begs Matt to call the police. The second time it's too late and unsaid words are thick in the air. When the case against Richard begins to lose ground, Ruth's anger escalates and finally boils over, resulting in a surprising diatribe from Matt. He immediately regrets his words, but his subsequent efforts to soothe his wife only prove his insight.

Fields' elegant storytelling is layered with profound details such as the harsh contrast between two pre-dawn drives accompanied by Boston Red Sox radio or the utterly alien intrusion of a schoolgirl selling chocolate bars for charity. Rich symbolism lives in the manual drawbridge worker who evokes the River Styx and the lobster trap's 'bedroom' where a third ensures trouble. The film is bound to its location of midcoastal Maine where societal classes can be drawn by the seasons. Fields immaturity as a filmmaker is evident only in an overuse of transitory fades to black.

Tom Wilkinson gives the powerhouse performance of the year with his kindly small town doctor. Wilkinson, surrendering his British accent to soft Yankee, shows fierce love for his son, enjoyment in many male friends while subtly blunting his wife's controlling nature with impish good will and gentle common sense. Spacek speaks volumes, no dialogue necessary. Her overprotective mother is so intense she'll make your muscles tense just watching her. Her final words, inquiring if Matt wants morning coffee, are so chilling, her character takes on proportions of Lady Macbeth.

Support is also strong beginning with Tomei's beautifully shaded, perfectly accented Natalie. She and Nick Stahl have great, fatalistically fragile chemistry. Mapother's seething Richie, a tightly clamped fist, becomes surprisingly sympathetic as the tragedy plays out and his performance arc is crucial to the development of other characters. Wise efficiently captures the down-to-earth loyal bedrock of a friend while Weston puts a sweetly spacey spin on her contented homemaking grandmother. This is one fine ensemble cast.

"In the Bedroom" is a classic American gothic.

The Fowlers of Camden, Maine are, on the surface, a normal well-adjusted family. Matt (Tom Wilkinson) is a well-liked local and town doctor. Ruth (Sissy Spacek) is a choral music teacher and an import from New York. Even with their busy professional lives the couple always has time to dote on their son, Frank (Nick Stahl), a young man headed for graduate school, working as a lobsterman to make his expenses and, much to his mom's chagrin, involved with an older single mom, Natalie (Marisa Tomei). The nice, routine life of the Fowler family takes a sudden, tragic turn when Natalie's not-quite-ex-husband Richie Strout (William Mapother) decides he wants his wife and kids back in Todd Field's debut feature film, "In the Bedroom."

Helmer Field has crossed over from in front of the camera ("Eyes Wide Shut") to behind in an accomplished work that, thanks greatly to the outstanding cast involved, has the assured look and feel of a more mature directing hand. Field and Rob Festinger adapt a story by the late Andre Dubus that is a study of a marriage that is falling apart. The Fowler couple doesn't know it but their raison d'etre is based entirely on their love for their good-hearted, eminently likable son, Frank. Mom would do anything for her son and is overtly concerned about his relationship with Natalie. Dad treasures the times when he can play hooky from his busy practice and spend time helping Frank with his lobster fishing.

When Richie, the scion of a local businessman who employs many of the town's folk, comes back into Natalie's life, his intent is to win her and the kids back. But, the violent nature of Richie, especially when compared to the sweet, gentle demeanor of Frank, is the reason his wife left him and, as we know, a leopard, especially a spoiled one like Richie, can't change his spots. When he cannot win back his woman, Richie's old pattern of violence and abuse returns and Frank tries to stop him from hurting Natalie or her kids. The result is deadly.

All of this takes place well before the halfway mark and, then, the story of a marriage falling apart kicks in. Neither the Fowlers nor we are aware of the scope of the loss of their beloved son or what it means to their lives. It is soon apparent that their marriage was based almost entirely around Frank, from infancy to budding adulthood. But, Ruth never let go of her little boy and she blames Matt for his tragic death. Matt is overwhelmed by his own loss and slowly, inexorably forced to a path of revenge. In the end, there are no winners.

First and foremost, the draw to see "In the Bedroom" is the superb acting by the principles. Tom Wilkinson is a powerhouse as the conflicted father who must come to grips not only with the tragic murder of his son; he must re-establish his relationship with his wife, Ruth, but, is it too late for them? Both parents have doted on Frank and the young man became the lynch pin of their marriage. Now, with the loss, neither parent can cope and they have grown so far apart, without knowing it, that they are not prepared to help each other. Wilkinson, from his doctorly composure to his educated Maine accent, gives one of the best performances of the year as Matt Fowler.

Sissy Spacek is chilling as the mom who suffers her loss more with anger and revenge in mind than with sorrow. She doesn't want justice for her son's murder, she wants revenge and Matt is the one who must fulfill her wish. Any warmth that Ruth displays early in the film is soon cast aside with Frank's demise. It becomes obvious that her cold demeanor is her real self and her matter of fact reaction to later events give you a glimpse of the monster that lives beneath the mother's surface. Spacek's is not a likable character and, contrary to her usual kindly type, and is all the more boffo for it.

Marisa Tomei is convincing as the object of Frank's affection and the target for Richie's abuse. Unfortunately, her Maine accent is terrible and distracting, keeping her perf somewhat at arm's length, but she does well as the protective mom who really loves Frank, despite the age difference. Nick Stahl is first rate down the line and, in spite of his early departure from the film, makes an indelible mark on your mind. William Mapother does a superb job of fleshing Richie into more than just a bad guy. William Wise is quietly effective as Matt's best friend who will do anything for his old buddy.

Techs are good, though not great. I got a tremendous charge watching the characters as they travel about the Maine locations of Rockland and Camden, places I have known for years. But, this is an actors' flick and they are the reason we come to see "In the Bedroom."