Interview with the Assassin 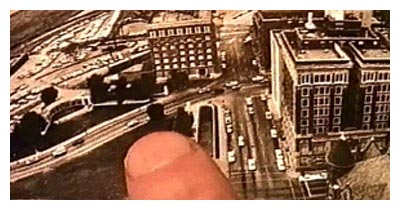 Out-of-work TV news cameraman Ron Kobeleski (Dylan Haggerty) is summoned to the home of his reclusive neighbor, Walter Ohlinger (Raymond J. Barry), on the pretext that the older man has a big secret to tell. With camera running, Ohlinger tells him that he was the man on the grassy knoll by Dealey Plaza in Dallas on that fateful Friday, 22 November 1963. Was Walter, as he claims, the mysterious second gunman in the assassination of President John F. Kennedy? The answer may well be held in "Interview with the Assassin."

Unemployed San Bernadino cameraman Ron Kobeleski (Dylan Haggerty) has his life turned around and his family placed in jeopardy by the simple act of meeting retired neighbor Walter Ohlinger (Raymond Barry, "Training Day"). The video document Ron's requested of Walter when he learns his occupation begins with Walter asking Ron if he's familiar with the date November 22, 1963. Ron's about to have an "Interview with the Assassin."

Taking notes from "The Blair Witch Project" and an unsettling encounter from his college days, writer/director Neil Burger has created a compelling fictional documentary featuring a riveting performance from character actor Barry. If in the end, "Interview with the Assassin" loses some shock value for following "Blair Witch," it is nonetheless a technically assured thrill ride.

Kobeleski's initial disbelief is lured into paranoia by Ohlinger's calm statement of fact. He has an answer for everything. He's chosen this point in time to come clean because of a death sentence via cancer. He has the casing from the fatal bullet he shot from the grassy knoll. His final quest, to find the Marine sniper squad (trained to assassinate Castro) leader who ordered the hit, John Seymour (Jack Tate), also becomes Ron's. The assassin and his confessor travel to Dealey Plaza ('never met him' Ohlinger says of Oswald) and visit the gun shop where Ohlinger purchased his weapon. In the most "Blair Witch-like" moment, Kobeleski's camera lurches around when Walter and fellow ex-Marine Jimmy Jones (Bay of Pigs survivor Jared McVay) use him for target practice ('You talk to Walt. He knows all the secrets,' Jimmy tells Ron). Ron begins to suspect he's under surveillance at home, but a visit to Walter's ex-wife (Kate Williamson, "Dahmer") begins to make Ron doubt Walter's claims. When the duo travel to Washington D.C., Ron is horrified to discover he may have been empowering a delusional nutcase. Or has he?

Burger and his digital video director of photography Richard Rutkowski ("Chelsea Walls") painstakingly maintain Ron's viewfinder POV, with a few concessions to Ron's home surveillance cameras, throughout. As in the 1947 Raymond Chandler noir, "Lady in the Lake," we see our hero rarely, via his reflection, although his voice is a constant presence. Barry, who is on screen for the large percentage of the film, demands attention. Resembling actor John Mahoney wearing half-tinted aviator shades which partially obscure his eyes, Barry speaks in a quiet, steady monotone. His delivery is key to the film's suspense, which Barry builds and ebbs with the pacing of his speech, most effectively at the grassy knoll where he recounts JFK's assassination and his escape.

Burger's well written script plays off our natural inclination to believe in conspiracy. As Walter demonstrates to Ron how he aimed his shot, Ron asks 'No one saw you?' 'There was no one around.' 'That was lucky.' 'Who says it was luck?' Ohlinger's character is handily given motivation with one statement - 'You kill the most powerful man in the world, I'd say that makes you the most powerful.' Burger neatly seesaws Kobeleski's world between belief and doubt in his subject with paranoia an appropriate response either way.

Burger's economical story telling becomes a bit too helter skelter as he rushes to a hasty climax, but "Interview with the Assassin" will keep you guessing right up to its post-finale character history.

Writer/director Neil Burger has taken "The Blair Witch Project" a step further in his faux documentary that claims to have the answers regarding the Kennedy assassination in 1963. Cameraman Kobeleski is shocked when neighbor Ohlinger confesses to being the second gunman atop the infamous grassy knoll in Dallas when Lee Harvey Oswald reportedly acted alone in the killing of the president. Walter's revelation, if proved true, would blow the lid off of decades of cover up and subterfuge and could be Ron's ticket to fame and employment.

As Kobeleski delves into his informant's claim, he first questions why the man only now has decided to tell his story. Walter tells Ron that he is dying of cancer and wants the truth of Kennedy's death to come out before he leaves this mortal coil. The man's tale is so believable and detailed that Ron is convinced that Ohlinger is telling the truth and has, indeed, "the story of a lifetime." The duo journeys from Los Angeles to Dealey Plaza where Walter describes, from the notorious knoll, the grim, vivid details of the events that took place 39 years ago.

Helmer Burger, with a coldly believable performance by Raymond Barry, creates a realistic story that gives answers to some, though not all, of the questions that have plagued us since that November day in 1963. As Walter and Ron journey across the country, the assassin explains the events that have been speculated on and denied (by the Warren Commission) but could point to the conspiracy of the century. Walter's words ring true and his chronicler dutifully records the confessions on his digital camera. As they try to get corroboration for Ohlinger's story, the film stirs up a mixture of non-belief when his ex-wife declares that "Walter was a liar and, I guess, he still is a liar" and sickening possibility of truth when a former comrade of Walter's reiterates the assassin's claims.

Burger treats his script for "Interview with the Assassin" as a transcript of events and gives the film believability. Barry, with his half-darkened eyeglasses, plays Ohlinger with a nondescript, clipped manner of speech that makes you believe he is telling the truth about his involvement in Kennedy's death. As he describes leaving the scene of the murder, Walter looked at the people around him and said, "They had no idea that the world was turned upside down - and I turned it." It is all matter-of-fact to the man and Barry does a chilling job of making you believe he pull the trigger that day.

Dylan Haggerty does a decent job as the ever-present but mostly unseen cameraman, Ron Kobeleski. Whether he is wielding his digital camera or chronicling events with a mini-camera hidden in a pair of eyeglasses, Kobeleski is always there, even if almost never in the picture. As Walter's words hit close to home, Ron becomes more and more convinced of their veracity and the paranoid idea that others may be watching (or worse) himself and his family. The rest of the cast, especially Jared McVay as Walter's former colleague and fellow assassin Jimmy Jones, help give credence to the documentary look and feel the makers strive to attain. (McVay, in real life, was one of a 12-man team sent into Cuba just before the disastrous Bay of Pigs fiasco, adding a bit of verisimilitude to the film.) The rest of the cast helps make this feel like the real thing.

The techs, particularly the dead on camera work by Richard Rutkowski, succeed in making "Interview with the Assassin" a superior faux documentary that gives credence to all of the conspiracy theories that were spawned by the gunfire in Dealey Plaza so many years ago. Add to this equation the utterly realistic performance by Ray Barry and you get a good deal of food for thought.