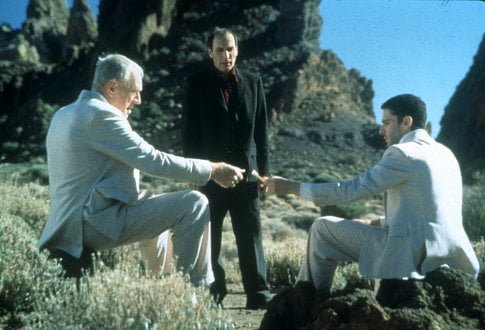 A distinguished gentleman sits at a high stakes roulette game and is raking in the money. The manager of the casino comes up behind the player and places his hand on the man's shoulder. Suddenly, the gambler's luck changes and he loses every spin of the wheel. Thus begins freshman director Juan Carlos Fresnadillo's examination of games of chance and how luck is a commodity that can be bestowed or taken away in "Intacto."

When Federico (Eusebio Poncela, "Law of Desire") tells his mentor, casino owner Sam (Max von Sydow, "Minority Report"), that he wants to leave to play the circuit, he's literally robbed of his luck and cast out. Desperate to regain his lofty ranking in the secret society of gifted gamblers, Federico makes a deal with Tomas (Leonardo Sbaraglia, "Burnt Money") who lies in a hospital bed, the sole survivor of a plane crash. Eager for the wealth Federico offers, young thief Tomas cautiously agrees unaware that he's about to enter the strange world that is "Intacto."

Spanish director Juan Carlos Fresnadillo has been mulling the link between luck and death since, as a young boy, he witnessed the aftermath of the 1977 747 runway collision in his homeland Canary Island of Santa Cruz de Tenerife. He and cowriter Andres M. Koppel have invented a world of vampiric gamblers that exist on a plane undetected by ungifted mortals.

At first Tomas is suspicious of Federico's assurances of easy wealth, but when he wins his first round, where three people wager huge stakes that a fly will land on their treacle streaked forehead, he's hooked. (A fly's fancy was also used to convince a doubter in "Girl on the Bridge," another film about fate, luck, love and death). Meanwhile a cop, Sara (Monica Lopez), is introduced investigating this underworld when she discovers Horatio (Guillermo Toledo) dead on the side of a highway blindfolded, the victim of a test of his own luck ("Unbreakable's own villain and victim in one). When Tomas and Federico take possession of the wagered home of Alejandro (Antonio Dechent, "Day of the Beast"), a bullfighter with a spotless record who nonetheless lost to crash survivor Tomas, they soon find Sara snooping about and must move on. Tomas manages to scale the ranks of the lucky and finds himself competing against the elite, where he will again meet Alejandro, but unbeknownst to him Federico has wagered something too precious for Tomas to lose.

"Intacto" crosses into the realm of the supernatural with Fresnadillo's twist that the truly lucky can steal luck, usually from the unsuspecting masses whom he portrays in one eerie scene like walking dead. This twisty thriller is peopled with those high on the infallibility of their own luck, spurred on by a growing greed, yet it is at its most interesting when exploring survivor's guilt (shades of Peter Weir's "Fearless"). Fresnadillo neatly balances this aspect of his script between two characters - Sam, who we learn is a concentration camp survivor, and the one who is ultimately after him - Sara, who flashbacks reveal lost her family in a car crash which spared her. The gift of luck (and ability to steal it) which gave them life appears to make each flirt with death.

Fresnadillo used the unearthly and remote lava fields of his homeland as home base for Sam's casino, heightening the effect of a secret, privileged club. The bunker-like area where Sam resides is stark, the only decoration a pink and red neon 'Good luck' sign flashing at its entrance. Once inside someone unfamiliar with the layout is presented with three doors, a demonic Monty Hall at work.

"Intacto's" cerebral machinations distance the viewer from emotional connections with its characters, but it is a dynamic piece of work from an exciting new voice.

This is a complicated psychological yarn that explores the concept of luck. Everyone knows someone who always seems to have thing go his or her way. "Boy, is he lucky" we say of such people. But what if luck is a real "thing" that you can have, or not? A thing that, if you were so empowered by the gods of chance, you could take from someone else and use as your own?

First-time helmer and co-scripter Fresnadillo (with Andres M. Koppel) has created a stylized work that is akin to such other gambling films as David Mamet's "House of Games," but the rookie has carved a niche of his own with the original and captivating "Intacto." Federico (Eusebio Poncela), the survivor of a massive earthquake, has discovered that he can take a person's good fortune away with the touch of his hand. For years, he has managed the casino owned by his own "god of chance," Sam (Max Von Sydow). His mentor survived, against all odds, the conflagration of the Holocaust and now gambles at only the highest level for the biggest stakes.

Federico declares his independence and seeks to end his partnership with the older man but Sam does not take the break well. He strips his protege of his ability to steal the luck of others and banishes Federico from the casino. This begins a vendetta that links the outcast to Tomas (Leonardo Sbaraglia), a young thief who is the lone survivor of terrible plane disaster. The pair takes their cache of extraordinary luck and wager against others of the same ilk. While investigating the thief, the games come under the obsessive attention of Sara (Monica Lopez), a policewoman who walked away from the metal and flesh ripping car accident that left her husband and young child dead. She wants to learn the truth about the secret gambling ring where the mysterious Lady Luck can lead its players to death. All of this builds to the inevitable showdown between Federico and Sam.

I can't think of a film that so intricately explores the idea of luck, as does "Intacto." Whether you have it, or not (the film makes the point that there are those with good luck, bad luck and, for most, no luck), will dictate the paths one's life will take. But it's more than picking the right number at the roulette wheel or winning at black jack. In this fable world the film inhabits the highest rollers will bet anything to prove their gift. A bullfighter, Alejandro (Antonio Dechent), who has never been gored or injured in the ring, bets his palatial home. Another gambles an expensive Jaguar and others even more on a bizarre series of games of chance. The games are a mix of weird to stomach churning images.

In one gamble, the players smear their hair with treacle water and sit in a darkened room, blindfolded, as a praying mantis is set free. The winner is the one the bug lands on and he or she will take all. Another game has the participants, again blindfolded with their arms tied behind their backs, run full speed through a forest of trees. The winner is the one who doesn't smash his face in with a collision with a conifer. Federico and Tomas build their store of luck as they prepare for the big one with Sam (I won't go into this part because it is too riveting and I don't want to spoil it) while Sara continues her hunt for Tomas and to get answers. It is an intelligent and complex screenplay with action, suspense, intrigue, humor and imagination.

The locale of the casino is a creative and unique setting on the Canary island of Tenerife. The gambling house is set in the middle of a huge lava field of a still-active volcano. The strange, unearthly landscape is strewn with enormous chunks of lava and looks like a giant farmer has just tilled the black soil. It is beautiful in a forbidding way and makes for quite a stunning setting.

The actors do a fine job in bringing life and dimension to their characters. These are people who live life at a level we mere mortals can only briefly attain, if ever. Eusebio Poncela, as Federico, is cool and calculating and, when he loses everything because of Sam, gets back into the game without hesitation, knowing he is a match for his former mentor. Leonardo Sbaraglia as Tomas is second banana to his partner, not knowing just how special his gift is. Monica Lopez puts a tough, capable spin on her aggressive lady cop, Sara. The great and venerable Max Von Sydow effortlessly gives person to Sam. Even the cliche of showing the numbers tattooed on his arm is given dignity by the actor.

"Intacto" is an interesting, well-made intro for its creator with its solid techs, good script and fine acting. Fresnadillo may well be Spain's answer to America's Mamet.