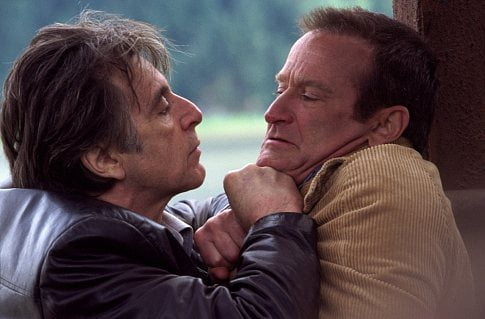 Veteran LA detective Will Dormer (Al Pacino) and his partner Hap Eckhart (Martin Donovan) are shipped, on loan, to the Nightmute, Alaska police department to help the local cops investigate the brutal murder of a 17-year old girl. Will hatches a plan to trap the killer, but an unfortunate mistake by one of the local officers forces a chase after the perp through thick fog. Dormer gets the drop on the guy and fires at the shadowy, fleeing figure. But, it isn't the bad guy he shoots, it's his partner in the American remake of Norwegian thriller in "Insomnia."

When a local teenager is found brutally murdered with all traces of the killer carefully removed, Nightmute, Alaska's Police Chief Nyback (Paul Dooley, "Waiting for Guffman") requests the assistance of old friend, L.A. detective Will Dormer (Al Pacino). Already troubled by his partner Hap's (Martin Donovan, "Portrait of a Lady") plans to cooperate with internal affairs on an investigation which may implicate him, Dormer loses more sleep in the land of the midnight sun in director Christopher Nolan's ("Memento") remake of the 1997 Norwegian film, "Insomnia."

Nolan proves he has the commercial goods directing three Oscar winning actors with Hillary Seitz's Americanized adapted screenplay. This "Insomnia" is bigger and glossier than the original, but the Norwegian version's grittier edge gave more darkness to its sunshine-provoked protagonist.

Will impresses local junior cop Ellie Burr (Hilary Swank, "The Affair of the Necklace"), who studied one of his cases for her thesis, with his ability to sniff out motivation from the victim's surroundings. He quickly discounts her boyfriend Randy (Jonathan Jackson, "Deep End of the Ocean") as a suspect, and gets him to admit she was seeing an older man who could afford to buy her expensive presents. When the young girl's purse is returned to the murder site as bait, the murderer falls for the trap, but eludes his pursuers in dense shoreline fog. He does, however, witness Dormer's accidental shooting of his partner, as well as Will's immediate reaction to pin the killing on him.

After Will tampers with the evidence (which is just what he's under investigation for back home), he soon sniffs out Walter Finch (Robin Williams), a local writer, as the killer. Finch, however, holds Dormer's career in his hands and dances rings around the guilty cop while suggesting Dormer assist him in framing Randy. They both, after all, never meant to kill.

"Insomnia's" marketing would have you believe that Dormer may have really intended to shoot his partner and that Finch uses his murders for book ideas. Neither is the case. While the original "Insomnia's" partner shooting incident was more enveloped in fog, Dormer would be more correctly accused of ineptitude than murder.

Pacino is much more convincing, if more theatrical, in displaying his character's sleep deprivation than Stellan Skarsgard's take on the character, but the Norwegian actor shows more depravity. The twinning of the hunter and hunted, which made the original such a compelling character study, is missing here. Where Skarsgard's character shoots a stray dog to produce his evidence, Pacino merely finds an already dead one. When interrogating the victim's best friend, who was cheating her friend's boyfriend, Skarsgard's Engstrom makes a play for the young flesh while Pacino's Dormer merely shows contempt.

This teeter to the good of the cop is tottered, however, by Robin Williams' performance as Finch. Where the Norwegian killer was more brutish, Williams makes him pathologically smooth, a man who speaks with warm empathy as the ice that runs through his veins melts through his moist eyes. The pairing of Williams' cool to Pacino's hot is beautifully shown off in a scene in Nightmute's police office interrogation room, where Finch outplays Dormer's every move causing the detective to explode in rage.

Hilary Swank is serviceable as the idealistic young cop who acts as the moral compass in the film, but the underrated Maura Tierney ("Scotland, PA") is better as the hotel clerk who becomes Dormer's confessor. Unfortunately, a wild sex scene between cop and clerk in the 1997 film is only vaguely alluded to here. Tierney deserved more screen time.

Director of Photography Wally Pfister ("Memento") makes the most of rugged locations and delivers a clean and crisp look. His initial shot of a small plane flying over jagged, vertical peaks is breathtaking. The pattern is repeated when Will chases Finch over a river of swift-moving logs from a mill and Pfister emphasizes the scene with a diagonally framed overhead shot. This sequence is beautifully edited by "Memento" Oscar nominee Dody Dorn, who pays homage to the climatic scene of "The Silence of the Lambs" in her cutting choices with this film's ending.

Christopher Nolan's "Insomnia" may not keep you awake at night, but it's a stylish police thriller with a combustible pairing in Pacino and Williams.

The interpretation, by novice scribe Hillary Seitz, of the original 1997 screenplay by Nicolaj Frobenius and Erik Skjoldbjaerg of the same named flick starring Stellan Skarsgard contains some subtle tongue in cheek touches that may not be obvious immediately. Detective Dormer, on the case in the land of the unending summer day, suffers from severe insomnia for the days. (It wasn't until the next day that I remembered that the French word dormir means to sleep. You don't see this kind of attention to detail and humor in your average Hollywood script.) The change to an Alaska locale and the reason why LA cops would investigate a murder way up north are not a problem, especially with such talents as Pacino and Robin Williams as the object of Will's pursuit, Walter Finch.

Pacino and Williams are the keys to "Insomnia." Pacino is a great actor and is able to convey the steadily increasing haggardness his character feels as he goes for days without sleep. You can feel the edginess and the sand-in-the-eyes feeling of the exhausted cop as he tries to cope with the constant, unrelenting daylight, sleeplessness and guilt over killing his partner.

Williams continues to pull away from the schmarmy characters he has played in the recent past (think of the gagging treacle of "Patch Adams" and the rank sentimentality of "Bicentennial Man). With his perf in "Death to Smooch" (one of the few good things about that movie) the actor shifted over to the dark side and appears to be on a roll with the latter film, "Insomnia" and the up and coming "One Hour Photo." It's a little strange, almost spooky, watching the man that personified goofy comedy improv and impersonation perform in edgy dramatic roles that are totally out of his normal comedy characters.

Academy Award winner Hillary Swank has not lived up to the reputation that the Oscar conveyed on her as Best Actress ("Boys Don't Cry"). She was outclassed by everyone else in "The Affair of the Necklace" and comes across poorly opposite Pacino. She is supposed to be an idolizing young cop who puts the veteran Dormer on a pedestal, but acts more like a little kid than a cop. The sidebar story of her investigation of Hap's death is necessary but feels tacked on. Swank doesn't have a lot to do, here, and doesn't do anything with it.

Maura Tierney in a tiny role as the innkeeper of the small town is totally effective in a small perf opposite Pacino. Her presence is so prominent in her brief scenes that I wonder what was left on the cutting room floor. I think the actress should have been cast as Swank's character. She could well have given a superior performance. Tierney is under appreciated as an actor, in my opinion.

Techs are fine across the board, especially camera work by Wally Pfister ("Memento"). The film looks great and scenes such as the chase in the fog or across a log-choked river are exciting and different from the routine stuff we normally get from a Hollywood thriller. The exterior shots are outstanding, especially the opening as Will and Hap fly over the snow covered mountains on their way to the investigation.

Helmer Christopher Nolan, on the heels of his tremendously successful indie hit, "Memento," goes mainstream, but his skilled eye and storytelling ability make this a good film in its own right, not just a poor American remake of a better foreign film.