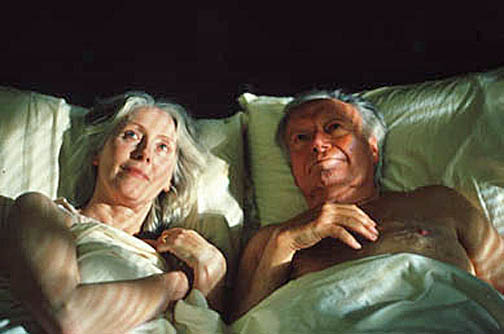 Five decades ago, Andreas (Charles Tingwell) and Claire (Julia Blake) shared a passionate romance in Belgium, following World War II, then went their separate ways. Now, a half-century later, they discover that they live in the same Australian city and it soon becomes evident that their love of so long ago has not faded. Although Andreas is a widower, Claire is married and is torn between her loyalty to husband John (Terry Norris) and the passion she still feels for her former lover in "Innocence."

When widower Andreas (Charles 'Bud' Tingwell, "The Castle") discovers his first love resides in the same Australian city, he writes Claire (Julia Blake, "Hotel de Love") a sentimental letter, begging for a meeting. Claire, married for forty-five years to John (Terry Norris, husband of costar Julia Blake), guiltily meets Andreas for dinner, but states that while it was nice seeing him, there's no reason to stir up old feelings. But Andreas persists in pitching woo and Claire finds herself falling in love again in "Innocence."

Writer/director Paul Cox, who explored middle-aged romance in "Lonely Hearts" and dying with dignity in "A Woman's Tale," combines those themes in this septuagenarian love story. Claire, whose marriage has been sexless for twenty years, initially opts for keeping the current peace. When Andreas is asked to be present at the disinterment of his wife's grave, he asks Claire to come for moral support. She's so moved by his distress and his appeal to stay the night with him, that she decides to celebrate life. Claire also decides that she's too old to lie.

John, a man who hasn't voiced his true feelings in decades, is dumbstruck by his wife's confession of infidelity. He calls in their son David (Robert Menzies), a doctor, hoping for a physical or mental analysis that will explain things. He tries to physically restrain Claire from going out, then tries to woo her back. His delighted surprise at hearing her tell an off-color joke is both touching in the depth of feeling Norris brings to the scene and telling in how little he really knows the woman he's spent most of his life with. Norris gives a powerful and layered performance.

The film belongs to Julia Blake, however, a truly beautiful woman who glows in her rediscovered love. Blake conveys the heartbreak of breaking another's heart while simultaneously expressing the joy of living to the fullest. Tingwell makes Andreas the more Bohemian, worldly choice next to the staid John, but his performance has just a touch of self congratulation about it. Claire tells Andreas, whose strict father came between them all those years ago, that she doesn't think he fought hard enough for her then and Tingwell's portray of Andreas keeps him slightly suspect the second time around.

Cox has written some beautiful dialogue, from reflections on the definition of a memory to Andreas' humorous baiting of a hospital chaplain, although he occasionally meanders into overt melodrama. Reflections are featured visually throughout the film as well, from flashbacks of the young lovers seen in the windows of a passing train to Claire's peering into a mirror (where her younger self dissolves into her present). Overall, however, the film has the look of a British TV production.

"Innocence" stumbles occasionally, but it's refreshing to see senior citizens treated as sexual beings with needs and desires and the ability to light up a room with their presence. You may never see your grandparents in quite the same light again.

Director Paul Cox is known for his artistic portrayals of life, such as that of a lonely, aging voyeur in "A Man of Flowers" and a woman dying with dignity in "A Woman's Tale." With "Innocence" the helmer/writer takes a radically different filmic path with a subject matter - a long parted couple, now aged, and their rekindled passion - that is not the kind of thing one gets from Hollywood. With its theme of senior love, it is the kind of thing that the internationally acclaimed filmmaker would explore, though, and he is moderately successful in his effort. High marks go to Cox for having the gonads to depict life during the twilight years where love and passion are still real.

Using ample, even overused, flashbacks shot with a handheld camera and exhibiting a grainy garishness, we see Claire (Kristine Van Pellicom) and Andreas (Kenny Aernouts), 50-years younger, walking hand in hand, frolicking around Belgium and making mad, passionate love. (Truth be told, the flashbacks are the biggest problem with the film, taking up too much time showing a young couple almost void of any real personality.) This sets the stage for what will happen many years later to the young lovers after they are, seemingly, parted forever.

We come to the present and meet septuagenarian Andreas, whose wife died some 30 years ago and, since that time, he has reminisced about his first love, Claire. When he learns that she lives nearby, he writes to her, almost begging to see her again. Although Claire is married now, old feelings flood back and she agrees to meet with her old flame. Their passions are rekindled and Claire must make a choice between her long-standing marriage and her newly re-sparked relationship with Andreas.

This study in elderly romance is handled with dignity as Cox shifts between the modern-day love affair of Claire and Andreas and the long ago, though not forgotten, involvement when the two were so much younger (but, definitely, not more impassioned). The story segues between the quiet, loving romance of the elder couple and the more energetic ardor when they were young. The present-day interlude, as the couple beds down together after half a century apart, is handled with sensitivity as the camera lingers over their quiet loving that still has the fire (though a bit more slowly generated) of their younger years..

Cox kicks it up a notch as he throws Claire's marriage into the mixture with she and husband John coping with their side of this aging love triangle. Married for over 40 years ("44 years, 3 months and 6 days," Claire informs John), there has not been a physical relationship between them for two decades. When she drops the news of her newly awakened desires for Andreas, John, at first, simply doesn't believe it, then, as the reality sinks in, is angered, hurt and confused. Claire decides to accept the consequences of her action and a tense truce is arrived at, but not before John sends his physician son David (Robert Menzies ) to find out what's wrong. Meanwhile, the widowed Andreas confides his feelings to his incredulous daughter, Monique (Marta Dusseldorp), and garners her support.

Julia Blake takes charismatic hold of the screen as the still beautiful Claire. The actress is the one in charge here as Claire is the one who makes the decisions concerning her life and those of Andreas and John. Blake has regal good looks and comes across as attractive and a convincing object of desire for both of her men. Blake's real-life husband Norris gives a solid tragic/comic performance as movie husband, John, who is torn between maintaining the failing status quo of his marriage and the desire to keep his wife, no matter what the cost. Charles Tingwell (one of the heroes in the wonderful Aussie comedy, "The Castle") is two dimensional, at best, and acts mainly as the catalyst for the changes that are to be visited on the three senior citizens. The limited supporting cast helps to give some depth to the background, but the focus is on the three principles throughout the film.

There is a staginess to the proceedings that gives the film a static, TV-like look that is more suited to the small screen. If an actress of a lesser caliber than Blake were the focus of the film, I'd say that it should go directly to television. Her performance, though, is worth the price of theater admission. The subject matter is so fresh and untrammeled it begs to draw in more mature audiences to this sweet, melancholy story of love at the end of life, though I doubt that you'll see it at the local multiplex. "Innocence" travels ground that is rarely seen on the screen and is handle with sensitive care