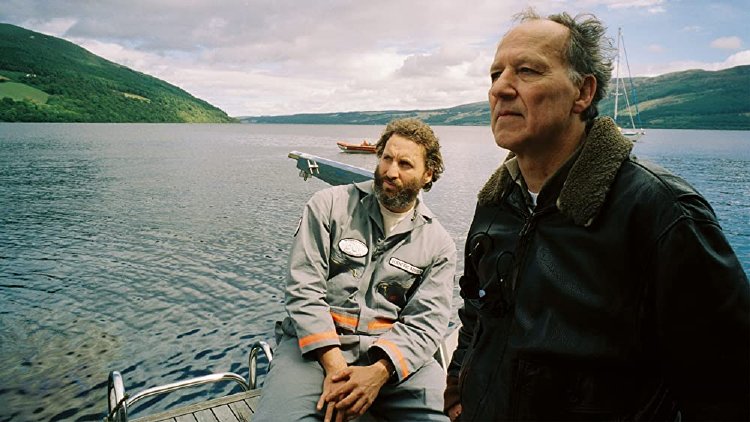 Legendary German adventurer/director Werner Herzog ("Fitzcarraldo," "Aguirre: The Wrath of God") allows enthusiastic screenwriter/producer, Zak Penn ("X2," "Suspect Zero") to produce his latest documentary, an investigation into the human need to believe in dark and mysterious phenomena. Handing over the production reins doesn't relieve but creates headaches for the director, though, and his film is literally upended by a tragic "Incident at Loch Ness."

When the trades announced last summer that Werner Herzog was off to Scotland to make a documentary called "The Enigma of Loch Ness" I couldn't have been happier. Here was one of my favorite filmmakers going to my favorite spot in the world to offer his unique perspective on an eerie, romantic myth. But once I'd seen the humorously dramatic trailer, I knew I'd been punk'd! Ready to go with the flow and see Herzog have a little fun, I was disappointed yet again, as writer/director Zak Penn can't make up his mind whether he's making a comedy or a creepy "Blair Witch" style mocku and so delivers neither.

The film begins promisingly with veteran cinematographer John Bailey ("American Gigolo," "The Big Chill") making a 'making of' documentary (on the documentary within the mockumentary) called "Herzog in Wonderland." Herzog invites us inside his home where he's preparing a dinner for a party that evening. He shows us mementos from his films, such as a native Indian arrow coated in anticoagulant from "Fitzcarraldo," discusses the exacting preparation of yucca root and the idea for his latest film. (Why are only Americans abducted, Herzog wonders - and why are they mostly extremely overweight women who are not only abducted but gang-raped by aliens?) The dinner party itself is an intriguing blend of "Enigma" collaborators (producer Penn, Mexican cinematographer Gabriel Beristain ("S.W.A.T.")) and Herzog cronies Jeff Goldblum, Crispin Glover and card-trickster Ricky James. The first sign of trouble is introduced when Beristain begins talking about lighting and special effects, only to be hushed up by Penn in exaggerated fashion.

Herzog's preparations for his trip are highlighted by an amusing conundrum involving mismatched shaver handles and safety blades. 'Why are you filming this banality?' Herzog asks Bailey before admitting 'filmmaking is a chain of banalities.' In Scotland, Herzog is faced with a production coordinator, Robert O'Meara, who wants to refocus the director on the area's economic troubles and a 'sonar operator' who is really a Playboy model (Kitana Baker) hired by Penn for some T&A. Penn's bad calls add up until the production has lost its cinematographer and sound mixer (Russell Williams), the locals are furious over the filmmakers' hoax and the renamed Explorer IV is dead in the loch with something large and angry harassing it.

Penn's idea was a good one, but the first time director allows his cast to pursue wildly divergent performance styles. Herzog himself is terrific playing it straight, thereby delivering some of the film's biggest laughs, but too many others either go for broad comedy (Penn himself) or show their inexperience in front of the camera (Beristain, Baker). Penn's writing is also uneven. For every bit of believable skullduggery (the producer's insistence on 'official' 'expeditition' jumpsuits, Captain David A. Davidson's superstitious unease regarding the renaming of his boat), he goes over the top (cryptozoologist Michael Karnow's general quackery and loony laundry habits, trying to convince Herzog to film a papier mache Nessie head, a climax ripped off from "Jaws"). Penn's best bit is a reversal of a mythic story involving Herzog directing Klaus Kinski with a loaded pistol, something Herzog vigorously denies before taking the piss out of it. Special effects are nicely done, but by the time Herzog dons a wetsuit to jump into the loch, the laughs may still be with the star, but they're also aimed at the director.