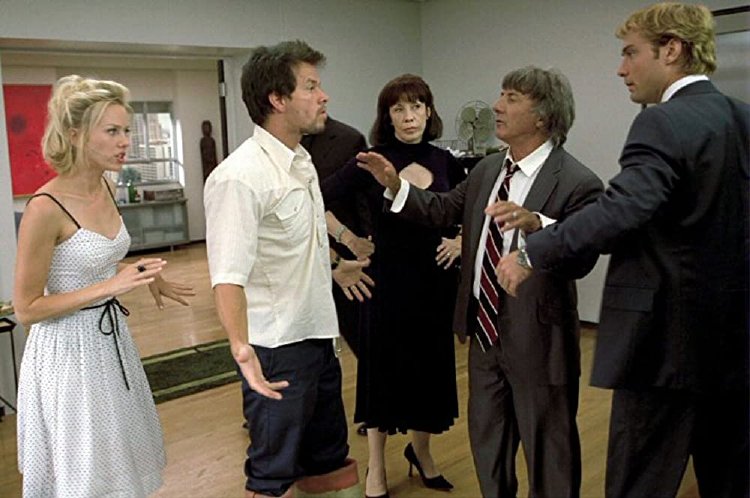 Cowriter (with Jeff Baena)/director David O. Russell ("Three Kings") appears to be looking for entry into the quirky auteur circle of Paul Thomas Anderson, Charlie Kaufman and Spike Jonze, but flights of existential fancy are not his strong suit and "I Heart Huckabees" is an airy comedy stuffed with entertaining performers saying little in rat-a-tat-tat rushes of dialogue.

For some unexplained reason, Albert finds three run-ins with the same tall Sudanese refugee a reason to ponder the meaning of life. The added coincidence of finding Vivian and Bernard Jaffe's business card in a borrowed dinner jacket sends him to their door (after wondering through mazelike plain white corridors right out of "Punch-Drunk Love"). Lily informs him that she will be observing him throughout his day and Bernard uses a blanket to demonstrate how everything is the same.

Albert is an environmentalist who believes that his bad poetry ("You rock, rock") is the way to move the masses, whereas ambitious exec Brad sees good PR for Huckabees, a department store chain that marries Target with Howard Johnson's color schemes which plans to build in the marshland Markovski is determined to save. Albert's escalating trauma make the Jaffes pair him up prematurely with his 'other,' firefighter Tommy Corn (Mark Wahlberg), but Tommy's already questioning the Jaffes beliefs and Brad's usurpation of Albert's coalition drives him into the arms of the Jaffes' fallen angel Vauban. Vauban has a more nihilistic view of life, believing that nothing is connected and that it does not matter what you do.

In the end, Russell brings his dueling philosophies together, determining that life is just one big gray area - everyone is searching for something and whatever answer suits one at the time is as meaningful as its opposite. Yet, despite this muddled attempt at some kind of existential relevance, "I Heart Huckabees" works on an absurdist comedy level, albeit in fits and starts, due to its unusually mixed ensemble. Mark Wahlberg is stellar as a man struggling with his kind's responsibility to the planet, ready to lecture on the misuse of petroleum with the tiniest provocation. The Wahlberg/Schwartzman pairing is brilliant and the two actors play off each other beautifully, especially employing Vauban's 'pure being ball thing' technique in which the two knock each other almost senseless with a big red ball. Another high moment finds the duo laying waste to a family dinner when they are invited to the Hootens' supper table by their adopted Sudanese lost boy. Talia Shire, Schwartzman's real mother, appears as the mother who may have scarred him for life by giving priority to an inane social obligation over the death of her son's cat.

Jude Law is pure American hucksterism, giving a surface performance until he's faced with the shallowness at his core. It's a screwball piece of acting unevenly matched with Naomi Watts' perky take on the film's most problematic role, that of a model whose spiritual search is satisfied by donning an Amish bonnet.

Tomlin melds her prior sleuthing experience in "The Late Show" with her own "Search for Intelligent Signs of Life in the Universe" to spin the more grounded Jaffe partner while Dustin Hoffman lets go of all of his usual actorly tics to happily float as the Magritte-loving optimist in a salt and pepper Ramones do. Huppert is well cast as their dour counterpart, but her literal wallow in the muck with Schwartzman falls flatter than a mudpie.

David O. Russell begin filmmaking life with his off-beat incest comedy, “Spanking the Monkey,” then went on to his journey of search and discovery of one’s roots in “Flirting with Disaster.” He shunned his independent feature roots when he took on the Hollywood big budget Gulf War (the first one) epic with “Three Kings.” Russell returns to his indie film days with an existential detective comedy that tries to answer the questions of life in “I Heart Huckabees.”

Albert Markovski (Jason Schwartzman) is the poetry-spewing director of the environmentally conscious Open Spaces Coalition and is doing his part to save the fast dwindling local rural environment. The intense character experiences a series of coincidences” when he repeatedly runs into Steven Nimieri, dubbed “the African Guy (Ger Duany), for no reason.” Another coincidence occurs when Albert goes to a swanky restaurant and must wear the provided sports jacket. In the pocket he finds the business card for Vivian Jaffe, Existential Detective, and contacts her for help in explaining the chance meetings with Steven.

Vivian introduces Albert to her husband and partner, Bernard Jaffe (Dustin Hoffman), and the pair of ethereal gumshoes invades the young man’s life. Their plan is to dismantle Albert’s life, and the fear it contains, and show him “the blanket truth” that links everything in the universe together. To these nutty detectives, there is no coincidence - everything is linked together, somehow.

Meanwhile, Albert’s position in Open Spaces is being challenged by Brad Stand (Jude Law), the handsome, ambitious, corporate ladder-climbing exec in the giant department store conglomerate, Huckabees. Their conflict builds quickly when Brad hires the Jaffe’s for his own dismantling. This conflict of client interest draws the attention of the detectives’ former protégé and now opponent, Caterine Vauban (Isabelle Huppert), who spouts a philosophy of disconnect diametrically opposed to the Jaffe’s.

I Heart Huckabees” is an enigmatic film that wears its philosophical heart (pun intended) on its sleeves while steeping itself in a great deal of silliness. The tongue-in-cheek dialogue is voiced with an earnest fun that keeps things low-key but tense. Albert is an excitable idealist who is the antithesis of his rival, the coolheaded and pragmatic Brad. But, they are really two sides of the same coin and the plotting Brad begins to see his own life really is in need of dismantling.

The cast of “Huckabees” is better than the material they are given. Jason Schwartzman gives his Albert an angst-ridden persona that desperately needs answers to his deep questions. Albert’s sudden, frustrated swear-laden outbursts are just the tip of the iceberg of his frustration with life. Dustin Hoffman gives a deadpan performance as the philosophizing detective with all of the answers to Albert’s questions, at least in the detective’s mind. Lily Tomlin gets mileage out her intensely low-key performance that would put her in good stead with Jack Webb in the old Dragnet” TV series. Jude Law has fun with his Brad and uses his handsome looks and winning smile to good, if underutilized, effect. Isabelle Huppert flashes her saucy Frenchness as the opposition party. Naomi Watt does not show the stuff she displayed in her American debut, “Mulhulland Drive,” though her role as the spokesperson for Huckabees feels like an add on. Mark Wahlberg gets the most out of his working class fireman, Tommy Corn, who has eschewed fossil fuels and bicycles to his firefighting assignments. He and Schwartzman spark a good deal of male-bonding chemistry.

David O. Russell doesn’t seem to know where he wants to go with his career if you take “I Heart Huckabees” as his next step in filmmaking. The success and budget of “Three Kings” appears to have given the helmer a taste for bigger things – the prestigious cast for the silliness of “Huckabees” is an indication – but wants to get back to his roots. I’m not sure he can have it both ways and the result is a sometimes amusing, mild mannered philosophical comedy that is, in the end, shallow.