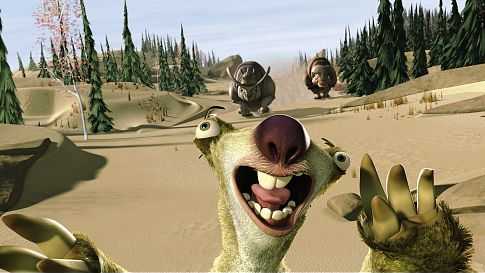 Twenty thousand years ago, as climate changes thrust the northern regions of the earth into a frigid, endless winter, creatures of all shapes and sizes migrated to the warm safety of the south. A giant wooly mammoth, named Manny (voice of Ray Romano), eschews the migration, as does a lazy sloth named Sid (voice of John Leguizamo) that tries to be buddies with the prodigious pachyderm. When the life of a human baby becomes their responsibility, they go against their very nature and trek the frozen land to bring the child home in "Ice Age."

Wooly mammoth Manny (Ray Romano, TV's "Everybody Loves Raymond") is trekking south when he spies a sloth in a scrape. After taking on a couple of rhinos to save Sid (John Leguizamo, "Moulin Rouge"), the usually solitary beast can't shake off his grateful companion. Meanwhile, saber-toothed Soto (Goran Visnjic, "The Deep End") is getting revenge on a human 'herd' by targeting baby boy Roshan for breakfast, but a brave mother thwarts him. Right hand tiger Diego (Denis Leary, "Final") is sent to rectify the situation, but finds Manny and Sid planning to return Roshan to his people in "Ice Age."

Academy Award winning director Chris Wedge, whose Blue Sky Studios produced the digitally animated short "Bunny," doesn't break any new ground with his prehistoric comedy, but scores on the old-fashioned merits of entertaining characters in a simple story interspersed with Wile E. Coyote-style mayhem. "Ice Age" may recall "Shrek" with its giant beast pestered by unwanted companion and "Monsters Inc." with its baby returning plot, but it's not up to those films' standards. Still, this is a cute flick with charms of its own.

Diego sizes up the unexpected turn of events as an opportunity to make Soto doubly impressed - not only will he deliver Roshan, but he'll guide the mammoth into an ambush of salivating saber tooths. Diego makes nice and soon Roshan finds himself with an odd trio of male guardians, a plot outline used from John Wayne Westerns to French farces. The three have adventures ranging from stealing a melon from a pack of idiotic, self-extincting dodo birds to a wild slide through a glittering glacial tunnel. Of course, they bond, with Diego having a change of heart after his life is saved by a particularly selfless and courageous Manny.

The artistry of the animation is almost entirely focused on the characters. Manny's marble eyes convey a wide range of emotion while Sid's cartoonish contortions are always sloth like. Humans are drawn more simply, resembling modern renderings of vaguely Neanderthal American Indians. Backgrounds and landscape are pretty drab in comparison, although an animated cave drawing which explains Manny's melancholy is nicely done. Blue Sky's best creation is Scrat, a prehistoric squirrel-rat whose efforts to bury his precious acorn are woven in and out of the main storyline as well as bookending the film.

Casting and voice work is spot on, with the unusual choice of Romano working surprisingly well for the majestic loner with a big heart. Leguizamo injects a bit of 'sufferin succotash' spit and sputter into Sid's spewings while Leary tames his usual roar with some smooth smokiness for the two-sided tiger.

Oscar winning director Chris Wedge (for the animated short, "Bunny") takes the tried and true three-men-and-a-baby story, with specific ties to John Ford's "The Three Godfathers," and pits Manny, Sid and a sinister saber-toothed tiger named Diego (voice of Denis Leary) against the elements and more to save a little baby. An attack on the sleeping human camp by a pack of tigers forces the mother of baby Roshan to flee to protect her helpless child. She escapes, but at the cost of her own life. In her last, dying effort, she thrusts her little bundle into the trunk of Manny - human and mammoth, for a very brief moment, join minds on Roshan's safety.

Manny and Sid vow to return the baby, now dubbed Pinky, to the human herd and set out across the bleak landscape in their quest. They are joined by an unlikely helper, Diego, who says he can show them a shortcut to the humans. (Diego, we know, has a hidden agenda made by his leader, Soto (voice of Goran Visnjic), to bring back the human child as a special, tasty morsel, with a stack of mammoth burgers as additional incentive.) In true buddy/road movie, the trials and tribulations the odd little herd must face brings them close together, so much so that even Diego foregoes his blood kinship with Soto and the other saber-tooths for the protection of his adopted herd.

The screenplay, intentionally or not, does cover the same ground (with frozen tundra replacing blazing desert) as Ford did in his 1948 classic starring John Wayne. (There is a lot of similarity, now that I think of it, between Manny and the Duke.) The three prehistoric amigos replace the western characters, but their mission is still the same - to get Pinky back to his herd. Along the way, they must deal with ornery Rhinos with a grudge against Sid, poopie diapers, Diego's blood-lusting clan, and a gang of you'll-understand-why-they-became-extinct Dodos. A side story about a solitary prehistoric squirrel/rat/raccoon named Scrat (although the rodent doesn't talk, director Chris Wedge gives the little critter a distinctive, amusing sound to go with the Wile E. Coyote-like characterization), with his efforts to bury his precious acorn, to catastrophic ends, is an amusing thread that the kids seem to love. Scrat is, if anything, the familiar icon for the flick and his efforts are bookends in the film.

Vocal talents aren't stellar, but they are provided by a bevy of known actors, all of who provide fine voice. Ray Romano's laconic delivery perfectly suits the slow, deliberate lumbering movements of Manny. Sid, giving, by Leguizamo, a "thufferin' thucotash" sound akin to Sylvester the cat, is reminiscent of Art Carney's Norton in "The Honeymooners" TV show - Manny, too, comes across strongly as the Ralph Cramden type foil to Sid. Denis Leary gives the sleek, sinister voice of Diego a hissing quality, but puts nuance into his character as Diego bonds with his oddball herd. Other actors, such as Jack Black, Cedric "The Entertainer" and Stephen Root, give voice to the other critters the heroes come across.

The animation of all the creatures fleeing the frozen north for warmer climes, and our heroes, gives them a stuffed animal, artsy quality that keeps your eye from looking for the mistakes - "realistic" animation, like "Dinosaurs," comes under the scrutiny of the dino fans for accuracy and the makers of "Ice Age" avoid this analysis by forsaking accuracy for art. By giving Manny and Sid a cuddly quality makes this a pretty sure bet with the younger kids. The humans are drawn as a strong-featured, noble folk of budding intelligence. The production design, by Brian McEntee, doesn't strive for the realistic backdrops that the mark other CGI animation efforts such as "A Bug's Life," where attention focused down to the individual blades of grass. Instead, a stark, frigid background depicted in the sharp angles of steep, snow-covered cliffs is used to contrast, and bring out, the little troupe of mammals struggling to bring little Pinky home - Pinky (voice of Tara Strong) is a cute little guy and deserves to be saved.

The sweet story of three mammal's quest to return a baby to his clan may be slight, but it is very entertain for kids of all ages. There is enough cute to suit the younger kids and enough intelligent humor and visuals to keep the adults interested. It is not of the same knock out caliber of "Shrek" or "Monster's, Inc." but "Ice Age" packs a respectable punch of its own.