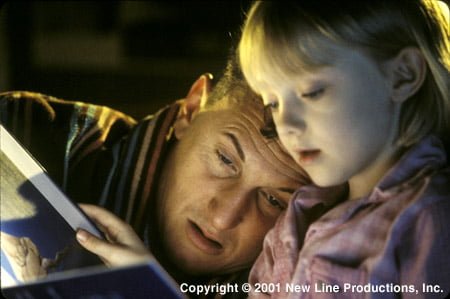 Sam Dawson (Sean Penn) is a working adult with the IQ of a 7-year old. When he befriends a homeless woman, gets her pregnant and is abandoned, he is left with a baby girl to raise alone. Seeing Sam's predicament, a kindly reclusive neighbor, Annie (Dianne Weist), teaches him about the mysteries of child rearing and he, with the help of his best friends, raises a pretty nice little lady. But, Lucy Diamond is passing her dad by, intelligence-wise, and the precocious little girl comes under the scrutiny of the child welfare system in "I Am Sam."

The story (by helmer Jessie Nelson and Kristine Johnson), after an extended sequence showing Sam and his support group lovingly raising and nurturing the growing Lucy, has the supposedly responsible child welfare bureaucrats taking a hand in the girl's upbringing. Because little Lucy has surpassed her dad's IQ, the system deems Sam unfit to continue raising his daughter. But what does that say about a system that blithely permitted this same childlike adult to care for this same little girl through her most formative years. It would seem that the same support system - the network of friends who also help care for Lucy - would continue to work. This kind of forced story line, and the bits where Sam cuts cute, hurt the integrity of the heartfelt little tale of mutual love between father and daughter. About the cute: there is one sequence where Sam is unwittingly solicited by a prostitute and arrested. He should be terrified, like any seven-year old, but the filmmakers play it for the laugh instead. It is a missed opportunity and there are others that take the edge off of "I Am Sam.".

Sam and his buddies do the research to find a lawyer to help get Lucy back and select the high-powered, very expensive talents of attorney Rita Harrison (Michelle Pfeiffer). The overworked, stressed out lawyer almost laughs at the idea of taking Sam's case until her disdainful colleagues silently badger her into taking up Sam's cause pro bona. The film shifts gear as the lovely little Lucy Diamond is taken out of the picture and Rita, in all her compulsive-obsessive glory, becomes the focus of Sam's attention. Of course, despite all her wealth, beauty and career, Rita is a basket case herself. She is so busy with her ambitions she has lost her grasp of her marriage and, worse, the affection of her son. Her plight is a tip off to where this yarn is going - the chance meeting with Sam will change her life in an affirming way. Fortunately, Lucy returns to the scene for the heartfelt last quarter.

Acting ranges from dependable to first-class, especially Penn and the adorable Dakota Fanning. There is bound to be comparison made to Dustin Hoffman's portrayal of the mentally challenged Raymond in "Rain Man" and there is, sometimes during "I Am Sam," reason for this. Hoffman has a virtual patent on saying "yeah" so Penn's use of that word takes on a mimicking quality. Beyond that, though, it is a studied performance that makes Sam really come across like a seven-year old, but a very responsible one. It is not his best work but it does show the dedication Penn has to his craft, even with a schmarmy story like this one. Hitherto unknown Fanning makes a spectacular debut and is the best thing about "I Am Sam." There is an assuredness about her and the ability to look you, the viewer, in the eye and convince you that she is Lucy Diamond. Her natural performance speaks of a maturity not often seen in a 7-year old. The only other kid stars I can remember who had this kind of impact right off the line is Haley Joel Osment in the otherwise unmemorable "Bogus" and Tatem O'Neil in "Paper Moon." This is high praise indeed and I look forward to seeing more of this youngster.

Michelle Pfeiffer is one of the most beautiful women in Hollywood (but, please, Michelle, put on a few pounds. You make Calista Flockhart look like a heavyweight). She gives a forced performance as Rita in a way that draws attention to her little-more-than-annoyed-all-the-time persona. I never felt that this lady would be considered a legal shark and Pfeiffer doesn't stretch. Supporting cast is more than up to the task of surrounding Sam and Lucy with a band of loving friends. Doug Hutchinson ("The Green Mile") plays movie savant Ifty, Sam's best, best friend and de facto leader of the mentally challenged single dad's cronies. Lending authenticity to the band of friends are challenged actors Brad Allan Silverman and Joseph Rosenberg. Veteran character actor Richard Schiff is solid as prosecuting attorney Turner. Weist is underutilized as the helpful, observant neighbor Annie and Laura Dern, poor thing, is little more than a plot device to aid in the requisite happy ending.

There is a great deal of affection and admiration for the Beatles, both collectively and individually, with numerous covers of some of the best of the Fab Four as well as many visual references - including the obligatory riff on the Abbey Road album cover. It is a nice homage to the great band, particularly at a time when the quiet Beatle has just passed. Rita says, at one point, "George was always my favorite Beatle." He was for many others, too. The makers are obvious dedicated fans and they wear it proudly on their sleeves. The covers are done by a who's who collection in the music business, including Nick Cave, Sarah McLachlan and Sheryl Crow.

Technically, my biggest criticism is the predominantly hand-held camera work by lenser Elliot Davis. The jerky, often-blurred photography is supposed to be hip and artsy but is just annoying. The rest of the production is straightforward but the product placement is rampant and shameless throughout the film. Starbucks, IHOP, Target and a slew of other marketing items get prominent airtime, sometimes to distraction.

"I Am Sam" is loaded with inspirational messages. Intelligence, alone, does not qualify someone as a good parent. Rita, through her relationship with Sam and Lucy, learns that her high-powered, pressure-driven life has not only taken its toll on her, her marriage (to a faceless, unfaithful husband) and her young son. As she sees the beauty of the unquestioning love between parent Sam and child Lucy (and vice versa), she begins a change in herself that will be best for her and her boy. In a post-Reagan society where the public institutions released a slew of people who really needed care, Sam is shown as responsible and capable of caring for Lucy. He needs help - but even non-challenged people do, too, it is said - and, between public, private and personal assistance, he proves very able in taking his daughter into adulthood. In the meantime, they enjoy each other's love and happiness.

"I Am Sam" is obvious in the buttons it tries to push. Penn may get criticized but shows, again, he is one of America's great actors. Dakota Fanning is worth the price of admission.