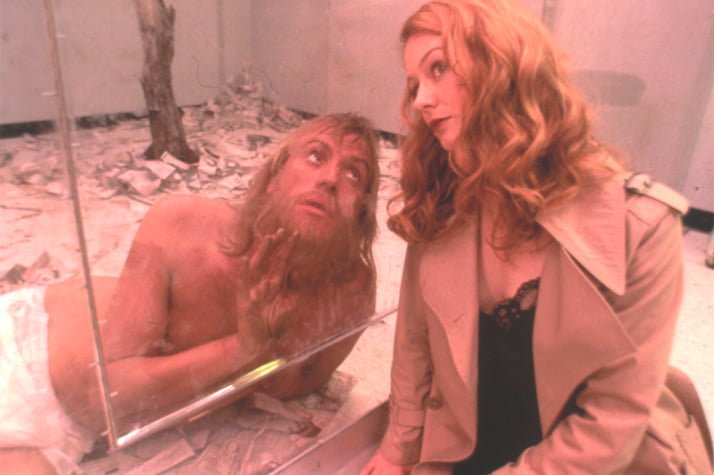 Lila's (Patricia Arquette, "Little Nicky") excessive hair growth drove her to live in the wild, but her sexual urges drive her back to civilization where an electrolysist (Rosie Perez, "Riding in Cars with Boys") fixes her up with repressed behavioral scientist Nathan Bronfman (Tim Robbins, "Cradle Will Rock") in "Being John Malkovich" scribe Charlie Kaufman's "Human Nature."

'Sex-appeal is the keynote of our whole civilization.' - Henri Bergson

If Kaufman kept Cameron Diaz a prisoner in a cage with her ape, in his latest, he'd have them mate. "Human Nature" explores the idea that everything is driven by sex and human's routinely transform themselves into something they are not in order to get it.

Nathan Bronfman is clearly the product of his starched, hen-pecked dad (Robert Forster, "Diamond Men") and his straight-laced, disciplinary mother (Mary Kay Place, "Citizen Ruth"), who commonly sends her son to bed without supper for his lapses in dining etiquette. The adult Nathan is obsessed with teaching table manners to mice via shock therapy.

While he can't resist criticizing Lila for not using her salad fork, he does enjoy sex with her and falls in love. One day as they're out hiking, they come across a feral man (Rhys Ifans, "Notting Hill"). Against her instincts, Lila assists Nathan in 'civilizing' the beast, named Puff by Nathan's French patootie lab assistant Gabriella (Miranda Otto, "What Lies Beneath"). But it's not until Puff witnesses Nathan's seduction at the hands of the duplicitous Gabriella that he decides to cooperate, as he 'wants himself some of that.'

Arquette makes her predicament affecting, but Lila's a bit too earnest. She's best in a hilarious musical number where she walks along a backscreen projection of forest while rhyming diabolical with follicle. She plays a good percentage of the film naked but for some extra body hair and it's refreshing to see an actress who's not emaciated bare a beautiful body. Robbins seems to be recycling a performance from another film and doesn't make Nathan interesting enough to warrant the attentions of two attractive women. He's most amusing missing the completely obvious in the office of his psychiatrist. We're given Nathan's version of events from the post-death purgatory he's trapped in - a completely white copy of his mother's dining room. Ifans is hilariously droll as Bronfman's Eliza Doolittle, sitting in his Lucite lab learning how to use opera glasses or out in a restaurant getting electric shocks for dry-humping the waitress. Speaking before a congressional committee, Puff states 'in retrospect, I'd have to say I was a pygmy chimp' before perfectly adjusting his profile to match the chimp's picture.

Otto plays the most inexplicable character, although Gabriella is a complete concoction designed to lure the opposite sex, ironically portraying the most radical example of the film's theme. Rosie Perez is delightfully warm and supportive as Louise and makes a beaut of a feminist stance at film's end, along with her midget boyfriend.

Technically, the film is very inventive, with director Gondry mining his music vid experience to create a fantastical environment for his unusual characters. "Human Nature" boasts the best blend of live and animatronic mice since "Babe." But "Human Nature" just never takes wing and to flies to the giddy heights it needed, instead remaining earthbound in obvious notions.