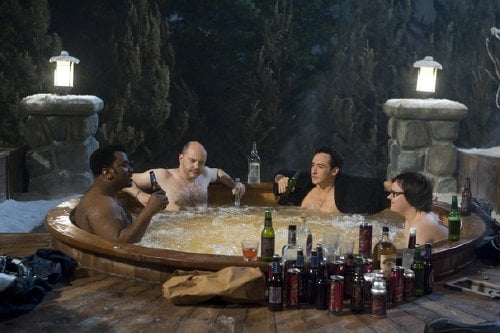 Three buddies, lifelong friends, have not fared too well since their heydays in 1986. Adam (John Cusack) is going through a very bad breakup, Nick (Craig Robinson) works at a mall pet grooming shop and Lou (Rob Corddry) still thinks he is a real party animal. (He is not.) Hoping to regain some semblance of their high-spirited youth, they journey to that place of fondest memory – Kodiak Falls. However, you cannot turn back the clock, can you? The answer is yes if you happen to have a “Hot Tub Time Machine.”

Adam's (John Cusack) live-in girlfriend has just left him and his nerdy nephew Jacob (Clark Duke, "Sex Drive") never ventures from his computer in the basement. Nick (Craig Robinson, "Pineapple Express") has abandoned his musical dreams to schlep at S'Up Dawg grooming mutts while his wife Courtney (Kellee Stewart, "Guess Who") cheats on him. But they're all doing great compared to the friend they haven't talked to in years. Alcoholic loner Lou's (Rob Corddry, "Harold & Kumar Escape from Guantanamo Bay," "W.") suicide attempt brings them all together and they decide to get their mojo back with a trip to Kodiak Valley, the site of their teenaged potential. They get to actually revisit their youth when an illegal Russian Red Bull turns their hotel room's iffiest feature into a "Hot Tub Time Machine."

Producer/star John Cusack revisits the type of films he started out with, given a 'modern' edge with plenty of pushing-the-limits gross-out humor by screenwriters Josh Heald and the "She's Out of My League" team of Sean Anders & John Morris and directed by Steve Pink ("Accepted") with a retro air of sloppy cheesiness. Cusack, Robinson and especially Corddry throw good taste and decorum to the winds as the hedonistic time travelers and the stunt casting of Crispin Glover ("Alice in Wonderland 3D") as a one-armed bellboy provides a deliciously sick running joke, but the film never reaches above a frat boy level of humor. "Hot Tub Time Machine" is just about everything its title suggests. And more. And less.

The foursome arrive to find their old haunt, Silver Peaks Lodge, a broken down dump, but that's nothing enormous amounts of drugs and alcohol won't fix. After a night carousing in the hot tub, they take to the slopes, but things start to feel creepy at the bottom of the hill. Everyone's attired in retro garb, the ski safety instructor, Blaine (Sebastian Stan, TV's "Kings"), looks awfully familiar to Lou, and Ronald Reagan is playing 'Live' on a clubhouse TV. When Nick asks someone what color Michael Jackson is, the answer terrifies him. Sure enough, back in room 420 their old carving at the bottom of a drawer is gone and a flyer for Winterfest '86, the occasion of their last visit, is in its place. Then Lou looks in a mirror. The three middle-aged guys are twenty-five years younger. Nick looks like Kid 'n play and Jacob, who's been sparring with Lou through the entire trip, is wavering in and out like a weak TV signal.

Just as their freakout really begins, along comes a hot tub repair man (Chevy Chase) with cryptic advice and a vanishing act, but the boys deduce that they must retrace their steps in order to avoid the 'butterfly effect.' And so, Adam must break up with his superhot girlfriend Jennie (Lyndsy Fonseca, TV's "Desperate Housewives") and get stabbed in the eye with a fork for his trouble, Nick gets another night of on stage glory and Lou gets to be beaten up by Blaine and his posse. Meanwhile Jacob's unnerved to run into his slutty mom, Adam's sister Kelly (Collette Wolfe, "Observe and Report"), who's intent on partying and scoring a ski instructor.

Of course, nothing really goes as planned. Adam meets a cool Spin Magazine reporter, April (Lizzy Caplan, "Cloverfield"), who's set to disappear Cinderella style on a band bus in two hours. When a football game comes on in the sports bar, Lou realizes there's money to be made in knowing the future and Nick's so high from his band's reception he introduces some Black-Eyed Peas into the mix. It seems only Jacob is intent in getting them all back into the hot tub before they're stuck permanently in 1986.

The humor is seriously low brow, which is not to say some of it isn't pretty funny. For every bit involving projectile vomiting or dog poop, there's a grossout gag that works, like the sight that meets Nick's eyes in a men's room after losing a serious bet, a one-up on Cameron Diaz's 'hair gel,' or the seriously sick phone call Nick makes to his wife, nine years old in 1986. The suspense around the now two-armed bellboy's imminent amputation is the movie's best joke, although Chevy Chase's throughline isn't as effective. There are small throwaway sight gags and, of course, the pleasure in seeing Cusack back on skis acting juvenile ("Better Off Dead" anyone?). The drunken sights spinning around in the hot tub as it passes through time are goofy amusements too, although one wishes the filmmakers were more careful with their time line - there was email in 1986 for example.

"Hot Tub Time Machine" isn't on the level of last year's "The Hangover," but for some sheer cheesy silliness, and a weird kind of nostalgia it'll do just fine.

Touted as better than last years comedy blockbuster hit, “The Hangover,” “Hot Tub Time Machine” has some pretty big shoes to fill. The latter is one of the best laffers (if not THE best) of the decade and the pretender to that throne has too little feet. It is not that HTTM is not funny. It has chuckles throughout and an occasional laugh poking fun at the 1980’s, but does not elicit the guffaws of great comedies.

The magic of going back in time in the titular device is a clever one-note premise but not one that can sustain hilarity. Amusing moments, as when the trio, with their sidekick, Adam’s teen nephew Jacob (Clark Duke), tagging along, look in a mirror in 1986 and see themselves as they looked then. Sophomore director Steve Pink retreads that old tire – if you go back in time, you cannot change anything or the results in the future will be catastrophic. HTTM says “no way” and the hijinks ensue to the happily ever after ending.

The cast appear to be having fun coping with the trials and tribulations of going back in time and seeing the world from a completely different viewpoint. The story, by Josh Heald, Sean Anders and John Morris, is clichéd but gets mileage out of the many absurdities and trends of the mid-80’s. Nick, at one point, and not believing they went back to 1986, stops a young woman and asks her, “What color is Michael Jackson?” Her answer spawns an amusing slapstick breakdown well played by Robinson.

I wish that HTTM did have the big feet claimed but it does not. Wait for it on rental or Video On Demand; it will not be long before it shows up there.