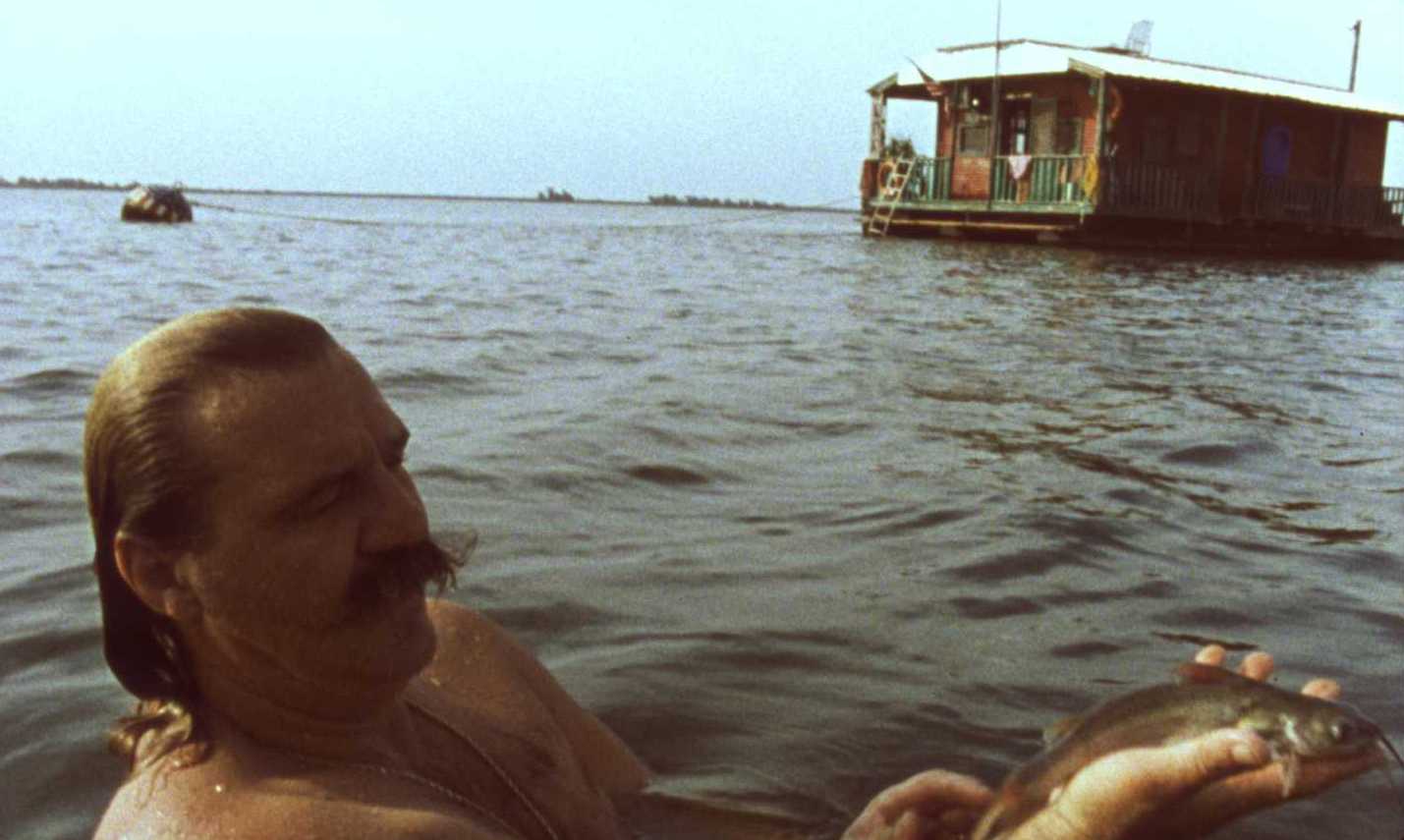 Documentary filmmaker Chris Smith brings us a unique look into five American homes that are as diverse as the people who own them and the country in which they reside in "Home Movie."

A Louisiana houseboat, an all electronic house in Illinois, a converted missile site in Kansas, a California ranch converted for a dozen cats' comfort and a Hawaiian tree house are five unusual homes showcased in "Home Movie."

Director Chris Smith ("American Movie") shuttles among five owners giving far from the typical 'house tour,' before delving into the equally strange backgrounds that compel these people to live in their odd surroundings. While there are some links among the group, the five don't maintain equal interest nor does the filmmaker succeed in finding a unifying theme.

Perhaps the most normal of the bunch is Bill Tregle, an alligator farmer/wrangler whose 25x32 foot houseboat, like his living, is more an offshoot of his exotic geographical environment in the Louisiana wetlands than any eccentricity on his part. We take a huge leap visiting Ben Skora, a man whose obsession with home gadgetry cost him his wife and gained him the companionship of a much young self-proclaimed 'actress.' Equally odd are a Kansan couple whose hippy sensibilities would seem at war with their formerly hawkish missile launch surroundings. We never get a really good look at the home of a reclusive cat couple, perhaps because of the difficulty of filming in what appear to be close quarters, although we are informed that the $10,000 they spent on renovations also cost them 30% of their home's resale value. Linda Beech at first seems more remarkable for being able to climb up to her Hawaiian aerie at an advanced age than for having dreamt up the concept.

Smith finds an explosive connection, with Fourth of July fireworks working their way into the Louisiana and Illinois stories only to be overshadowed by the quiet Kansan describing the chemical makeup of a missile launch (his home can withstand a single megaton blast!), but other connections are elusive. The California couple give off a whiff of agoraphobia, although Smith never pursues the hint, before describing how they evolved their former framing business into a livelihood from their cats via calendars and the like. Linda Beech's revelation that she was a Japanese sitcom star has no bearing on her current love of nature, although it loosely connects her with Tregle. (A shot of Tregle motorboating through acres of water lilies is more beautifully shot than anything in the Hawaiian rainforest.) The one unifying bond among the five is that they're all perfectly happy with the status quo.

Still, Smith finds entertainment value, particularly with Skora's less useful mechanical marvels, such as a toilet which automatically opens and 'blooms' fake flowers, and his stories about his rooftop ski jump. The Louisiana and Kansas segments are interesting, if less amusing, while the California and Hawaii segments don't pass muster.

"Home Movie" is a documentary ditty that just barely sustains its 65 minute running time. Surely Smith could have found a few more eccentric homeowners (the Northeast goes unrepresented) in the United States to clarify and expound upon his theme.

"Home Movie" is the film equivalent of a lovingly rendered coffee table book. It good-naturedly shows five very different ideas of what some people call home. Bill Tragle owns a houseboat in Louisiana and harvests alligators for profit. Ben Skora resides in a Chicago-suburb prefabricated house from Sears that he bought and turned into an electronic wonderland. Ed and Diana Peden took ownership, at a bargain basement price, of a former Atlas missile silo near Topeka, Kansas and turned it into a cozy underground 20th Century castle. Linda Beech lives the life of little boys' dreams in her jungle tree house in the wilds of Hawaii. Finally, Californians Bob Walker and Francis Mooney own the quintessential cathouse - a home that is geared to the love and caring of their dozen cats.

Documentarian Smith gives a light, fluffy look into the humble abodes of some very individually minded people who take their housing seriously. The diverse dwellings are shown in a series of displays that lay their lives out for us to see. The offbeat owners are invariably honest and forthcoming as befits their individualistic tastes and lifestyles. Smith structures his unusual journey into America's heartlands with glimpses of, first, the funky homes of these individualists, then, the lives of the owners themselves. As the hour-long docu rolls on, we get to know the owners and their chosen life styles. They are a remarkable cross section of America and it is a pleasant and educational way (you learn that it is a bad idea to stick one's hand into the mouth of a 'gator) to spend 60 minutes.

Like a good coffee table book, you pick "Home Movie" up as a momentary diversion, but you can't help going through the whole thing from start to finish and see something not seen before, and that's what a documentary film should do.