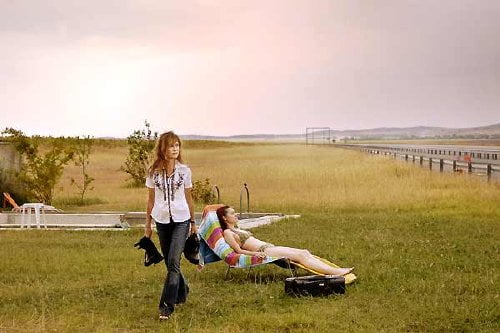 Marthe (Isabelle Huppert) and her family prize the peace and quite of their rural French home. The construction of a new highway only yards from their house began years ago but building process has been so slow that no one in the family even notices the eyesore anymore. Progress, though slow, is inevitable and the super highway finally opens and throws family life into turmoil in “Home.”

For years Marthe (Isabelle Huppert, "Gabrielle," "A Comedy of Power") has kept house and brought up three children while husband Michel (Olivier Gourmet, "Lorna's Silence") went to work, but each evening he parts his car opposite an unfinished highway and crosses it to reach the isolated house built smack on the other side, so close the family hang their outdoor footwear on a guardrail there, where they make their "Home."

Switzerland's submission for the Foreign Language Oscar is the kind of intriguing film which will provoke conversation among cinephiles, but not really the kind of film Academy members usually reward. Cowriter/director Ursula Meier's film isn't entirely successful - the ending seems a bit pat after what has come before it - but it is thoughtful and makes a drastic tonal shift successfully, a difficult feat.

The film begins as a colorful family comedy. Mom, dressed in feminine skirts and high heeled mules (when she's not wearing her stiletto heeled lace up booties), hangs laundry while eldest daughter Judith (Adélaïde Leroux, "Flanders," "Séraphine") sunbathes in a skimpy bikini. Middle math-whiz Marion (Madeleine Budd) and Julien (Kacey Mottet Klein), a typical young boy, walk to and from an unseen school every day. But their world, like the film, mostly exists around and inside their highway home. They play together - often nude, except for the prudish Marion - and all seem happy.

Then Julien says he's seen a road finishing machine down the road. News comes in over the radio that E57 will be opening. Suddenly the family is dealing with cars racing past just outside their windows. Marion becomes obsessed with carbon output and convinces Julien he's been poisoned. Judith disappears one day. Marthe is becoming more and more agitated and so Michel begins to brick up the house - from the inside, and color drains from the film (shot by Agnès Godard ("35 Shots of Rum")).

This suburban horror tale of a family's disintegration once modern life begins encroaching is reminiscent of such films as "The Cement Garden" and Michael Haneke's "The Seventh Continent," at least in its second half. Meier and her co-screenwriters have provided parallels in before and after behavior to illustrate psychological changes (Marion, for example, strips completely when her mother requests an article of clothing for the wash, exhibiting an ironic lack of privacy which her elder sister never did beside the road with her headphones on). The bright cheery home is gradually turned literally into a padded cell and the kitschy, bubbly music gradually turns dark and somber before vanishing entirely. Godard's cinematography is able to make us feel the move from sunshine and fresh air to dankness. Huppert's emotional response - essentially shutting down (in another of her crazy mama perfs) - affects the remains of her family, but while it is hinted at earlier that she has some kind of psychological problem that weds them to the house, the film can also be a little too ambiguous. It isn't necessary to spell everything out, but this film asks us to accept a very strange circumstance before making it even weirder and thus making the hopeful ending unearned.

Still, Meier has imbued her film with a lot of little psychological tells that keep one involved with this unique family and its breakdown. Better a flawed film like "Home" to talk and think about than one of the cookie cutter products that cram the multiplex.

“Home” could be called “Paradise Lost” as the eccentric family of five lives their unique life in their home abutting the unfinished freeway. The dad, Michel (Olivier Gourmet), drives across the deserted landscape to his job each day. The younger children, teenage Marion (Madeleine Budd) and youngster Julien (Kacey Mottet Klein), walk the long walk to and from the school bus stop while elder sister Judith (Adelaide Leroux) lies outside in her bikini, listening to LOUD music and catching some rays. Marthe works to keep her family together and happy.

This is where Paradise Lost begins when Julien, on one of his many bike rides along the deserted highway, sees a construction truck and men checking the road out. Things have been quiet for so long, the rest of the family does not believe the boy. But, when he comes home, covered in fresh asphalt they have no choice but to accept as true what he saw. Their peaceful existence is shattered when full-blown construction commences on the roadway and it is finally completed. When the first car travels down the finished freeway, to tumultuous press coverage, the floodgates are opened and, soon, the roadway is abuzz with traffic.

This is a nicely done character study of a family whose idyllic life ends because of “progress.” The highway is a metaphor of the consequence of this progress and the impact it has on this tiny hamlet of mankind. Moving from the richly filled, quiet life of Marthe and her clan to the hell that the road brings, the story (by a gaggle of Gallic scribes led by director Ursula Meier) has a unique arc and is a true family tragedy. Acting is fine across the board and the funky location is a character unto itself.