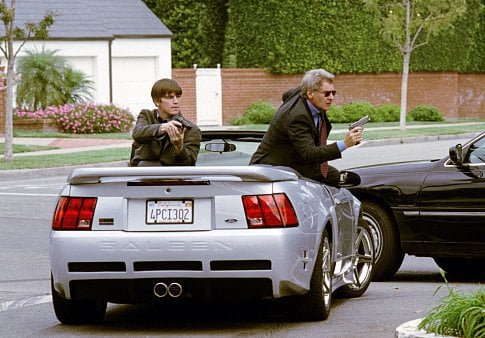 A pair of thugs enters a nightclub, take guns out of a hidden bag and proceed to blast the hell out of the rap band performing on stage. Are they music critics or is this a nefarious crime that brings LA detective sergeants Joe Gavilan (Harrison Ford) and K.C. Calden (Josh Hartnett) in to investigate? If you chose that latter then you might be ready to join the cops of "Hollywood Homicide."

As the murders are taking place Joe, who moonlights as a realtor, is trying to sell a white elephant of a house that he sunk all his money into in hopes of making a bundle. His boss, Leon (Keith David), calls him in to investigate the murders. He doesn't make the sale. Zen cop and budding actor K.C. is doing his own part-time thing as a yoga teacher for a room full of sexy young women when he gets the call to duty. This begins a tale about modern day LA detectives on the Hollywood beat as they juggle fighting crime and having another life and career outside the force.

Helmer Ron Shelton co-wrote the screenplay for "Hollywood Homicide" with 22-year LAPD veteran Robert Souza and you'd expect a degree of verisimilitude. Instead, they have a pastiche of comedic cop life as Joe and K.C., obviously of different minds, follow through on the investigation and seek other paths in their own lives. I'm surprised that Shelton, who has directed and often co-written some very good films, such as "Bull Durham" and "Dark Blue," seems to be going through the paces, and not much more, as the story plods along - by the hour mark nothing really happens and it's not until the 90 minute mark do we even have any action (save the opening, violent murder sequence).

Ford, who I have found to give the same performance over again lately, does manage to put a nice comic spin as Joe copes with trying to solve the murders of the members of H20Klick. But, besides being veteran murder detective he is also a struggling realtor and under investigation by Bennie Macko (Bruce Greenwood), head of LAPD Internal Affair. He is also up to his ears in debt, in the midst a lusty romantic relationship with radio psychic Ruby (Lena Olin) and, most of all, dealing with his flower power partner K.C. The writers push the premise of Gavilan's twin careers, especially when, while under interrogation by Macko's team, Joe keeps taking calls as he tries to broker another sale between movie producer Jerry Duran (Martin Landau) and the owner of the nightclub where the murders just took place, Julius Armas (Master P). The absurdity of the situation is forced and, to me, not very funny. The rest of Ford's perf is probably "Hollywood Homicide's" best asset. Enjoy the moment when Joe takes chase after the speeding bad guys on a little girl's bicycle.

Josh Hartnett doesn't get beyond two-dimensions as K.C. Calden. The detective/aspiring actor is in his own zone as he transcendentally searches for his center and imagines himself to be the next Brando - he is even preparing, during the investigation of the killings, for his small-time stage debut as Stanley Kowalski in "A Streetcar Named Desire," probably the high point of Hartnett's perf. There is no chemistry between Ford and Hartnett and it shows.

The main supporting cast is populated with talented thespians mostly hamstrung by the material. Lena Olin does her best as Joe's lover but has little to do except to be the attractive love interest. Bruce Greenwood is wasted as the vengeful Macko, whose ulterior motives are dumped on us late in the game. Isaiah Washington is the bad guy and could have been good but the scattershot script, too, does him in. Lolita Davidovich is given short shrift as Cleo, a Hollywood madam who, sometimes, helps Joe. Keith David tries to give something to the nothing role as Joe and K.C.'s superior, Leon.

Background supporting cast is an embarrassment of riches, so much so that it sometimes overshadows the main characters. Besides the sizable principal cast, the supporting character list is made up with a bevy of name players in small roles. Robert Wagner, Eric Idle, Frank Sinatra, Jr., Smokey Robinson, Gladys Knight, Martin Landau, Lou Diamond Phillips (priceless and effective as an undercover cop posing as a hooker named Wanda. He's such a babe) and a bunch of rap music notables fill the background.

Production is solid and the car chase through Hollywood, with Grauman's Chinese Theater as a focal point, is first rate - not as much fun as "The Italian Job" but well done. For the second time this summer the LA subway system plays prominent in a Hollywood production (again, see "The Italian Job" for a better use of the subterranean transit system).

"Hollywood Homicide" only works on a surface level and does little, if anything, to make it stick in your mind. I do like Ford, though.