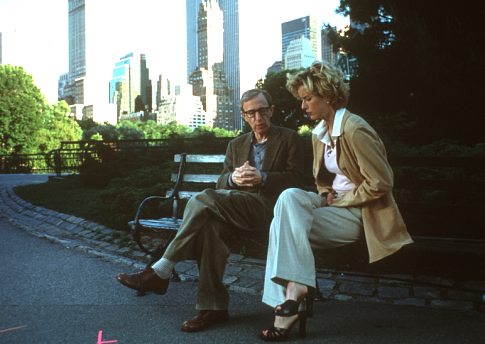 Director Val Waxman (Woody Allen) has two Oscars, but that's past history. In desperate need of a hit, Waxman's been reduced to shooting commercials to pay the bills for himself and his nagging, questionably talented girlfriend Lori (Debra Messing, TV's "Will and Grace"). When Val's given a shot from an unlikely backer, his producer ex-wife Ellie (Tea Leoni, "The Family Man"), the neurotic director reacts with a case of psychosomatic blindness just as shooting's set to begin in "Hollywood Ending."

Writer/director/star Allen makes wry observations on studio filmmaking, the French and his own career in this sweet slapstick comedy. "Hollywood Ending" features a coda that should have the Croisette cracking up when it opens the Cannes Film Festival.

As soon as Waxman gets his wish, everything goes wrong. He's forced to compromise with studio head Hal Yeager (Treat Williams, "The Deep End of the Ocean"), the epitome of the commerciality Val despises, as well as the man who stole his wife. His agent Al Hack (director Mark Rydell), whose office sports a poster for Waxman's "Manhattan Memories," negotiates a tenth of a percent after quadruple break even. His girlfriend uses emotional blackmail in order to get a part, his production designer (Isaac Mizrahi) wants to rebuild the first 24 stories of the Empire State Building, and the studio news department has OK'ed full onset access to backstabbing Esquire reporter Andrea Ford (Jodie Markell, "Safe"). Val can't get through a meeting with Ellie without rehashing her betrayal, which obviously consumes him. Is love blind? Awaking in his apartment that evening, Val discovers he can't see.

Val does get his way demanding a foreign cameraman (Lu Yu), whose Chinese translator (Barney Cheng, "Rollerball (2002)") comes in handy when studio flunky Ed (George Hamilton) bans Val's agent, the only one privy to Val's condition, from the set. Eventually, though, Ellie must be let in on the secret, and her loyalties are put to the ultimate test.

Allen's script is full of delightful filmmaking in jokes, the hilarious NY/LA contrasts first mined in "Annie Hall" and some masterful slapstick (with one glaring exception - Waxman has difficulty facing the person addressing him when he should be detecting the voice easily). In one early, endearing scene, Allen sits in the optometrist's office with glasses removed looking like "The Simpsons'" Millhouse, a child whose features (Woody's signature eyewear) haven't yet developed. A reference to Peter Bogdanovich is particularly well-timed.

Yet, Allen does allow too many story strands to taper off into nothingness. While he has terrific rapport with Leoni, every other female character is given short shrift (this from the man who's directed three Best Supporting Actress performances from his own scripts). Messing's merely a plot point. Waxman's female star Sharon Bates (Tiffani Thiessen, TV's "Saved By the Bell") is used for a throwaway joke. Cheng's character is developed to the point that he becomes interesting, then dropped, while Waxman's son Tony (Mark Webber, "Storytelling") is used for psychological heft that isn't warranted. Hamilton does the most with the least, but it's really only Allen, Leoni and Rydell who are full fledged characters.

In an ending that is anything but Hollywood, Allen finally sees the dailies that have cost him a cameraman and his producer's perplexity and forges a funny and unexpected path that finds him redeemed by a place that he's brilliantly both poked fun at and embraced at the same time.

"Hollywood Ending" is a bittersweet mix of the old, funny Woody Allen and the new, smaller-scaled one.

Galaxie Pictures needs a director to head their latest big-budget feature. Producer Ellie (Tea Leoni) is a strong advocate for her ex-husband, Val Waxman (Woody Allen), a neurotic has-been whose recent filmmaking career has been far less than stellar - mainly because of his demands as an "artiste." Ellie's fiancée, studio head Hal Yaeger (Treat Williams), against his better judgment, approves the choice, but no one expects the unexpected when Val is struck by hysterical blindness in Woody Allen's "Hollywood Ending."

This is not the tightest script to come from the word processor of Woody Allen, but it does rep a throwback to the old days when he was more absorbed with slapstick, neuroses and pithy one-liners about such things as Hollywood and life in LA. It begins with a discussion, at the highest levels of Galaxie Pictures, on who will direct their latest mega-budget production, "The City That Never Sleeps." Ellie lobbies for her ex as the perfect choice to direct the high-profile effort. Others, including Ed (George Hamilton), oppose the selection but the final decision rests in the hands of Ellie's paramour, studio honcho Hal. His loyalty to his fiancée clouds his better judgment and he agrees to give Val a chance. More significantly, he decides to honor the director's demand of hands-off and leaves the whole production in Ellie's charge.

Meanwhile, Val is at the breaking point as he plaintively phones his live-in girlfriend, Lori (Debra Messing), from the wilds of Canada complaining about the humiliation of having to do a deodorant commercial. Next thing you know, he arrives at their doorstep to announce that he has quit the well-paying job, despite the fact the he has not worked to any significant filmmaking capacity for a decade. Truth is, he was fired. With Val at absolute rock bottom, his agent, Al Hack (Mark Rydell), throws him the lifeline of the chance to direct "The City?" along with a decent salary (plus the extra perk of 1/10th of 1% of quadruple break even - wink-wink). Nervous of failure, Val takes the job but immediately acts the prima Donna, demanding a non-English speaking Chinese cinematographer (Yu Lu, in an under used capacity) and an art director (Neal Huff) who wants to rebuild all of New York, including Central Park and the Empire State Building (but only the first 24 stories), on a set. Finally at the point of turning his failing career around, Val is struck blind - hysterically blind.

Allen's screenplay follows Val as he and his agent/friend, Al, try to hide the affliction and still make a film. There are complications, though, as the closed production forbids outsider Al from being on-set. The conspiracy broadens as the cameraman's translator (Barney Cheng) is enlisted to keep up the sham but, soon, everyone starts to question just how the acclaimed director is shooting his revival tome. When the translator is summarily fired for not doing his job, Al, in desperation, appeals to Ellie to help get Val through the final stages of the film's production. Their past marriage and honest caring by Val's ex forces Ellie to help out. What transpires is a whirl of chicanery as Val's secret is jealously guarded, even as an Esquire reporter, Andrea Ford (Jodie Markell), snoops around the set (inexplicably, with the head office's permission) for a story.

The idea of being struck by hysterical blindness is an amusing premise, but as the film progresses the idea becomes less funny and more forced. For example, Val, as he tries to cover up his affliction while directing a $60 million budgeted flick, has to communicate with others no matter what. He gazes blankly into the distance, usually in the direction away from the person talking to him. Now, I don't presume to know how a blind person behaves, but I would think that anyone would direct their attention, sighted or not, toward said speaker. This is more a criticism of Allen's acting decision than a problem with the script, but the concept loses its humorous luster early on.

Another big problem is the character of Lori, Val's live-in girlfriend. Keep in mind, Waxman has a history of creating "art" films for himself rather than the audience - one of his colleagues accuses him of artistic masturbation. Why would a man like this, no matter how insecure, even have a relationship with a woman referred to, more than once, as trailer park trash? Plus, Lori is shuffled out of the picture early on and returns only as a device to throw a wrench in the rekindling (expected) relationship between Val and Ellie. Lori is little more than an unnecessary distraction from the main body of the story - a blind man making a film without anyone knowing of the affliction.

There are, however, a number of things in "Hollywood Ending" that are good and well done. The Woodman still has a flair for slapstick and absurdist humor and does his share of funny pratfalls. Woody's decades long persona, in his characters, as a rampant hypochondriac is revisited here to funny effect. His friends amusingly deride him for his imagined illnesses such as the Black Plague, Dutch Elm and hoof-and-mouth diseases. The 40's big band tunes, with the likes of Benny Goodman, Jackie Gleason (yes, the Great One was an orchestra leader before he became a TV icon) and Bing Crosby, are well sprinkled throughout the film (although, a couple of times the volume of the music overpowered the dialog).

The cast, led by Woody, is a collection of seasoned veterans that are equal to the task. Tea Leoni has matured into a solid acting talent, with a comic flair, and comes across as an ambitious and talented producer who maintains affection for the man who made her so crazy she left him because of his excessive self-absorption. Treat Williams fills the bill as Ellie's fianc and boss, Hal Yaeger, who, against his judgment, leaves his significant other in charge of Val and the production, without interference. Filmmaker Mark Rydell ("On Golden Pond") is outstanding as Val's agent and close friend, Al, a man that looks upon his client like a brother, not just a meal ticket (especially with Val's recent track record), and helps maintain the cover-up to the end.

Allen's longtime executive producers, Jack Rollins and Charles H. Joffe, continue their relationship with the Woody and have included many of Allen's past collaborators behind the camera. Santo Loquasto has earned two Academy Award noms for his production designs on two previous Allen films ("Radio Days" and "Bullets Over Broadway") and continues to provide quality here. While I will forever miss cinematographer Gordon Willis's collaborations with Woody, I have no complaints about first time Allen lenser, Wedigo von Schultzendorff, who maintains the filmic look that has been one of Allen's trademarks for years.

Woody may not have made a homerun with "Hollywood Ending" but he hits a solid double that may turn out to be a winner.