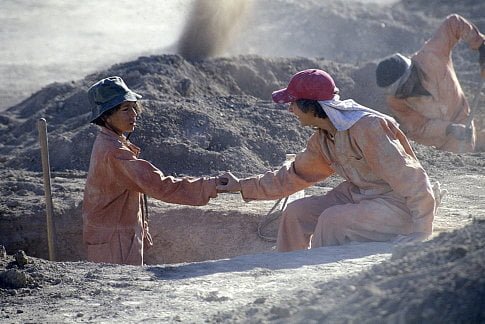 Stanley Yelnats IV (Shia LaBeouf) suffers the bad luck of an ancient family curse. He is sent to the detention center at Camp Green Lake for a crime he did not commit. The camp director, known as "the Warden" (Sigourney Weaver), and her right-hand henchmen Mr. Sir (John Voight) and Dr. Pendanski (Tim Blake Nelson), for mysterious and probably unsavory reasons, has Stanley and his campmates out in the blazing sun day after day digging "Holes."

Stanley Yelnats IV (Shia LaBeouf) has already inherited a multi-generational family curse when he gets sucked into another family legend when he's bonked off the head by a famous athlete's shoes. Accused of stealing the sneakers, which had been donated to a children's charity, Stanley's sent to Camp Green Lake, where Warden Walker (Sigourney Weaver) and right hand man Mr. Sir (Jon Voight) tell their charges that character will be built by heading into the hot desert daily to dig "Holes."

"Fugitive" director Andrew Davis, whose output since then has been lackluster ("Steal Big, Steal Little," "Collateral Damage") begins a return to form with this stylish children's adventure tale adapted by Louis Sacher from his hugely popular book. Interweaving two different period pasts which collide in the present, Davis distinguishes multiple characters within multiple story lines using nonlinear flashbacks without losing the audience. The film's drawbacks may be attributable to the source material (which I have not read). The warden's evil nature has no true conviction and the story's mixture of whimsy and dark drama don't blend well enough and resonate to make it a true modern classic (like "The Phantom Tollbooth"). This is more a solidly crafted entertainment.

Stanley's dad Stanley III (Henry Winkler, "The Waterboy"), who is about to have the family evicted from their tiny apartment because of the pervading stench his research into curing foot odor causes (note link to athlete's shoes), and his dad Stanley II (Nathan Davis) regale Stanley with the tale of his pig-stealing great-great grandfather who incurred the curse of Madame Zeroni (Eartha Kitt), made a fortune, then lost it in America to Kissin' Kate Barlow (Patricia Arquette, "Little Nicky").

When Stanley arrives at camp, he learns that the Warden is in search of something, hence the torturous hole digging. The Warden's history will be tied to Stanley's (nicknamed Caveman by his nickname-intense crew mates) when he learns that the dry lake bed wasn't always like this, which leads into the tale of schoolteacher Kathryn (Arquette) who traded her famous spiced peaches for repairs by Sam (Dule Hill, "Men of Honor"), a Black local onion grower. When they're spied kissing, the Warden's grandfather, who owned the town and fancied Kathryn, reacts viciously. Sam's killed on his boat and Kathryn begins the life of an outlaw in retaliation. Their onions and peaches union resonates into the present.

The kids are all naturals, LaBeouf a good Everyman leader. Byron Cotton has a lot of presence as the bossy Armpit while Brenden Jefferson's goggled X-Ray is the group's wheeler- dealer, a pubescent King Rat in the making. The group's rounded out by Jake M. Smith as Squid, Miguel Castro as Magnet and Max Kasch as Zig-Zag. The most endearing member is tiny Khleo Thomas ("Friday After Next") as Zero, the group's fastest hole digger whose past is also entwined with Stanley's. Voight is a hammy hoot as Mr. Sir, obsessed with shooting lethal yellow-spotted lizards - the man's got a knack for overacting with reptiles. Tim Blake Nelson ("The Good Girl") is the nerdy Mr. Pendanski, who actually believes he's working towards rehabilitating his charges. Weaver gets a lot of mileage out of her tag line with various intonations of "Scuse me?" delivering decidedly different messages, but we never get a sense that's she's truly evil, which would have added some extra zing to the film. This film's bad guy is ruthlessly goal-oriented, but a bit of a victim herself. Winkler adds quirkiness as the daffy inventor and is well supported by SNL's Siobhan Fallon as his accepting wife.

Camera operator Stephen St. John ("Collateral Damage") steps up to cinematographer with "Holes" and delivers with inventive camera moves. The film has a vibrant look which director Davis tweaks to include magical night skies.

"Holes" is an odd little film that explores the past's links to the present and the virtues of loyalty and determination.

Disney Studios production of "Holes" is based on the best-selling novel by Louis Sachar and adapted to the screen by the author. When Stanley is caught with a stolen pair of baseball cleats donated to charity, despite his pleas of innocence, he is incarcerated and sent to serve his time at Camp Green Lake, a dry desolate place that used to be a thriving lake 100 years before. Once their he meets his campmates - Squid, Armpit, ZigZag, Magnet, X-Ray and Zero - and learns that, every day, he must dig a hole in the desert five-feet wide by five-feet deep for reasons unknown. Stanley soon begins to question, in his mind, why the Warden demands that she be told of anything "interesting" the boys may find.

As Stanley's story unfolds we come to learn that "Holes" is a lot more than a "Cool Hand Luke" kind of prison for teenagers. Things become much more complex as we learn, through flashback, about a gypsy's (Eartha Kitt) curse brought upon the Yelnats family when Stanley's great-great-grandfather failed to meet the terms of an agreement with the ancient fortuneteller. Grandpa Elya left Europe and came to the Old West only to have his hard won fortune stolen by the notorious bandit Kissin' Kate Barlow (Patricia Arquette). Another flash back tells about an interracial friendship and romance, a century ago, when Green Lake really existed.

The story doesn't stop with these several threads, either. There is also the sidebar as Stanley's father, Stanley III (Henry Winkler), struggles to keep his home and find a cure for smelly feet. Little Zero (Khleo Thomas) is also intertwined with the Yelnats family's past and he becomes increasingly important as the story unrolls. Of course, day-to-day life in the prison and the interaction among the boys and their keepers, the sleazy Mr. Sir (with Voight giving a campy perf akin to his in "Anaconda") and none-too-bright Dr. Pendanski, doing the bidding of the demanding tyrant warden.

"Holes," with so many story threads interwoven in its cinematic tapestry, is a complicated tale that takes the viewer a while to sort through before it makes any real sense. Although Camp Green Lake is a juvenile delinquent facility, it appears more like something out of a Kafka novel or Orwell's "1984." The boys are subjected to the hard labor, daily, of digging the title holes and extremely harsh conditions, sometimes under tortuous duress. This alone seems to be material for adults rather than kids, but when the interracial relationship and its subsequent tragic end enter the picture, the film's PG rating seems too lightweight.

The film benefits from its veteran adult cast - Weaver, Voight, Nelson and Arquette do fine in giving some depth to their slightly drawn characters - and from a too underutilized younger cast. Of the kids, LaBeouf and Thomas fare best with the rest of the boys trying to create unique characters in a limited amount of time.

Production values are high across the board. Andrew Davis hasn't had a great track record since his popular "The Fugitive," but he has crafted an interesting youthful fantasy tale with "Holes." His longtime collaborator, cinematographer Stephen St. John, has come up with some stunning camera work as he shows the incredible scope of the Warden's private works project. As the camera rises above one hole to slowly show many from a great height, it is a nicely composed viewpoint. Other techs, like Maher Ahmad's stylish production design and Aggie Guerard Rodgers imaginative costume. Add to the film's overall quality.

Not being familiar with Sachar's works it was an effort to sort out what is going at first, but after a while, the serio-comic aspects came to the fore. Still, "Holes" flip flops between slapstick and black comedy, not always in a seamless way. It's really for the fans of Sachar's work.