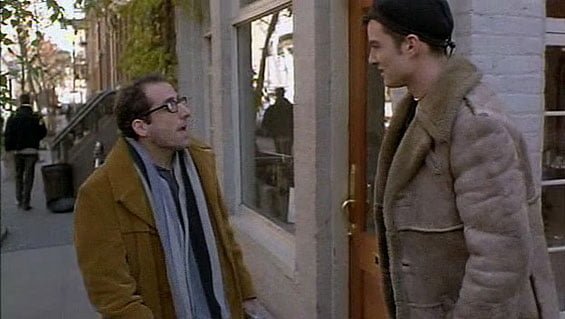 Alex succeeds in hooking up Elliot, a self-described funny looking, Jewish gay man, with good-looking Joey, who, it turns out, is attracted to Jewish men. While Elliot's flying high romantically, he's at wits end working with Alex. Alex has a dream, but his idea of a plausible plot line is having
models smuggle cocaine in breast implants.

The script, by real gay/straight writing team Christopher Livingston (who also directed) and Jaffe Cohen (who also produced) won Best Screenplay at the 1999 Los Angeles Independent Film Festival and US Comedy Arts Festival.  Yet despite Elliot's comic zingers and a general good heartedness, "Hit and Runway" is another cliched movie about first time filmmakers whose script
ends up mirroring their life.

Alex is a gentle lunkhead who homophobically insists his relationship with Elliot is only business until he's left without Elliot. His relationship with fellow writing class student Gwen (Judy Prescott, "Say Anything") doesn't take off until she removes her glasses (a cliche previously written into their joint script by Elliot as if it were inspired).

The film's production is subpar, with most action taking place in murkily lit, cramped apartment spaces. A scene in an indoor basketball court is like a breath of fresh air when the characters are finally given some space to exist in. Alex and Elliot are provided the obvious ethnic musical queues.

The good nature on display in "Hit and Runway" makes it difficult to dislike, but despite Jacobson's humorous efforts, it's not easy to recommend either.