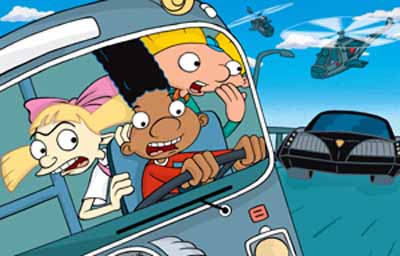 Arnold, Nickelodeon's football-shape-headed hero, is facing his greatest challenge, yet. Mega-tycoon Scheck (voice of Paul Sorvino) is buying up the neighborhood with plans to bulldoze it down and, in its place, put up a huge mall. But, when Arnold learns that a historical incident took place in the 'hood many years before he and his buddies are galvanized to put a stop to the corporate juggernaut and save the homes of his friends and family in "Hey Arnold! The Movie."

The popular kids' TV show makes the leap from the small to the big screen in typical Nick fashion, expanding the trials that Arnold and his friends must face to fit the feature length format. When the neighborhood, with its shops and homes, is being bought up by Greedy Scheck's company, Future Technologies Inc. (FTI), it looks like it's curtains for the 'hood. The resourceful Arnold uncovers a reference to an event that took place long ago called "The Tomato Incident" and learns that there exists a historical document that could save his part of town. It becomes a race for the large-headed boy and his friend, Gerald (voice of Jamil Smith), and his pig-tailed nemesis, Helga (voice of Francesca Marie Smith), who secretly harbors a major crush on Arnold (and is annoying as heck), to find the document and save everyone's homes from destruction.

"Hey Arnold! The Movie" is amiable kids' stuff that is directed at a specific, yet sizable, audience of fans of the popular TV show. Arnold is a good role model for his followers, showing intelligence, resourcefulness and an attitude that you can succeed at anything if you work hard at it. Since the adults in the 'hood are helpless to stop Scheck and his greedy plans, it is up to Arnold to toss a monkey wrench into the corporate workings - with the assistance of Gerald, Helga, neighborhood "spy kid" Bridget (voice of Jennifer Jason Leigh) and the City Coroner (voice of Christopher Lloyd).

The story, by the show's creators Craig Bartlett and Steve Viksten, will please the kids that will, inevitably, be drawn to see the feature length debut of their hero. Friendship, loyalty, right versus wrong, resourcefulness, imagination and intelligence are all elements put forth in "Hey Arnold! The Movie," making this the kind of entertainment that parents love to have their kids see. Adults, as you would expect, take a back seat to Arnold and his friends, either needing to be taken care of or put in their place for being greedy grownups.

Bigheaded Arnold has an equally big heart and his adventures are solid entertainment for the youngsters familiar with the TV series. It is a bit lightweight for most adults, but "Hey Arnold! The Movie" is not targeted for the big folks anyway.